Don't Save It for Later: Shout! Factory's "The English Beat Live at The US Festival" Detailed 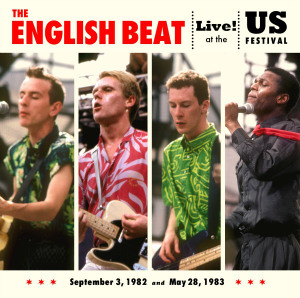 When we reported on the dueling reissue campaigns by Edsel and Shout! Factory over the catalogue of The (English) Beat, it was pretty clear that each had its own distinct advantages. Shout! Factory's The Complete Beat box set lacked some of the bonus content and all of the video footage in Edsel's 2CD/1DVD expansions of each of the ska band's three albums. On the other hand, they were going to include The Beat in its burgeoning series of live shows from the fabled US Festival. Now, we have some details of that release to pass along to you.

The Beat were the only band in the two-year history of Steve Wozniak's brilliant, failed outdoor festival to play a set for both festivals in 1982 and 1983. Both times, they played alongside several legends of the post-punk and New Wave scene, including The Ramones, The Clash, The Police, The Talking Heads, INXS, Wall of Voodoo and Men at Work. While the band wasn't long for this world after that second date, wrapping things up with the great What is Beat? compilation later that year, they put in two spirited performances that deservedly rank toward the top of the heap during both festivals.

It was a question, of course, as to which one of the performances was getting a release from the label, ever since the set was confirmed for inclusion with online orders of The Complete Beat. The answer? Both. The Beat's US Festival package - the first official live release from the band - will feature both shows on CD and DVD; nine tracks from the 1982 show and seven from the 1983 stand will be featured on the CD, a fitting highlights disc. The DVD, however, will feature both sets in their entirety. That's a 12-song set in 1982 and 14 cuts the following year.

And, happily, the package won't be reserved exclusively for anyone who bought Shout! Factory's box set; it'll be released on its own this September 18. Hit the jump for a full breakdown of the package, and keep an eye on this post when Amazon links go live!

The English Beat, Live at The US Festival (Shout! Factory, 2012)