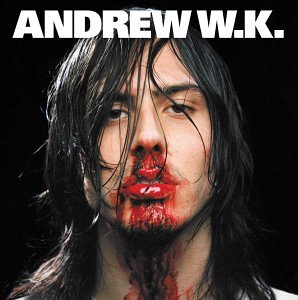 If you were paying attention to alternative rock in the early 2000s, the name "Andrew W.K." likely stirs up a boatload of emotions. Was he a fun-loving, hard-living, one man party machine? Was he a corporate construction? Was he a darker type of fraud, as suggested by producer "Steev Mike" (link NSFW and relatively nuts) who may actually just be W.K. playing a prank on his delightfully bewildered audience?

Whatever the case may be, Andrew W.K. is celebrating the recent 10th anniversary of his debut album, the hard-rocking I Get Wet, with a new deluxe edition filled with unreleased and truly off-the-wall bonus content.

Known for its hard-driving, almost violently upbeat songs ("She is Beautiful," "Party Hard," "It's Time to Party," "Fun Night") and shocking cover art (the image of the long-haired W.K. staring intently toward the viewer with his nose dripping blood all the way down his face is still pretty out there), I Get Wet wildly polarized critics - Pitchfork rated it an 0.6 out of 10 upon initial release, only to name it one of the 200 best albums of the decade - and made Andrew W.K.'s career as an experimental musician, partier, raconteur and motivational speaker (his latest speaking gig scheduled for next month is, no kidding, a My Little Pony convention).

For the double-disc reissue, W.K. commissioned new cover artwork (a photorealistic oil painting of the original sleeve by artist Gonzalo Garcia) on top of a booklet with new liner notes and unseen photos, and added a bonus disc of demos, alternate takes and live material. The live cuts are particularly notable, having been recorded through a specially-made system of microphones and monitors meant to amplify the sound to a much rawer degree, mimicking what the artist would hear while onstage. The cherry on top of this hard-partying sundae? A collector's edition, exclusive to U.S. residents, will feature an autographed booklet, an air freshener in the shape of Andrew W.K.'s bleeding nose from the LP sleeve and..."something"; an assortment of "mystery party items" including locks of hair, used plane tickets, receipts, pieces of cut-up jeans, photos and surely much, much more.

The packages are out on August 28; click below to place your orders - and if you do order the collector's set, do be sure to share what you got with your package.