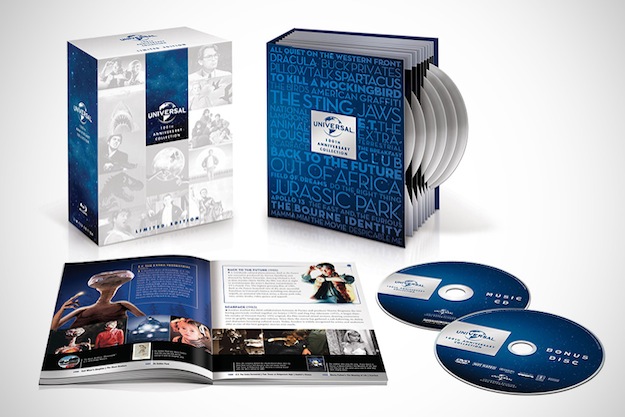 In 1912, an ex-dry goods merchant and owner of the nascent Independent Moving Pictures (IMP) studio stood in a New York office with five other movie moguls and made history.

These six men, organized by IMP founder Carl Laemmle, were keen to merge their businesses with an eye toward the growing big business of moviemaking. As they struggled for a title for their venture, Laemmle allegedly saw a wagon zip by on the street below with a grandiose name: "Universal Pipe Fitters." Turning back to the window, he announced the venture would be named Universal, an apt name for the magnitude of what they wanted to accomplish.

A century later, Universal is one of the biggest entertainment corporations in the world and the longest-running American film company. Dozens of their blockbuster films sit toward the top of the all-time box office lists, and their bi-coastal studio backlot/theme parks in Los Angeles and Orlando are prime vacation destinations. For film fans, Universal has been keen to celebrate their 100th anniversary this year, releasing not only stunning restorations of classic films on Blu-Ray (JAWS hit shops last week, with boxes devoted to Alfred Hitchcock and Universal Studios Monsters due in the next few months along with the hi-def debut of Second Disc favorite E.T. the Extra-Terrestrial) but at least one classic soundtrack in the form of the premiere release of Henry Mancini's original film score to the classic Charade.

On November 6, the studio will release their biggest box set yet - a collection of 25 of their most classic films with value-added bonus content. But soundtrack enthusiasts will want to keep an eye on this package for the possibility of exceptionally rare film music. We explain all after the jump.

The Universal 100th Anniversary Collection is already pretty impressive on a home-video level. From 1930's gripping All Quiet on the Western Front to 2010's family comedy Despicable Me, there are some phenomenal films to enjoy in this box set. And a bonus disc of special features includes not only featurettes on Laemmle and other iconic shapers of Universal Pictures but over a dozen shorts featuring stars of screen (Shirley Temple) and sports (Babe Ruth) and vintage cartoon characters Oswald the Lucky Rabbit (created by Walt Disney) and Walter Lantz's Woody Woodpecker.

But a 15-track bonus disc featuring selections from some of Universal's most memorable film scores shows some major promise for fans and collectors. Among the offerings are selections from Franz Waxman's score to Bride of Frankenstein (1935), which was only first released on a Rob Zombie-produced disc on the Hip-O label in 1999; Henry Mancini's work on Touch of Evil (1958), released on CD by Varese Sarabande in 1993; and music from modern-day classics including E.T., The Sting, Back to the Future and Jurassic Park - some of which have not seen their original LP programs on CD in 20 years or more. Most impressive of all, though, may be the potential for music from Bernard Herrmann's score to Hitchcock's Psycho (1960) - which, for all its deserved acclaim, has never seen an official release of the original score as heard in the film.

Of course, the actual tracks have not been specified by the studio. But who knows? We could see some real surprises on this disc. (Personally, we'd love a whole box set devoted to the music of Universal, but that's best saved for another post...)

Below you'll find a list of all the specs given by the studio for this new box as well as a link to place an order!

Films offered in the collection: