The One and Only: Salvo Expands Kirsty MacColl's Catalogue 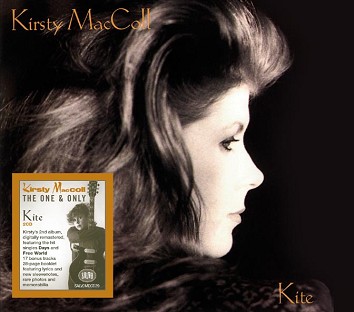 This week, Salvo Records takes a big step in getting people to stop saying they don't know about the late, famed British singer/songwriter Kirsty MacColl, by releasing new remastered and expanded editions of four of her albums.

The reissue campaign, titled Kirsty MacColl: The One and Only, happens in honor of what would have been MacColl's 53rd birthday. Salvo has prepped double-disc expansions of her albums Kite (1989), Electric Landlady (1991) and Titanic Days (1993), as well as the first-ever CD release of debut LP Desperate Character (1981).

MacColl's unique voice was first heard on her single for Stiff Records, the peppy "They Don't Know." Despite strong airplay, the single actually never charted on the U.K. charts, the victim of a distributor's strike keeping the single from experiencing any major sales. (In 1983, a cover by singer/actress Tracey Ullman, featuring MacColl on backing vocals, was a Top 10 hit in the U.K. and the United States.) After leaving Stiff, Kirsty cut her debut LP, 1981's Desperate Character, with the Top 20 hit "There's a Guy Works Down the Chip Shop Swears He's Elvis." Dropped by Polydor before she could release her follow-up album, MacColl signed to Stiff again, where she released singles including her biggest hit "A New England," originally recorded by Billy Bragg (and featuring new verses written for her by Bragg).

But when Stiff went bankrupt in 1986, MacColl again found herself without a label. That didn't stop her from working as a session vocalist, nor scoring another hit as featured vocalist on The Pogues' holiday chestnut "Fairytale of New York." Eventually, MacColl scored a new contract with Virgin, releasing the acclaimed albums Kite and Electric Landlady. Both records were produced by MacColl's then-husband, Steve Lillywhite, and featured a host of British rock luminaries, including David Gilmour and Johnny Marr. (MacColl covered The Smiths' "You Just Haven't Earned It Yet, Baby" in 1988, and Marr co-wrote and played guitar on several tracks of hers, including U.S. rock hit "Walking Down Madison.")

After 1993's Titanic Days, a one-off with ZTT Records, MacColl's writing turned increasingly to world music, including Cuban and other Latin-flavored styles. Unfortunately, her new direction was cut short in 2000, when, while diving off of Cozumel, Mexico, she was struck and killed by an errant boat. Her memory lives on, whether through catalogue projects (a three-disc retrospective and expanded editions of her Virgin and ZTT albums were released by EMI in 2005) or radio airplay.

For the new reissues, Salvo has not only put the original release of Desperate Character in print and on compact disc for the first time, but commissioned two-disc editions of her next three albums. Each feature a host of non-LP B-sides, tracks that did not feature on the previous expansions and even some unreleased material (an Electric Landlady outtake, an alternate remix of "Angel" and a live set on the Titanic Days expansion).

The One and Only album reissues are the first step in a MacColl reissue campaign; in 2013, Salvo will release a new compilation and a 2010 live tribute concert featuring Bragg, Alison Moyet, Catherine Tate and others. Meanwhile, these new reissues are available in the U.K. today (and shipping soon as imports to the U.S.)! Hit the jump for full track breakdowns and Amazon links, as always.