The Fruits of Another: Paul Carrack's Career Anthologized on Triple-Disc "Collected" 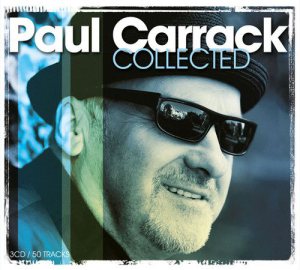 Like some sort of blue-eyed soul version of Zelig, Paul Carrack has been a fixture of British rock for decades. As frontman of pub-rock Ace, he took "How Long" to the U.K. Top 20 and to No. 3 on Billboard's U.S. chart. He joined Roxy Music for their reunion album Manifesto in 1979, then sang and played keyboards for Squeeze on their iconic East Side Story album in 1981, which yielded the unforgettable "Tempted."

Even while eking out a solo career post-Squeeze (enjoying U.S. hits with "Don't Shed a Tear" and "One Good Reason," the latter co-written by Squeeze lyricist Chris Difford) he was in no less than three notable bands: Nick Lowe and His Cowboy Outfit, a new venture for the venerable singer/songwriter/producer; Roger Waters' Bleeding Heart Band, which backed the ex-Pink Floyd leader on the When the Wind Blows soundtrack and Radio KAOS in 1987; and Mike + The Mechanics, the side-project of Genesis guitarist Mike Rutherford where he sang on hits "Silent Running" and the chart-topping ballad "The Living Years."

As Carrack releases a new album, Good Feeling, this fall, Universal U.K. recently celebrated his diverse career with a three-disc set of Carrack's work. Collected covers Carrack's whole solo career, as well as the best of his work with Ace, Squeeze, Mike + The Mechanics and others. For serious collectors, it's worth noting that the third disc contains a lot of obscurities, including several non-LP B-sides.

Collected is available now, and yours to order from Amazon U.S. and Amazon U.K. (Thanks to super reader Ludo for the tip on this one!) Hit the jump for the full track list!