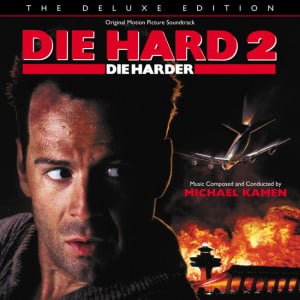 Like a sleeping giant, soundtrack reissue Varese Sarabande wakes only periodically and deliberately to release film and television scores from the vaults through their famed Soundtrack Club. In recent years, fans have bemoaned the lack of “Silver Age” scores – that is, more recent music from blockbuster films. That trend looks to change with the latest solid batch of limited edition reissues from Varese.

First up, following Varese’s own limited edition of Michael Kamen’s score to Die Hard in 2002 (and a subsequent further expansion by La-La Land last holiday season), the label expands Kamen’s score to the first sequel in the franchise. Die Hard 2: Die Harder had the improbable task of continuing the unlikely saga of hard-nosed hero John McClane; the New York detective this time found himself not in Los Angeles’ Nakatomi Plaza skyscraper, but Washington, D.C.’s Dulles Airport, where he has to battle another group of terrorists while his wife is stranded on a plane circling the air above. Though it was a critical and commercial success, outpacing even the first film financially, it’s easily the silliest in the series (soon to continue with a fifth installment next February). But Kamen’s score, which sees him reprising old themes and adapting classical compositions – in this case, Sibelius’ “Finlandia” – to great effect. This two-disc presentation is limited to 3,000 units.

Next, Varese premieres the score to The Red Pony, a television film scored by the legendary Jerry Goldsmith. The composer would win his first Emmy for the project, based on John Steinbeck’s short story collection of the same name. Clint Howard (Ron’s little brother) played a boy on a California ranch whose experiences with a young horse shapes his formative years. Maureen O’Hara and Henry Fonda (no stranger to Steinbeck on film, of course) played the parents; Fonda in particular had declared The Red Pony to be his favorite of Steinbeck’s words, and a diverse group of famous fans from Eric Clapton to Barack Obama have made themselves known over the years. Being a Goldsmith title, this set is also capped at 3,000 copies.

After the jump, one more expanded title and two reissues from the Varese catalogue – all from the 1980s – await you! 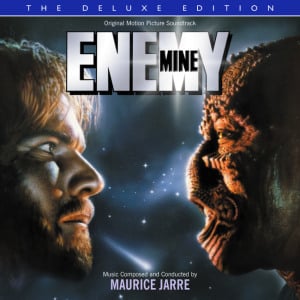 “Enemies because they were taught to be. Allies because they had to be. Brothers because they dared to be.” So read the poster for Enemy Mine, a 1985 adaptation of Barry B. Longyear’s sci-fi novella about two soldiers – one human, one alien – who crash land on a foreign planet in wartime and must work together to survive. Dennis Quaid and Louis Gossett, Jr. played human Willis Davidge and the reptilian Jeriba “Jerry” Shigan, and Maurice Jarre recorded a score that balanced synthesizers with traditional orchestral overtures. This new CD, limited to 1,500 copies (and, as of this writing, down to under 300), features the original 10-track LP augmented with more than twice as many unreleased and alternate cues.

Varese’s Encore Series, featuring extremely limited reissues of out-of-print Varese LPs, conclude this latest batch. There’s The Boy Who Could Fly, a coming-of-age film about a young girl and her friendship with an autistic neighbor, with a whimsical score from Bruce Broughton; and Man on Fire, John Scott’s score to the first adaptation of the A.J. Quinnell novel about an ex-CIA agent hired to protect a 12-year-old from kidnappers. (The latter theme, in an interesting full-circle twist, is likely best known for being tracked into, of all movies, the original Die Hard.) Both Encore scores are limited to 1,000 copies, and under 100 remain – so act fast. Order links and track lists are below!

Portions of this program originally released as Varese Sarabande VS-5273, 1990