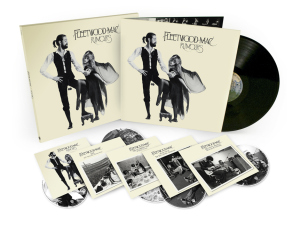 Ahead of the band's forthcoming tour, a new 4CD/1DVD/LP deluxe box set edition of their most popular album, featuring the original album on CD and vinyl, two discs of studio outtakes (including the one from the 2004 reissue) and an unreleased documentary. (Amazon U.S. / Amazon U.K.) A three-disc edition collects the album and the two new bonus CDs, so if you own the last expansion and can live sans DVD, you can pick the rest up for a reasonable fee. (Amazon U.S. / Amazon U.K.)

A new compilation of lesser-known, romantic album cuts, bolstered by - gasp! - the first new Destiny's Child track since the mid-'00s! Place your bets as to whether Beyoncé will include the tune in her Super Bowl halftime show on Sunday... (Amazon U.S. / Amazon U.K.)

Faithfull's incendiary, signature 1979 album has been expanded in the U.K. with some great audiovisuals, including rare and unreleased mixes. (Amazon U.K. / Amazon U.S.)

Among the titles in this batch: neat mixes of hits and deep-ish cuts from Andy Williams, The Highwaymen and Harry Nilsson; Sun-era sets for Jerry Lee Lewis and Carl Perkins and a disc of Box Tops singles, all in glorious mono.