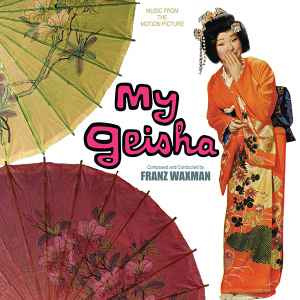 Kritzerland has a thing for Shirley MacLaine.

The label has just announced its ninth release of a score from a film featuring the Academy Award-winning actress and current Downton Abbey star.  Franz Waxman’s score to the 1962 Paramount film My Geisha is the latest to get the Kritzerland treatment.

As the titular geisha in a madcap, disguise-filled romp, MacLaine starred opposite Yves Montand, Robert Cummings, and Edward G. Robinson.  Norman Krasna (White Christmas, Let’s Make Love) brought his expertise to the mistaken identity plot, which was somewhat of a specialty of his.  Jack Cardiff, perhaps best known for directing the notorious Smell-o-Vision film Scent of Mystery, was in the director’s chair.  But in reissue producer Bruce Kimmel’s words, “what takes My Geisha to a whole other level is the radiant score by Franz Waxman (Sunset Boulevard, A Place in the Sun). There are many ways to approach scoring a comedy: you can accentuate the humor, you can underline the laughs, or you can try to make the music comic. Waxman’s approach was to score the story being told and to let the comedy speak for itself. Hence his music is filled to the brim with dramatic scoring and beautiful melody, including his exquisite main theme. That approach was perfect because it makes us care about the characters and the story.”

The film’s plot revolves around movie director Paul Robaix (Montand), married to famous actress Lucy Dell (MacLaine).  He wishes to have a success independent of his wife, so he departs for Japan to find a suitable lead for his film version of Puccini’s opera Madama Butterfly.  But he’s unaware that Lucy is in hot pursuit.  She disguises herself as a geisha, and wins the part.  But Lucy soon becomes threatened by Paul’s affections for her other identity, Yoko.

There's more after the jump, including the track listing and pre-order link!

As Madama Butterfly features prominently in the film, there are a few excerpts from the opera on the soundtrack, conducted by Waxman himself. Interestingly, the composer utilized no Puccini references at all in his proper score. Kritzerland’s My Geisha is the score’s official CD debut and includes the complete score.  The album has been remastered from the original three-track session tapes in stereo.  The few Madama Butterfly snippets have been included along with bonus material such as demos and alternate takes.

Franz Waxman’s My Geisha is scheduled to ship the last week of March, but pre-orders directly from Kritzerland usually ship one to five weeks earlier.  A limited edition of 1,000 copies, My Geisha can be pre-ordered at the link below.  You can also click below for a special bundle including My Geisha and another classic film soundtrack!

Selections from the score originally released on RCA Victor LOC-1070, 1962