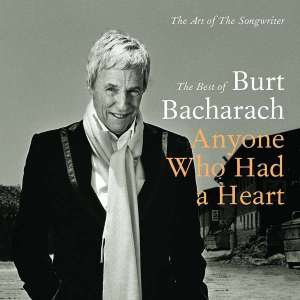 “Don’t Make Me Over,“ unbelievably, is not on the current track listing to Anyone Who Had a Heart.  (An earlier track listing at JPC.de included the song, along with 40 other tracks that have been excised from the most recent line-up.)  This collection’s title track, as produced and written by Bacharach and David and sung by Warwick in 1964, is present, along with four other tracks from the "Triangle Marriage" of Warwick, Bacharach and David.  The second disc traces Bacharach’s career from Jack Jones‘“Dreamin‘ All the Time“ (1962) all the way to Marianne Faithfull’s rendition of “If I Never Get to Love You“ (a 1963 song introduced by Lou Johnson but recorded by the British singer for her 1965 eponymous studio album).  Richard Chamberlain is heard with his original version of “(They Long to Be) Close to You,“ and another highlight is Adam Wade with the all-too-unknown “Rain from the Skies,“ which had the goods to become a pop hit but never did.  (The song did, however, become a bit of a reggae standard!)

All of the discs blend original, Bacharach-helmed versions of songs with cover versions from other artists.  The third CD is bookended with two  covers, Barbra Streisand’s take on “Alfie,“ and Diana Ross and Marvin Gaye’s “The Things I Will Not Miss“ written by Bacharach and David for Hollywood musical Lost Horizon and recorded by the Motown royalty for their Diana and Marvin album (but not released until a CD reissue).  These discs take in Bacharach and David’s film work such as What’s New Pussycat, After the Fox and Casino Royale, as well as their Broadway triumph with Promises, Promises.  Some of the reinvented tracks heard on the third disc include Elvis Presley’s “Any Day Now“ (his only studio recording of a Bacharach song), Aretha Franklin’s sublimely funky “April Fools,“ and The Stylistics‘ lush “You’ll Never Get to Heaven“ as produced and arranged by Thom Bell.  CD 3 ends with songs from Lost Horizon, also marking the end of Bacharach's time as Hal David's partner.

The fourth CD makes a case for what some might call “The Carole Bayer Sager Years,“ though there are also songs written with talents such as Bobby Russell (Tom Jones‘ dramatic “Us“), Paul Anka (Jackie DeShannon’s “I Don’t Need You Anymore“ from the film Together?, Elvis Costello (“Toledo“) and James Ingram and John Bettis (“Sing for the Children,“ arranged in retro Bacharach style not by Burt, but by Thom Bell).  This disc also includes Bacharach’s reunion with Hal David on Dionne Warwick’s 1993 “Sunny Weather Lover.“  (Stephanie Mills' 1975 For the First Time, released after Bacharach and David's "breakup," is also represented with one track.)  Here’s where there’s a bit of mystery: the earlier track listing showed 28 tracks on this disc, which would be more or less in line with the other discs.  The revised list reflects just 19 tracks, meaning that major songs from this period such as Warwick’s chart-topping “That’s What Friends Are For“ and Michael McDonald and Patti LaBelle’s “On My Own“ are both wholly absent from Anyone Who Had a Heart.  What the world does need now is a well-curated anthology of this latter period of Bacharach’s career, showcasing the hidden gems alongside the chart hits.