They've Still Got a Place in Our Hearts: George Jones, Marty Robbins Reissues Arrive From Morello

When George Jones died on April 26, 2013 at the age of 81, American song lost one of its all-time greats.  Yet Jones’ music lives on thanks to a steady stream of reissues drawn from his deep catalogue, including a recent two-for-one package from Cherry Red’s Morello imprint.  Jones inaugurated the Morello label last year with four albums on two CDs, and he’s returned to the roster with Jones Country and You’ve Still Got a Place in My Heart, from 1983 and 1984, respectively.  Morello’s second-ever CD came from another late country-and-western great, Marty Robbins.  Four more Robbins LPs have arrived from the label as paired on two CDs: El Paso City (1976) and Adios Amigo (1977); and The Legend (1981) and Come Back to Me (1982).  These albums are all making welcome appearances on CD.

Jones Country/You’ve Still Got a Place in My Heart rewinds The Possum’s story from Morello’s last two-fer, which joined Bartender’s Blues, from 1978 with 1983’s Shine On.  Jones Country arrived mere months after Shine On, in October 1983, while You’ve Still Got a Place in My Heart followed in May 1984.  Both of these Epic albums, like Shine On and so many before it, were produced by Billy Sherrill and recorded in Nashville.  Jones Country took its name from an outdoor music park owned by Jones in his home state of Texas; Jones and wife Nancy operated the park for a six-year period, through 1988.  Despite the tie-in, Epic released no singles from Jones Country, though it managed a respectable No. 27 Country placement nonetheless.  Jones remained fond of the material on the LP; “Radio Lover” and “Burning Bridges” would reappear on his 1989 album One Woman Man, and “You Must Have Walked Across My Mind Again” was re-recorded for 1992’s Walls Can Fall.  The album featured plenty of quality material.  “Hello, Trouble” had been a hit for Buck Owens, and John Anderson charted with his own “The Girl at the End of the Bar.”  Dennis Lambert and Brian Potter’s “Dream On” had been successfully recorded by both The Righteous Brothers and The Oak Ridge Boys prior to Jones’ rendition.

You’ve Still Got a Place in My Heart fared better than its predecessors on the country chart, hitting No. 17.  It features a bona fide Jones classic in the title track, written and first recorded by Leon Payne.  A No. 14 country hit for Con Hunley in 1978, Jones’ version went all the way to No. 3 Country.  Kris Kristofferson’s “Come Sundown” was another highlight, and Jones also recorded his own “I’m Ragged But I’m Right,” written in 1956.  But Jones’ music was always timeless.  The original album liner notes called him “The Master of the Sad Song,” but in truth, Jones was the Master of the Song.  The title to You’ve Still Got a Place in My Heart still rings true.

Jones’ two-for-one CD is available now.  After the jump, we have the scoop on Morello’s two releases from Marty Robbins! 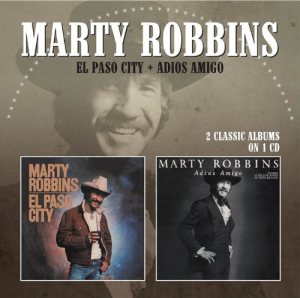 El Paso City returned Robbins to the top reaches of the Country Albums chart, actually becoming his first Country No. 1 LP.  It also returned the singer to familiar territory with its title track, and solidified his place once again at Columbia Records.  The C&W crooner had left Columbia for a three-year sojourn at MCA, a tenure which left him creatively and commercially unfulfilled.  When Robbins wrote “El Paso City” as a sequel to his most famous hit, he was filled with inspiration.  Like the album, the single of “El Paso City” hit pole position on the country singles chart.  So did “All My Souvenirs” from the LP.  El Paso City has been paired by Morello with its follow-up, Adios Amigo.  Robbins scored two more Top 10 hits with Adios via Bobby Vinton’s title song and the 1931 standard “I Don’t Know Why (I Just Do).”  This eclectic set also featured Robbins’ take on another classic, “My Blue Heaven,” his version of Bobby Darin’s “18 Yellow Roses,” and Mike Nesmith and Lynn Hargrove’s “I’ve Never Loved Anyone More.”  Billy Sherrill produced both albums in Nashville, with Robbins also contributing production to Adios. 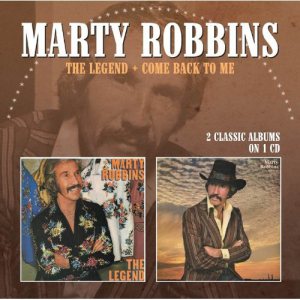 Morello jumps over a few albums and lands in 1981 for The Legend, pairing it with Come Back to Me from 1982.  The Legend, produced by Robbins and Eddy Fox, was another eclectic blend of country, pop and rock-and-roll.  He contributed a number of his own songs in addition to tackling Albert Hammond and Mike Hazelwood’s Hollies hit “The Air That I Breathe,” Waylon Jennings and Willie Nelson’s “Good Hearted Woman,” Vaughn Horton’s “Teardrops in My Heart” (best known in the recording by the Sons of the Pioneers from 1947) and Bob (Funny Girl, Carnival) Merrill’s “Honeycomb,” a No. 1 hit for Jimmie Rodgers in 1957.  What makes a legend, or The Legend, most?  For Robbins, it was the ability to record in all genres with ease.

Come Back to Me would prove to be Marty Robbins’ final release before his death in December 1982.  Produced in Nashville by Bob Montgomery, it was largely a mellow, romantic affair.  The title of the album derived from the album’s own Robbins original, “Lover, Lover.”  “Lover” was surrounded by the Top 10 Country single “Some Memories Just Won’t Die” on a pure country set also featuring tracks like Jerry Fuller’s “That’s All She Wrote” and Bob McDill’s ”The American Dream.”

All three of the Morello releases have been remastered by Alan Wilson and include brief liner notes from Michael Heatley.  (Alas, discographical information is absent.)  These rare classics from George Jones and Marty Robbins are available for order below.