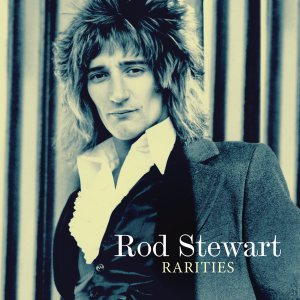 Earlier this year, Rod Stewart released Time, marking the return of Stewart the songwriter. Time found the one-time Mod in reflective mode. Rolling Stone praised its “lighthearted warmth” while The Guardian noted its “wistful, nostalgic love songs [and] thoughtful divorce laments.” Clearly, Stewart had found some inspiration following a decade-long sojourn into the Great American Songbook, classic rock and soul tracks, and even holiday music. These “covers” collections left many critics cold but were unquestionably successful, and among the most commercially rewarding music of Stewart’s long career. Still, it was a breath of fresh air in 2009 when Warner Bros. and Rhino celebrated his early sound with The Rod Stewart Sessions. The 4-CD box set produced by Cheryl Pawelski and Andy Zax premiered 63 unreleased recordings spanning a 25-year period of creativity. Mercury is revisiting that set with the September 3 release of Rarities, a new 2-CD, 24-track anthology. Rarities reprises 12 tracks from Sessions and adds other singles and one-offs, plus two previously unreleased live radio recordings.

The 12 tracks originally issued on Sessions represent alternates and early versions of songs from Stewart’s third, fourth and fifth solo LPs Every Picture Tells a Story (1971), Never a Dull Moment (1972) and Smiler (1974). An early version of Stewart’s signature hit “Maggie May” and an alternate of the Brewer and Shipley-penned “Seems Like a Long Time” represent Every Picture, produced by the singer and featuring the Faces save Ronnie Lane and Kenney Jones. Ron Wood, Andy Pyle and Danny Thompson took over bass from Lane, and Mick Waller stepped in for Jones on drums. Guitarist Martin Quittenton was another major player, co-writing “Maggie May” and helping to shape Stewart’s sound with his acoustic tone.

Never a Dull Moment (an accurate title if there ever was one) picked up where its predecessor left off, and featured much of the same crew plus Jones and Lane. From this album, Rarities includes embryonic versions of its biggest hit “You Wear It Well” (like “Maggie,” written by Stewart and Quittenton) and “Italian Girls,” plus a stripped-down alternate of “Los Paraguayos” and unique takes of two covers: the Etta James scorcher “I’d Rather Go Blind” and Jimi Hendrix’s “Angel.”

1974’s Smiler didn’t repeat the acclaim of Stewart’s past work, but the songs from its sessions heard on Rarities make a strong case for the LP. Stewart and Quittenton’s strong “Farewell” is a bit longer than the final album version. A Rod Stewart/Ron Wood composition, “Think I’ll Pack My Bags,” was never completed for Smiler, but turned up with new lyrics as “Mystifies Me” on Wood’s 1974 solo album I’ve Got My Own Album to Do… with Rod on backing vocals. “So Tired,” written by the solo Stewart, was originally recorded for Smiler but remained unreleased until 1995’s Handbags and Gladrags compilation. It’s heard twice on Rarities: once in the rough Sessions version and once in the Handbags version. The song’s evolution can also be charted with the alternate lyric of “Missed You.” That track, too, premiered in 1995 and is included here. Also from Handbags: outtakes “You Put Something Better Inside Me” and “Crying Loving Laughing Lying,” and a summer 1973 take of Cole Porter’s 1944 standard “Ev’ry Time We Say Goodbye” that anticipates Stewart’s Great American Songbook recordings by nearly 30 years. Rounding out the Smiler tracks are alternates of Carole King and Gerry Goffin’s “(You Make Me Feel Like A) Natural Man” and Bob Dylan’s “Girl from the North Country.”

What else will you find on Rarities? Hit the jump for more, plus the full track listing and pre-order links!

Rarities also includes both sides of the 1973 single “Oh No, Not My Baby” and “Jodie” (the A-side another Goffin and King tune!), the B-side “What’s Made Milwaukee Famous (Has Made a Loser Out of Me),” Stewart’s performance of The Who’s “Pinball Wizard” from the all-star symphonic album of Tommy, and two unreleased tracks. Both “Maggie May” and Elton John and Bernie Taupin’s “Country Comfort” were recorded by Stewart with the Faces for BBC Radio One, and make their commercial debuts on this new set.

Stewart diehards will likely own everything on this set except for the two unreleased radio tracks, but for those collectors who don’t already own The Rod Stewart Sessions and Reason to Believe: The Complete Mercury Studio Recordings (which includes all of the Handbags tracks and singles but not the Sessions material), Rarities is a reasonable introduction to Stewart’s alternate history. It arrives from Mercury Records on September 3 and can be pre-ordered below!