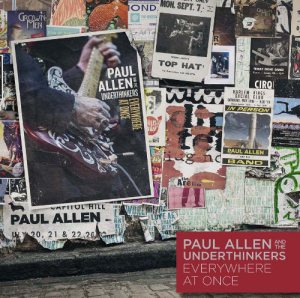 For years, Paul Allen has been leading a double life.  By day, he’s known as the co-founder of Microsoft, a company which needs no introduction.  He currently heads Vulcan, Inc.; its holdings include Ticketmaster, the Seattle Seahawks and Portland Trailblazers.  With an estimated net worth of $15 billion, Allen routinely ranks high on the Forbes 400, and his philanthropic activities add up to lifetime giving of over $1.5 billion.  But that’s only part of the story.  Allen is also a lifetime music devotee.  The founder of Seattle’s Experience Music Project Museum, he played violin from second grade, and guitar from age 16.  Today, Allen owns legendary guitars by the likes of Jimi Hendrix, George Harrison, and Eric Clapton, and his lifelong love of music has just translated into the release of the first album by Paul Allen and the Underthinkers.  Everywhere at Once has just arrived from Legacy Recordings, and features Allen as both songwriter and guitarist, joined by a Who’s Who of musical talent including Chrissie Hynde, Ann and Nancy Wilson, Joe Walsh, Derek Trucks, and Clapton’s frequent collaborator Doyle Bramhall II.  Everywhere at Once is Allen’s second major statement on record, following a 2000 album with his band The Grown Men.

Once Everywhere at Once establishes its likeably polished blues-rock feel, the pace rarely slackens.  Almost entirely produced by Bramhall and Justin Stanley, it showcases Allen as a committed songwriter and an electric guitarist beholden not just to his hero Hendrix, but to roots-rockers like Clapton, The Band and Delaney and Bonnie and Friends.  Though he doesn’t play on every song, Allen either wrote or co-wrote every track on the album with Bramhall, Ty Baillie, or his bandmates John Bohlinger (guitar), Doug Barnett (bass) and Tim Pike (vocals).  And if a man can be judged by the company he keeps, Allen has nothing to worry about; in addition to those fine musicians, David Hidalgo of Los Lobos also contributes guitar to nearly every track.

We take a closer look after the jump!

Allen and the Underthinkers came to the attention of catalogue specialists Legacy thanks to Ann and Nancy Wilson.  The Seattle-based sisters and bona fide rock legends open the album with their vocals on “Straw Into Gold.”  Nancy also plays mandolin on this muscular yet slick track, with Allen and Michael Landau on the searing electric guitar.  Rock sits comfortably alongside blues and balladry on the Underthinkers’ set.  Vocalist Tim Pike sets an anthemic modern rock vibe on “Pictures of a Dream.”  One of four songs on which he sings lead, it builds to an extended instrumental jam.  Pike takes on a John Mayer-esque timbre for “Big Blue Raindrops” and “Words to Make You Mine,” the latter a sweet, string-laden love ballad.  Pike’s vocals are also showcased on “Down Low.”  Its churchy organ and acoustic piano lend it an insinuating groove.

Chrissie Hynde of The Pretenders supplies the smoky and soulful vocal for the country-influenced “Rodeo” (“Stop staring out the window/And living in the past/This ain’t your first rodeo/And it’s not going to be your last”).  Another iconic voice, Joe Walsh, heads to the crossroads with “Six Strings from Hell.”  The James Gang alumnus and longtime Eagle also brought along his slide guitar for this enjoyably and appropriately heavy blues about a familiar theme: “The devil said son, I’m gonna make you play/You can have all the money, all the ladies, too/Let this sweet guitar do what it wants to do, yeah!”

“Divine” is reprised from the soundtrack of the 2012 film Magic Mike, with Amy Keys on lead vocals and strings enhancing the arrangement.  “Divine” is well-sequenced following “Six Strings from Hell,” with its heavenly bent set to another dark-hued melody (“Your moods change with the moon/You cast a spell and I’m not immune/When your body lay next to mine/I felt our love was beyond divine”).  “Healing Hands,” too, employs spiritual imagery (“There are so many who have tried to help/But they couldn’t get inside this hell I felt/I could ask for an angel sent down from on high/But if you’re there, I wouldn’t have to try…”) as sung by the emotive Wendy Motan.  Though Allen is absent from the track which he co-wrote with Doug Barnett, Derek Trucks “fills in” with a liquid guitar solo.  Ivan Neville’s organ further steeps the track in gospel.  Neville joins Moten for “Inside Out,” with a big, N’awlins-style brass arrangement and guitars from Bramhall, Hidalgo and Trucks; the Neville/Moten duo also lathers on the R&B for the funky “Restless.”  Doyle Bramhall takes the lead on “Cherries Fall,” which he co-wrote with Allen, who sits out on the recording.  It sounds very much in the vein of latter-day Eric Clapton, and Bramhall and Hidalgo scorch the earth with their dueling electric guitars on the track.

Though very much a guitar-focused album, the varied R&B, soul, gospel, blues, rock and Americana styles make sure that Everywhere at Once lives up to its name. Underscoring his commitment to music and education, the 60-year old billionaire guitarist will donate all of his profits from the album to the Experience Music Project Museum.  Though Allen may be moonlighting in music, his love and respect of songwriting tradition is evident on the LP with its well-crafted and impeccably produced tracks.  It’s no small feat that his musicianship blends in well with that of Walsh, Hynde, the Wilsons, Trucks, Hidalgo and his fellow Underthinkers.  Don’t think too much, just listen – clearly, even the world’s 53rd richest man (per Forbes) can cut loose, get funky and create memorable music.

You can order Everywhere at Once by clicking right here!