There continues to be plenty to experience from Jimi Hendrix.

On August 20, Legacy Recordings and Experience Hendrix restored the original 2000 “purple box” to the catalogue in a new reissue adding four bonus tracks (B-side “The Stars That Play with Laughing Sam’s Dice,” “Peace in Mississippi” from the “Valleys of Neptune” CD single, and live versions of “Burning of the Midnight Lamp” and “Like a Rolling Stone”) to the original 4-CD configuration.  On November 5, the ongoing Hendrix campaign will continue with two new releases.

The Miami Pop Festival took Hallandale, Florida’s Gulfstream Park by storm when The Jimi Hendrix Experience, Frank Zappa’s Mothers of Invention, Blue Cheer, The Crazy World of Arthur Brown and others took the stage on May 18, 1968.  Promoted by dolphin activist and Flipper trainer Ric O’Barry and soon-to-be Woodstock guru Michael Lang, the event drew an estimated 50,000 people and inspired Hendrix’s “Rainy Day, Dream Away” when his planned performance on the second day was cancelled due to a rainout.  Lang dubbed the event as “where the seeds of Woodstock were sown.”

The new Jimi Hendrix Experience: Miami Pop Festival preserves the closing set of Hendrix, Mitch Mitchell and Noel Redding, and introduces the first recorded stage performances of "Hear My Train A Comin'" and "Tax Free.”  Recorded by Eddie Kramer, the disc also includes the band’s spirited versions of "Fire," "Hey Joe," "I Don't Live Today,” "Purple Haze" and more.  In addition to the complete finale set, Miami Pop also includes two selections from the Experience’s afternoon show (“Fire” and “Foxey Lady”).   Grammy Museum Executive Director Bob Santelli supplies a new essay, and the booklet also features rare and never-before-reprinted photographs of the event.  It is being released as both a single CD and a limited edition numbered double 12" audiophile vinyl set cut by Bernie Grundman and pressed on 200-gram vinyl.

After the jump: we’ll look at companion release Hear My Train A Comin’!  Plus, we have complete track listings and pre-order links for both titles as well as the recently-reissued Jimi Hendrix Experience box set!

Recently-unearthed footage of The Experience’s Miami Pop set is just one of the many highlights you’ll find on Hear My Train A Comin’, an American Masters documentary premiering on PBS on Tuesday, November 5 – the same day that the extended version of the film is released on DVD and Blu-ray from Experience Hendrix and Legacy.

Directed by Bob Smeaton (The Beatles Anthology, numerous previous Hendrix projects), Hear My Train A Comin’ draws on home movie footage taken by Hendrix and Mitchell along with other personal archive memorabilia such as photographs, drawings and letters to chronicle Hendrix’s brief but blazing journey from sideman to superstar.  The two-hour film premieres just weeks before what would have been Hendrix’s 71st birthday on November 27, and also includes interview footage with Mitchell, Redding, Kramer, Billy Cox (of Band of Gypsys), Paul McCartney, Steve Winwood, Billy Gibbons, Dweezil Zappa and Dave Mason.  Hendrix’s friend Faye Pridgeon, girlfriend Linda Keith (the girlfriend who introduced Jimi to future manager Chas Chandler), and designer Colette Mimram (who created the beaded jacket Hendrix donned at Woodstock) all offer added insight into Hendrix the man.  Hear My Train concludes with footage shot just twelve days before Hendrix’s untimely death at the age of 27, filmed at his final performance in Germany in September 1970.

Hear My Train A Comin’ hits stores on November 5 in both DVD and BD formats along with the CD and vinyl issues of Miami Pop Festival!  You can order all titles just below!

All tracks recorded on May 18, 1968 at Gulfstream Park, Hallandale, Florida. 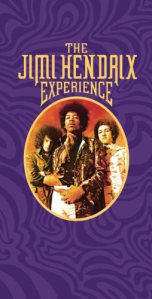