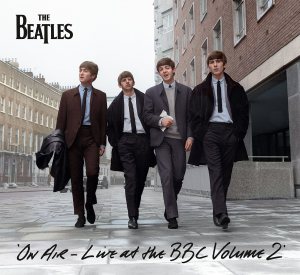 The worst-kept secret of this fall's upcoming release schedule is finally out - and we're shouting, "Yeah, yeah, yeah!" After weeks of speculation, Capitol Records has finally confirmed the November 11 arrival of The Beatles' On Air - Live at the BBC Volume 2.  Its 63 tracks - encompassing 40 musical performances (37 of which are previously unreleased) and 23 selections of on-air, in-studio repartee - were all recorded for the Fab Four's 1963-1964 BBC radio performances on shows such as Pop Go the Beatles and Saturday Club.

This new collection, available in 2 CD and 180-gram vinyl formats, is the eagerly-awaited sequel to 1994's Live at the BBC, a U.K. No. 1/U.S. No. 3 release. [That title, too, arrives on November 11 in a newly-remastered edition.]  None of the tracks here overlap with those released on that original anthology. A full ten of the songs on On Air were not recorded by The Beatles for EMI in the 1960s, and two of these songs make their debuts here: Chuck Berry's "I'm Talking About You" and Stephen Foster's "Beautiful Dreamer." As The Fabs frequently revisited repertoire at the BBC, six songs heard on the 1994 set are reprised here in different performances: Berry's "Memphis, Tennessee," Little Richard's "Lucille," Chan Romero's "The Hippy Hippy Shake," Ray Charles' "I Got a Woman," and two tracks the band learned from Carl Perkins' records, "Glad All Over" and "Sure to Fall."

All told, no fewer than 275 unique performances by John, Paul, George and Ringo were broadcast over the Beeb’s airwaves between March 1962 and June 1965.  88 distinct songs were played, meaning that some songs were performed numerous times and others just once.  On Air takes listeners back to the period when the BBC primarily broadcast live music only; George Harrison once recalled that “we used to drive 200 miles in an old van down the M1, come into London, try and find the BBC and then set up and do the program. Then we’d probably drive back to Newcastle for a gig in the evening!”

Still on the ascendant, the group recorded songs for 39 shows in 1963 alone.  One marathon day that year – July 16 – yielded 18 songs for three Pop Goes the Beatles shows, recorded in less than seven hours!  Saturday Club was another BBC favorite.  One particular rarity here is The Beatles’ “Happy Birthday Dear Saturday Club.”  In 1980, John Lennon remembered, “We did a lot of tracks that were never on record for Saturday Club – they were well recorded, too.”  Paul McCartney concurred.  “We’d been raised on the BBC radio programs. One of the big things in our week was Saturday Club – this great show was playing the kind of music we loved, so that was something we really aspired to.”

There's more after the jump, including the full track listing and pre-order links!

You’ll hear The Beatles talking to DJs Brian Matthew and Alan Freeman and Pop Go the Beatles hosts Lee Peters and Rodney Burke. On Air also includes the candid interviews recorded for the Pop Profile series in November 1965 and May 1966.  Of the more familiar songs, On Air features never-before-released versions of “And I Love Her,” “Please, Please Me,” “If I Fell,” “Do You Want to Know a Secret,” and the Music Man favorite “Till There Was You.”

Kevin Howlett and Mike Heatley have followed in the footsteps of Sir George Martin, producer of the 1994 BBC collection, in assembling On Air.  Guy Massey and Alex Wharton have remastered all tracks at Abbey Road Studios (where else?), and Howlett provides copious notes in the 48-page booklet.  Beatlefans take note that Howlett’s hardcover tome for Harper Design, The Beatles: The BBC Archives, arrives in stores on October 29, not long before the release of On Air.   The book’s 336 pages chronicle the band’s recordings for the BBC – on both radio and television – in truly definitive fashion.

Ringo Starr commented in 1994, “You tend to forget that we were a working band. It’s that mono sound. There were usually no overdubs. We were in at the count-in and that was it. I get excited listening to them.”  Chances are you will, too.  Look for The Beatles’ On Air: Live at the BBC Volume 2 from UMe’s Capitol Records label on November 11.  You can pre-order below!