Back to Ocean Boulevard: Eric Clapton's "Give Me Strength: The '74/'75 Recordings" Expands Three Vintage Albums 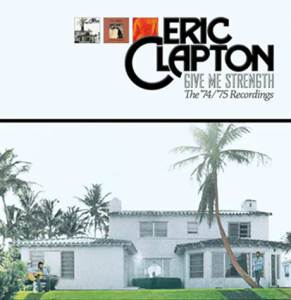 What’s better than one deluxe edition of an Eric Clapton album?  How about three?  And how about if they’re housed in one package?

On December 10, Universal Music Group will unveil the 5-CD/1-Blu-ray box Eric Clapton – Give Me Strength: The '74/'75 Recordings, featuring remastered and expanded versions of 461 Ocean Boulevard, There’s One in Every Crowd and E.C. Was Here, plus additional material and a Blu-ray of surround mixes.  Housed in a hardbound 60-page book, the box set is an exhaustive compendium of Clapton’s seminal "comeback" recordings between April 1974 and June 1975.  Give Me Strength follows Universal’s past boxes dedicated to Derek and the Dominos’ Layla and Other Assorted Love Songs and Clapton’s 1977 Slowhand, and includes:

When Clapton scored in 1974 with 461 Ocean Boulevard and its chart-topping single “I Shot the Sheriff,” both on Robert Stigwood's RSO label, the guitar god was emerging from a period of relative inactivity.  Following the November 1970 release of Derek and the Dominos’ sole long-player Layla and Other Assorted Love Songs and the ensuing tour at the end of that year, Clapton kept a low profile for much of 1971 and 1972 to battle an ongoing drug problem.  (His participation in The Concert for Bangla Desh was one appearance during that dark period.)  Two January 1973 concerts yielded the September release of Eric Clapton’s Rainbow Concert, on which he was joined by fellow rock royalty including Pete Townshend, Ronnie Wood, Ric Grech, Steve Winwood and Jim Capaldi.  In early 1974, he found time to appear in Ken Russell’s starry film adaptation of Townshend’s Tommy.  But Clapton signaled that he truly was out of the darkness – for the time being, at least – with the arrival of 461 Ocean Boulevard, so named for a Golden Beach, Florida residence where the cover photograph was shot.

We have plenty more after the jump, including the full track listing and pre-order links!

The Tom Dowd-produced 461 Ocean Boulevard, recorded at Miami’s Criteria Studios, featured Clapton as leader of a band including George Terry, Dick Sims, former Domino Carl Radle, Jamie Oldaker, and Jesus Christ Superstar songstress Yvonne Elliman.  (Trivia Note: There are a few Bee Gees connections to the album.  The Gibb Brothers also called RSO home and recorded many of their most memorable hits at Criteria.  Elliman would go on to achieve a U.S. No. 1 hit with the Gibbs' “If I Can’t Have You,” while their frequent collaborators Karl Richardson, as engineer, and Albhy Galuten, playing piano and keyboards, also worked on Ocean Boulevard.)  Anchored by the smash hit reinterpretation of Bob Marley's “I Shot the Sheriff,” the LP soared to No. 1 in the United States and No. 3 in the United Kingdom.  Universal’s 2004 2-CD Deluxe Edition added five bonus tracks and a Live at Hammersmith Odeon, London disc recorded on December 4 and 5, 1974.  Of the five session outtakes appended there, all of which had been previously released on various Clapton compilations, all but one (“B Minor Jam”) is reprised on the new box set.  The Hammersmith disc also hasn’t been included, though tracks from the concert were included on E.C. Was Here.

In March 1975, just months after the July 1974 release of Ocean Boulevard, Clapton issued There’s One in Every Crowd, recorded with the same band and producer. Following the success of the reggae-flavored “I Shot the Sheriff,” the group traveled to Jamaica to record the LP.  It didn’t meet the same success as its predecessor, however, perhaps because that album was still fresh on listeners’ minds.  The single “Swing Low, Sweet Chariot” – a reggae version of the gospel staple - did make the Top 20 in the U.K., as did the album itself.  In the U.S., the album only reached No. 21 on the Billboard 200.  For its first expanded edition in this box set, Universal has added five outtakes (two previously unreleased) and both sides of the 1975 single “Knockin’ on Heaven’s Door” b/w “Someone Like You.”

E.C. Was Here followed There’s One in Every Crowd, and the live record – preserving 1974 and 1975 tour performances with his Ocean Boulevard/Crowd band – served as a reminder that Clapton hadn’t lost any of his primal blues power as a guitarist.  Though the original album, released in August 1975, included just six tracks, two were from Clapton’s Blind Faith Days – “Presence of the Lord” and “Can’t Find My Way Home.”  Recent hit “I Shot the Sheriff” wasn’t even included on the album overseen again by Tom Dowd.  Over the years, more tracks recorded for E.C. Was Here have trickled out on various compilations and boxes.  For its appearance on Give Me Strength, E.C. Was Here has been expanded to 16 tracks over 2 CDs, and has also been fully remixed.  Four never-before-heard tracks from the Long Beach Arena concert of July 20, 1974 are among the added treats here.  The setlist is now much more diverse, with additions from the Cream catalogue (“Badge”), Ocean Boulevard (“I Shot the Sheriff,” “Willie and the Hand Jive/Get Ready”) and One in Every Crowd (“The Sky is Crying”).

The fifth CD, The Freddie King Criteria Studios Sessions, collects four tracks – including the full-length, 22-minute “Gambling Woman Blues” - recorded when one of Clapton’s heroes, guitarist-singer King (1934-1976) joined him in Miami for a rip-roaring jam session.  The Blu-ray premieres surround guru Elliot Scheiner’s new 5.1 mix of 461 Ocean Boulevard plus a couple of bonus tracks as well as the original quadraphonic (4.0) mix.  A wholly different 5.1 mix produced by Simon Climie and mixed by Mick Guzauski was issued on SACD in 2004.  The quad mix of There’s One in Every Crowd is also included; it was previously available on a DTS disc so the BD appearance is a significant sonic upgrade.

John Lynskey provides new liner notes for Give Me Strength’s book, which also includes photographs and behind-the-scenes images.  In addition to the CD box set, the original three albums will be reissued on vinyl as a 3-LP set.  You can order Give Me Strength: The '74/'75 Recordings, due in the U.S. on December 10, at the links below!