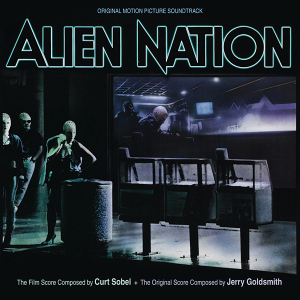 This week has seen some great archival soundtrack releases courtesy of Intrada and Kritzerland - all featuring some big names in the film score world.

Kritzerland's latest title is already shaping up to be a hot one: a greatly expanded double-score reissue from the cult classic Alien Nation. This 1988 film featured James Caan and Mandy Patinkin as partnered cops in a future Los Angeles where a race of aliens, called Newcomers, have landed on Earth and have done their best to fit in with our planet's culture. The catch, of course, is that Patinkin is the first Newcomer detective on the LAPD. The unlikely pair eventually have to solve a case that takes them into the criminal underbelly of the Newcomer culture. The film was successful enough to spin off a short-lived TV series, five subsequent TV movies and a host of comics and novels.

The music of Alien Nation has an intriguing pedigree: Jerry Goldsmith originally wrote a strongly thematic, electronic-dominated score for the film before it was significantly re-edited. Composer Curt Sobel stepped in to record a new, somewhat darker and noir-inspired score, while Goldsmith reused his Alien Nation theme for the 1990 spy film The Russia House. (The theme was in fact rejected once before, for Oliver Stone's Wall Street.)

While Varese Sarabande released Goldsmith's score years back, Kritzerland's double-disc set remasters and presents both scores, with Sobel's appearing on CD for the first time anywhere. (The score on this release was prepared in part from a cancelled album.) Limited to 1,200 copies (and likely selling fast), Alien Nation is shipping now.

After the jump, find out what Intrada's scared up from Elmer Bernstein and The Walt Disney Company!

Intrada's first release of the month is the premiere of Elmer Bernstein's beloved score to The Miracle (1959). This score to an epic drama, set during the Napoleonic Wars and starring Carroll Baker and Roger Moore, is perhaps one of the saving graces of the film; Bernstein's score, with its Spanish influences and a scale that recalls his work for 1956's The Ten Commandments, had the misfortune of being attached to a film that paled in comparison to the other epic drama released the same week: William Wyler's Ben-Hur. But Bernstein himself was such a fan that he started his own private label in the 1970s, making a re-recorded highlights LP its first release. This double-disc set collects the entire score in its original mono presentation, including eight adaptations of period pieces interspersed throughout the film.

Intrada's also continued their rich Disney partnership (though this, like The Miracle, is a limited title in their Special Collection series) with a release of John Debney's score to the spooky comedy Hocus Pocus, for its 20th anniversary. Bette Middler, Sarah Jessica Parker and Kathy Najimy star as a trio of witches resurrected in present-day Salem, who attempt to fully regain their powers by stealing the life force from a group of resourceful kids. Hocus Pocus has gained considerable cult status, and this disc, featuring a score by John Debney (as well as a haunting additional theme written by originally intended composer James Horner), will surely delight fans of the film.

All three titles are available to order below!