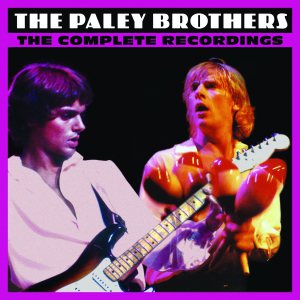 If The Brill Building had survived as the fulcrum of pop songwriting activity through the 1970s, chances are that Andy and Jonathan Paley would have been found in a cubicle there, turning out one infectious pop nugget after another like “Come Out and Play” and “Here Comes My Baby.”  As it turned out, the category-defying Paley Brothers were men out of time.  Singers as well as songwriters, they were signed to the Sire Records roster between the Ramones and Talking Heads, and managed to bridge the gap between Shaun Cassidy and, say, The Patti Smith Group.  After one EP, one LP, and some one-offs, however, The Paley Brothers disappeared.  Andy and Jonathan stayed in the music biz, with Andy notably working with Brian Wilson and overseeing film and television soundtracks from Dick Tracy to Spongebob Squarepants while Jonathan produced bands including the Dogmatics and Shrapnel.  Real Gone Music has just compiled the definitive anthology of the brief but blazing career of Andy and Jonathan as The Paley Brothers – The Complete Recordings.  This 26-track, non-chronologically arranged compendium, with 11 never-before-heard songs including one produced by Phil Spector, is one of the most deliciously upbeat releases of the year.  The Paley Brothers used the music of their own heroes as a jumping-off point, but created memorable songs that have earned their own place in the canon.  And now those songs can come out from the underground.

Jimmy Iovine (Bruce Springsteen, American Idol) helmed the Sire debut of the Paleys, a four-track EP recorded in a small New Jersey studio in 1976.  All four tracks from that EP are reprised on The Complete Recordings, and they’re treats one and all.  The Paleys let the stylistic hallmarks of their forebears come through loud and clear, but their two-part harmony and rawer sound kept them from descending into mere pastiche.  And so “Come Out and Play,” with Roy Bittan of the E Street Band on piano, plays like a marriage of Brian Wilson, Neil Sedaka and The Vogues.  “Rendezvous,” on which Bittan also appeared, is a Beach Boys twist on the Spector sound – and the Paleys would return to that well many times, each with creative and affectionate results.  (The legendary Beach Boy leader’s influence on the Paley Brothers’ ouevre is particularly apparent in the vocal phrasing.)  “Hide and Seek,” with its wailing saxophone, touches on Spector while also evoking The Rascals of “A Girl Like You.”  Its bubblegum lyrics (“Tried to remember baby way back when/I was eleven, you were ten/You and me, we were so carefree/Each and every day, all we’d do is play hide and seek!”) are rendered with what must have been a refreshing lack of irony.  Thanks to a rambunctious guitar, “Ecstasy” is the hardest-rocking of the quartet of songs, but its effortless melody and bright, teenager-in-love lyrics keep it light.  (“Come Out and Play” was written by both Paleys; Andy composed “Hide and Seek” and “Rendezvous” solo, and “Ecstasy” was the work of Billy Connors.)

Earle Mankey (Sparks, The Runaways, The Three O’Clock) was selected to produce The Paley Brothers’ 1978 full-length Sire debut.  Jonathan and Eric Rose played guitar, Andy handled keyboards and harmonica, Jan Uvena played drums, and Jim Haslip and Leigh Foxx shared bass duties.  Adding a layer of verisimilitude, the album was recorded at The Beach Boys’ Brother Studios.  Every track from The Paley Brothers is represented on The Complete Recordings, but fans and collectors alike should know that they’re included in never-before-released alternate takes or mixes – not in the original album versions.  Mankey didn’t dissuade the brothers from their well-crafted homages, but brought out the originality in their compositions, too.  The relatively stripped-down instrumentation married to sunny, hook-filled melodies and youthful lyrics lent The Paleys a distinct sound in the mid- to late-seventies rock landscape.

There's more after the jump!

The LP expanded the brothers’ sonic palette while still staying true to their early sixties-style rock-and-roll roots.  This was another collection of songs with gleaming melodies and straightforward lyrics – and oh, those tight harmonies!  The yearning “Lovin’ Eyes Can’t Lie” was a rare ballad, while another joint composition by Andy and Jonathan, “You’re the Best,” sparkles as a showcase for Jonathan’s pristine falsetto.  “Tell Me Tonight,” per the copious liner notes in The Complete Recordings, was inspired by The Spinners’ Philly soul, and while it doesn’t evoke Thom Bell’s production style, it’s a sleek slice of dark, rhythmic soul.  Some country-flecked covers spiced up the LP such as a twangy, Everly Brothers-styled take on The Browns’ “I Heard the Bluebirds Sing” and Mel Tillis’ “Stick with Me Baby” (also previously recorded by...The Everly Brothers!).  Buddy Holly and Bob Montgomery’s crackling “Down the Line” got a modern treatment infused with a punk edge.

A couple of “side tracks” appear here: the enjoyable run through Ritchie Valens’ “Come On, Let’s Go” with the Ramones from the Rock ‘n’ Roll High School soundtrack, and “Jacques Cousteau” performed by Andy with Elliot Easton, Greg Hawkes and David Robinson of The Cars, and Erik Lindgren of the Rising Stars.   This quirkily eccentric, rip-roarin’ surfin’ ode (“Friend of whales/Friend of sharks/Friend of all the little fishies that glow in the dark!”) was credited to The Young Jacques, and fits in perfectly here.  Equally kooky is the never-before-released “Theme from Fireball XL5,” from the 1962-1963 British children’s television show, which was given a Del Shannon-ish makeover by Jonathan.

Eleven songs, including “Fireball XL5,” make their first-ever appearances on The Complete Recordings, including two live cuts – complete with the appreciative screaming of teenage girls - from the brothers’ Madison Square Garden show opening for Hardy Boy Shaun Cassidy.  These studio outtakes are every bit as irresistible as the recordings actually released by Sire.  A crashing piano introduces “Here Comes My Baby,” the opening track of The Complete Recordings, and the song unfolds like “Da Doo Ron Ron” on steroids.  It bursts with a jolt of energy that never lets up as the melody cascades like one of Brian Wilson’s Spector-inspired records.  The imprint of the “First Tycoon of Teen” can also be felt via the sleigh bells on “Sapphire Eyes.”  A song like “Here Comes My Baby” shows that the Paleys could pull off their own sonic update of an Ellie Greenwich/Jeff Barry-esque song as produced by Spector, but the chance to work with Barry and Spector must have still been impossible for Andy and Jonathan to pass up.  Spector took the brothers into Gold Star Studios (where else?) to cut them on his and Barry’s “Baby, Let’s Stick Together,” which he first recorded with Dion. The sludgy arrangement from 1975’s Born to Be with You turned ebullient for The Paley Brothers’ version, which amazingly has remained in the vaults all these years.  Spector – about to produce the Ramones’ End of the Century for Sire - enlisted Wrecking Crew members Hal Blaine, Don Randi, Julius Wechter, Ray Pohlman and Steve Douglas for the song.  It’s clear that the magic hadn’t abandoned any of them as it’s one of the best tracks here.

The Brian Wilson influence recurs on the guitar-driven power-pop (albeit at an atypical, almost six-minute length!) of “Here Comes the Invisible Man.”  It’s awash with Beach Boys flourishes in the vocals, but Complete Recordings goes one better: Wilson himself appears singing inimitable background vocals on the catchy, uninhibited “Boomerang.”  Still other newly-unveiled tracks reference the early sounds of the British Invasion, like the Beatles/Dave Clark Five hybrid “She’s Eighteen Tonight” and the unbridled rock-and-roll of “Spring Fever.”  The song’s pounding piano, crunchy guitars, handclaps and euphoric “Wooooos” warrant a cry of “yeah, yeah, yeah!”

The Complete Recordings includes a 16-page booklet with numerous photographs and images of memorabilia plus liner notes from Gene Sculatti and Sire’s Seymour Stein. Producer-compilers Jonathan and Andy also contributed their memories to the notes, but there’s no mention of the alternate mixes or explanations as to why a particular mix was chosen over the original.  Remastering credits are likewise absent, but the tracks pop out of your speakers as they should.  The Paleys have confirmed that there’s enough material for another volume – not to mention the original album mixes from The Paley Brothers’ debut LP.  Come on, let’s go...you and I will be in ecstasy with Volume Two!