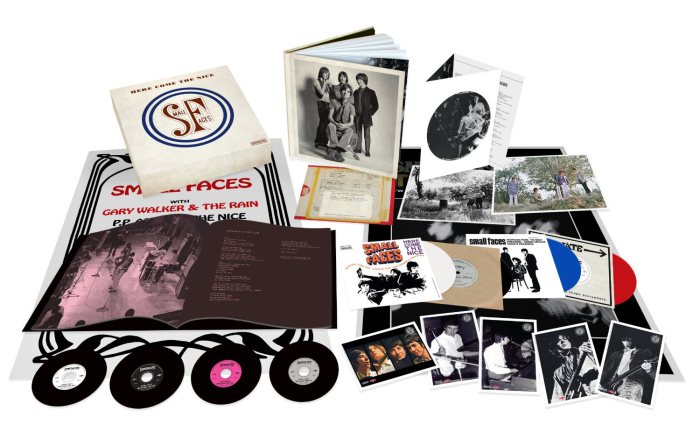 The culmination of the recent Small Faces reissue series from the Charly/Snapper label is set for arrival in January: Here Come the Nice: The Immediate Years Box Set 1967-1969, a lavish 4-CD, 3-EP box set containing “every [one of the band’s] worldwide hit single A & B side on Immediate Records” plus rare and previously unreleased material, “remastered from recently-discovered original master and multi-track tapes.”  The set has been produced under the supervision of surviving band members Kenney Jones and Ian McLagan, both of whom have signed certificates to be included in each one of the limited edition box sets available in the U.S. on January 28 exclusively at Amazon.com.  The box is limited to 3,000 copies worldwide.

The first disc compiles 20 original Immediate mono single sides, while the second and third discs premiere 34 previously unreleased alternates recorded at Olympic, Trident and IBC Studios.  The fourth CD features 21 more previously unreleased outtakes and alternates, plus live material from the Small Faces’ Newcastle City Hall gig of November 18, 1968.  Three replica vinyl EPs are also included.  The first of these, Small Faces Album Sampler, was originally released as a one-sided promotional single to coincide with the band’s first Immediate album, and features excerpts of album cuts along with deejay Tommy Vance’s announcements.  The second EP is a French “Here Come the Nice” with the title track mixed slightly faster, and the third EP is the French “Itchycoo Park” release.  A replica of the original Olympic Sound Studios one-off acetate pressing for Andrew Loog Oldham for the song “Mystery” is another key component.

Here Come the Nice is available on January 28 from Amazon U.S. only.  Due to territorial restrictions, the set is not being offered on Amazon U.K. and retailer Burning Shed has indicated that it will cancel any orders placed from within the United Kingdom.

After the jump: you’ll find the contents of our original post detailing previous Small Faces reissues, and then a complete track listing and pre-order link for the new box set! 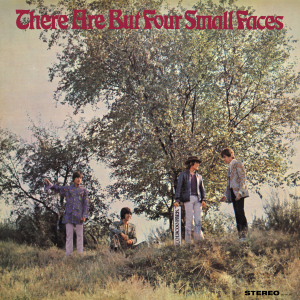 LAST UPDATE 3/6/13: Following last year’s acclaimed remasters of four Small Faces albums from the Universal and Charly labels, the U.S. label Varese Vintage is getting into the act with a new CD release from the Rock and Roll Hall of Famers.

1967’s There Are But Four Small Faces was the U.S. equivalent album to the eponymous U.K. release of the same year from Steve Marriott, Ronnie Lane, Ian McLagan and Kenney Jones. In this era, the practice of releasing unique albums for the U.S. and U.K. markets was commonplace, and the 14-track British release was whittled down to 12 tracks for U.S. consumption. Yet the differences between the albums went further than that. Seven songs out of the original 14 were dropped (“Something I Want to Tell You,” “Feeling Lonely,” “Happy Boys Happy,” “Things Are Going to Get Better,” “Become Like You,” “All Our Yesterdays” and “Eddie’s Dreaming”) and five previous U.K. singles were added (“I’m Only Dreaming,” “I Feel Much Better,” and three notable hits, “Here Come the Nice,” “Itchycoo Park” and “Tin Soldier”). The result is a very different album that is returning to CD in its original, unaltered sequence; a 1991 CD added a couple of alternate takes, a 1997 release from Castle Communications appended the five U.S. tracks to the end of its Small Faces reissue, and of course last year’s 2-CD Small Faces also contained all of the songs from both editions.

On April 30, Varese Vintage will reissue There Are But Four Small Faces, with restored original American cover artwork, on CD. All tracks are in stereo including new, exclusive stereo mixes of “I’m Only Dreaming” and “My Way of Giving.” You'll find a full track listing below, at the bottom of this post!

ORIGINAL POST [LAST UPDATED 2/16/12]: On December 7, 2011, The Small Faces were announced as inductees into the Rock and Roll Hall of Fame, marking a long overdue honor for the quartet of Steve Marriott, Ronnie Lane, Kenney Jones and Ian McLagan. The only head-scratching aspect of the recognition is that Small Faces is sharing it with Faces, the group formed by the remaining members plus Rod Stewart and Ronnie Wood once Marriott departed for Humble Pie. Faces had a very different musical sound than its predecessor, but now Small Faces can bask in the spotlight alone with the release of four Deluxe Editions from the British arm of Universal Music Group.

Small Faces (Decca, 1966), From the Beginning (Decca, 1967) and Small Faces (Immediate, 1968) will all be reissued as 2-CD sets, while the band’s acknowledged masterwork, Ogdens’ Nut Gone Flake (Immediate, 1968), will be the recipient of a 3-CD set. These follow the general format of the well-regarded Kinks reissues from Universal, containing the original albums in both mono and stereo (where applicable) plus a plethora of bonus material. All four sets will arrive in the United Kingdom on May 7.

Like so many other young British bands of the era, the Small Faces’ earliest musical aspirations were in emulation of their rhythm-and-blues idols. But, like The Who, the mod scene called to Marriott (lead singer/guitar), Lane (bass/vocals), Jones (drums) and Jimmy Winston (organ). After proving themselves with gigs in London and environs, the group members were signed by the notorious Don Arden, father of Sharon Osbourne and soon-to-be manager of Electric Light Orchestra and Black Sabbath, among others. Arden secured a deal with Decca Records, and Marriott and Lane set about to hone their talents as songwriters. After a moderately successful first single (“What’cha Gonna Do About It,” cribbed from a Solomon Burke song, and written by Ian Samwell and Brian Potter) and a less successful follow-up (“I’ve Got Mine”), Winston was ushered out of the band, replaced by Ian McLagan. The Marriott/Lane songwriting team was born with “Hey Girl,” and the Top 10 single led to the band’s first album, simply titled Small Faces. Even better was their original “My Mind’s Eye,” which headed straight for the top, despite being an unfinished demo! The Small Faces were on their way to rock supremacy at least in the U.K., maintaining high visibility on television programs and onstage. They would have to wait for (moderate) American success, though.

By the end of 1966, the band had severed ties with Arden, unhappy with both his punishing tour schedule and refusal to allow them the luxury of studio time to properly craft long-playing albums. 1967’s From the Beginning wasn’t a true Small Faces album, but rather an LP cobbled together by Decca after the band had decamped for new manager Andrew Loog Oldham and his hip Immediate Records label. Still, the album isn’t without its pleasures, from the budding psychedelia of “Yesterday, Today and Tomorrow” from the Marriott/Lane team and blazing covers of Del Shannon’s “Runaway” and Smokey Robinson’s “You’ve Really Got a Hold on Me.”

The band announced its Immediacy with its second LP in as many years called Small Faces. Though still rooted in R&B and mod sounds, this Small Faces and engineer Glyn Johns took the psychedelic sound experimentation a step further, placing the band at the cutting edge. Their Immediate debut single “Here Comes the Nice” heralded the new sound, a rather overtly drug-influenced song. The next single on Oldham’s imprint was the sun-kissed psychedelic pop ode, “Itchycoo Park.” It became the Small Faces’ first of two charting singles in America, and likely remains the band’s best-loved song today. “Tin Soldier” followed “Itchycoo” onto the charts on both sides of the pond, and featured fellow Immediate artist P.P. Arnold on backing vocals. The restless band, though, didn’t feel that their pop success accurately represented their sound or their ambitions, and so Ogdens’ Nut Gone Flake was devised.

Recorded in 1968 over five months in at least four studios, it was the album the band had always hoped to craft, more than just a loose assemblage of songs. Every bit as quintessentially “British” as the Kinks’ Village Green Preservation Society, it remains one of the most distinct psychedelic albums ever recorded. Ogdens combined soul, orchestrated pop, R&B, folk and comic, whimsical narration by comedian Stanley Unwin about “Happiness Stan.” (Goon legend Spike Milligan reportedly turned the band down when offered this gig!) Marriott even adopted different voices for the LP, including a thick cockney dialect. Ogdens announced itself with its round cover replica of a vintage tobacco tin; the unusual design and timely, visceral music paid off when the album hit No. 1 in the band’s native England. In the U.S., however, it placed at a disappointing No. 159.

By the end of 1968, Steve Marriott was gone, reportedly frustrated at the band’s inability to break out of the prescribed pop mold. Kenney Jones later reflected that the band wasn’t able to perform Ogdens live and therefore couldn’t expose the full breadth of its sound to the public. (It was performed as a whole live just once, for the BBC.) A greatest hits-and-rarities double album, The Autumn Stone, arrived in late 1969 from Immediate, but by then, the band had dissolved. (1970’s First Step, though by Faces, was credited in North America to Small Faces. Later in the seventies, the band would reunite with some personnel changes, before breaking up again in 1978. Steve Marriott died in 1991, the victim of a tragic fire believed to be caused by his lit cigarette when he fell asleep. Ronnie Lane succumbed to multiple sclerosis in 1997 after a valiant fight with the disease.)

The Small Faces’ catalogue has been in a bit of disarray in the compact disc era, with various labels churning out multiple releases over the years. This Universal series of Deluxe Editions looks to rectify that, as it’s expected to append singles and alternate mixes to each album. Track listings have recently been revealed by a number of e-tailers, as well as on the band's Facebook page. You'll find those below, along with order links.