It might be a typical day in Dogpatch, USA, but it’s far from a typical one around these parts, for Sony’s Masterworks Broadway imprint has unveiled its first three releases of 2014 – each one a rare album never previously available in the compact disc/digital era.  Next Tuesday, January 14, Masterworks will reissue the Original Motion Picture Soundtrack to the movie musical Li’l Abner, arranged and conducted by Nelson Riddle.  Next month, on February 18, comes the spoken-word Original Broadway Cast Recording of Edward Albee’s Tony Award-winning Who’s Afraid of Virginia Woolf? starring Uta Hagen and Arthur Hill.  Finally, on March 18, Masterworks revisits the Golden Age of the television musical with two rare soundtracks starring Robert Goulet: Brigadoon and Kiss Me, Kate.

Oh, happy day!  Between 1934 and 1977, newspaper readers delighted in Li’l Abner, the comic strip adventures of the denizens of Dogpatch, USA.  Controversial cartoonist Al Capp’s colorful coterie of characters – among them Li’l Abner, Mammy, Pappy and Daisy Mae Yokum, Marryin’ Sam, Moonbeam McSwine, and The Shmoo – were instruments of Capp’s biting satire, and at its height, Abner was reportedly read by 70 million Americans, or more than a third of the country’s then-total population.  Though a Li’l Abner film arrived in 1940, and songs were recorded about the character throughout the forties, a full-fledged Broadway musical didn’t arrive until 1956. Starring Peter Palmer, Edie Adams, Stubby Kaye, Tina Louise, Julie Newmar and Charlotte Rae, and sporting a score by Johnny Mercer and Gene DePaul, director Michael Kidd’s production ran for 693 performances.  A film version arrived from Paramount in 1959, with the stage show’s co-book writers Melvin Frank and Norman Panama on board as director and producer, respectively.

Columbia Records issued both the Original Broadway Cast Recording and the Original Motion Picture Soundtrack, the latter of which is finally arriving on CD-R and digital download from Masterworks Broadway on January 14.  Many of the stage show’s actors reprised their roles (including Palmer, Kaye, Newmar and ensemble member Valerie Harper), and Nelson Riddle was tapped to arrange and conduct the score.  He and choral arranger Joseph J. Lilley received the movie’s only Oscar nomination.  Columbia’s stereo soundtrack album was actually a re-recording/re-editing of the score for home listening, as was a common practice of the day.  This long-unavailable album will be released exclusively at MasterworksBroadway.com on January 14 in a limited quantity of Manufacture-On-Demand (MOD) CDs as well as digital download.  The CD-R will be available through Arkiv Music on February 11, plus downloads through other digital service providers the same day.

After the jump, we have details on Virginia Woolf and the Robert Goulet two-fer, plus full track listings! 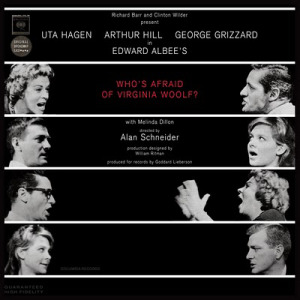 Edward Albee’s searing Who’s Afraid of Virginia Woolf? , with its expert, chilling blend of comedy and drama, proved controversial from the start.  The 1962 play, directed by Alan Schneider, starred Arthur Hill and Uta Hagen as the warring married couple, George and Martha, and George Grizzard and Melinda Dillon as the younger couple who visits their home, Nick and Honey.  Though selected to receive the Pulitzer Prize for Drama by that award’s drama committee, Woolf never took the prize home.  The Pulitzer’s advisory board reportedly objected to the play’s profanity and sexual themes, and declined to award a Pulitzer for Drama that year.  It hardly hurt Woolf, however.  The play has been regularly revived including returns to Broadway in 1976, 2005 and 2012.  The 1966 film version famously starred Richard Burton and Elizabeth Taylor opposite George Segal and Sandy Dennis.  In 1963, Columbia Masterworks released a four-LP box set preservation of the original stage cast, produced for record by legendary Columbia chief Goddard Lieberson.  Who’s Afraid of Virginia Woolf? still retains the power to shock, appall and enthrall, and it will be released exclusively at MasterworksBroadway.com on February 18 in a limited quantity of MOD CDs as well as digital download.  The CD-R will be available through Arkiv Music on March 18, plus downloads through other digital service providers the same day. 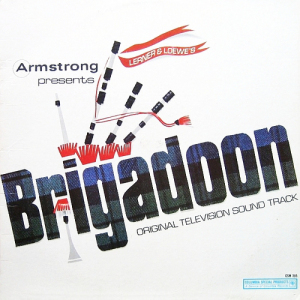 Last but not certainly least is Masterworks’ reissue of two vintage television musical soundtracks starring the late, great Robert Goulet.  ABC-TV showcased the dashing young singing actor, who made such a memorable splash as Sir Lancelot in Alan Jay Lerner and Frederick Loewe’s 1960 musical Camelot, in live broadcasts of Lerner and Loewe’s Brigadoon in 1966 and Cole Porter and Sam and Bella Spewack’s Kiss Me, Kate two years later in 1968.  Both classic musicals proved a comfortable fit for Goulet’s smooth and dramatic baritone.  Returning to Lerner and Loewe’s lush melodies, Goulet starred in Brigadoon opposite future Columbo star Peter Falk and the “truly scrumptious” ingénue Sally Ann Howes (a Lerner and Loewe veteran of the West End Paint Your Wagon and Broadway My Fair Lady).  Kiss Me Kate also featured perfect casting.  As the flamboyantly bickering actors (and ex-husband and wife!) Fred Graham and Lilli Vanessi, Goulet starred opposite his then-current wife Carol Lawrence (West Side Story) with supporting roles taken by Michael Callan and future Arrested Development matriarch Jessica Walter. Brigadoon / Kiss Me, Kate, available together for one price, will be released exclusively via Masterworks Broadway on March 18 in a limited quantity of MOD CDs as well as digital download.  The CD-R will be available through Arkiv Music on April 14, plus downloads through other digital service providers the same day.

You can check out all three titles below!  We will add order links as soon as they are active!