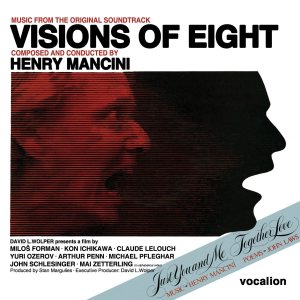 The U.K.’s Vocalion label is dedicated to exploring the corners of music catalogue too often overlooked by other labels: dance bands, big bands, “personalities,” “easy, light and Latin,” soundtracks, and classical titles, per its website.  A new batch of rare and new-to-CD titles (including “easy listening” releases from Peter Nero, Floyd Cramer, Paul Mauriat and George Melachrino) is highlighted by a two-fer containing two rare Henry Mancini LPs, and another two-fer drawn from Anthony Newley’s tenure at RCA Victor in which the consummate entertainer was teamed with arrangers like H.B. Barnum, Billy Strange, Peter Knight and future Bread leader David Gates.

Producers David L. Wolper and Stan Margulies’ 1973 documentary Visions of Eight enlisted eight different directors to “capture what the naked eye cannot see” at the August 1972 Summer Olympics held in Munich, West Germany.  Milos Forman, John Schlesinger and Arthur Penn were among the film’s auteurs; each man selected his own crew and a subject on which to focus at the Games.  Forman took “The Decathlon,” Schlesinger covered marathoners in “The Longest,” and Penn filmed “The Highest” about pole vaulters.   French director Claude Lelouch’s The Losers depicted the pain of those athletes who didn’t take a medal home.  Mai Zetterling’s “The Strongest” focused on weightlifters, and Kon Ichikawa’s “The Fastest” concentrated on the men’s 100-meter dash, and so on. Hardly any of the films referred to the athletes by name, instead focusing on an artful, stylish interpretation of their accomplishments.

Tragically, the Games themselves were overshadowed by the Black September terrorist attacks (or the Munich massacre, as depicted in Steven Spielberg’s film Munich) on the Israeli Olympic team which left eleven Israeli athletes and coaches as well as a West German policeman dead.  Critics at the time of Visions’ release took note that only Schlesinger fully addressed the attacks in his film The Longest; most of the directors reportedly had concluded their location shooting by the time of the September 5 attack.  The Golden Globe-winning Visions was dedicated to “The Eleven Slain Israeli Athletes, Tragic Victims of the Violence of Our Times.”

The versatile Henry Mancini was called on to score Visions of Eight, unifying many of the sequences with his dramatic musical cues.  RCA Victor, the label to which Mancini was signed, issued a relatively brief soundtrack album, including one composition recorded especially for the LP, “Ludmilla’s Theme.”  Vocalion’s reissue marks its first appearance on CD since a 1999 BMG Spain edition which is long out-of-print.  Visions of Eight has been paired with a more unusual project of the great composer’s.   Just You and Me Together Love, recorded in San Francisco in 1977, teamed Mancini with the poet John Laws.  Once described as “Australia’s best-selling poet of the 1970s,” Laws might be described as the Rod McKuen of the Aussie set.  And Just You and Me Together Love could then be thought of as Laws and Mancini’s answer to McKuen and the Anita Kerr Singers’ The Sea.  In any event, Laws narrated, and Mancini provided a typically lush array of original melodies and arrangements to accompany Laws’ recited poems.  Vocalion’s reissue is the first CD appearance of this rare LP, making it essential for Mancini collectors.

After the jump: Vocalion offers a two-for-one release from Anthony Newley! 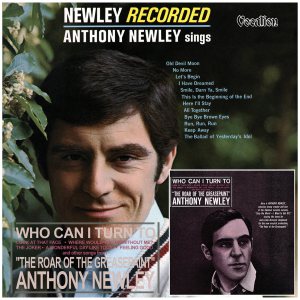 With this new combined reissue of Newley Recorded (1965) and Who Can I Turn To (1967), all of Newley’s Decca/London and RCA solo LPs have finally reached CD save 1967’s enjoyable Anthony Newley Sings Songs from Doctor Dolittle.  (Vocalion previously delivered In My Solitude and Love is a Now and Then Thing on one CD, and Tony and Newley Delivered on another.  The label also collected a number of Decca Rarities from 1959-1964 as Basin Street Blues.)  The renowned British entertainer began his career as a child star, appearing as the Artful Dodger in David Lean’s 1948 film version of Oliver Twist.  He continued to perform on screen, on stage (including the 1956 Cranks, on Broadway) and on radio in the 1950s, and in 1959, latched onto the nascent rock and roll trend sweeping the U.K. with a series of successful pop singles.  But by 1963, he had bucked rock and roll to team with Leslie Bricusse to write the musical Stop the World – I Want to Get Off.  Never content to concentrate on just one area of his talent, Newley also directed the show, and starred in it in both London and New York.  Newley and Bricusse picked up a Grammy Award for “What Kind of Fool Am I?” and reteamed for various projects including 1965’s The Roar of the Greasepaint – The Smell of the Crowd (which introduced “Who Can I Turn To”), the title song to Goldfinger, and the score to Willy Wonka and the Chocolate Factory.  Along the way, he also provided a significant influence to the young David Bowie, who emulated Newley’s recognizably mannered style early in his own career.

Though sequenced second on Vocalion’s CD, Who Can I Turn To arrived first from RCA, in 1965.  The album featured Newley singing “pop” versions of twelve of his new songs co-written with Bricusse for that year’s Roar of the Greasepaint.  The musical’s original cast recording, with orchestrations by Philip J. Lang, also was an RCA release.   But on Who Can I Turn To, Newley handled all vocals himself, with solo renditions of songs performed onstage by his co-stars including Cyril Ritchard and Gilbert Price.  Though the musical lasted just 231 performances and closed by the time 1965 was out, the score has lived on thanks to strong material like “A Wonderful Day Like Today,” “The Joker,” and especially the all-time standards “Who Can I Turn To” and “Feeling Good.”  Newley Recorded followed on RCA a couple of years later, with swinging, brassy and very sixties arrangements of Broadway classics from Burton Lane and E.Y. “Yip” Harburg (“Old Devil Moon”), Alan Jay Lerner and Kurt Weill (“Here I’ll Stay”) and Rodgers and Hammerstein (“I Have Dreamed”) along with a more recent tune from Charles Strouse and Lee Adams’ Golden Boy (“No More”) and others.  Newley recorded the LP in Hollywood with an A-list of arrangers including Billy Strange, H.B. Barnum and David Gates.  Vocalion’s reissue, licensed from Sony in the U.K., has been remastered by Michael J. Dutton, but no new liner notes are included.  The original notes from both titles, however, have been reprinted.

The Mancini and Newley titles are joined by numerous other “easy listening” reissues including Floyd Cramer’s Here’s What’s Happening/Plays MacArthur Park (with such groovy selections as “Good Vibrations,” “Cherish,” “Winchester Cathedral” and a handful of Burt Bacharach/Hal David songs), Al Hirt’s Plays Bert Kaempfert/Latin in the Horn (the latter arranged by Lalo Schifrin) and The Melachrino Strings and Orchestra’s Something to Remember Me By/The New Sound of Broadway.  The former album is a salute to Arthur Schwartz and Howard Dietz; the latter to Jerry Herman.  All of these titles can be ordered at the links below!

* Recorded specifically for the album