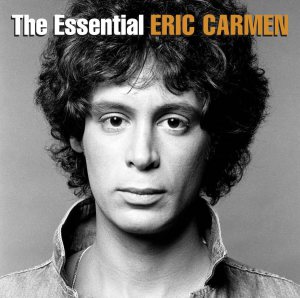 Will the real Eric Carmen please stand up?  There's Eric Carmen, the power pop prince of The Raspberries.  There's Eric Carmen, the classically-inspired balladeer of "All By Myself" and "Never Gonna Fall in Love Again."  And there's Eric Carmen, the eighties "comeback kid" of "Make Me Lose Control" and the Dirty Dancing perennial "Hungry Eyes."  Luckily, all sides of the versatile artist figure prominently on Arista Records and Legacy Recordings' upcoming release of The Essential Eric Carmen.  This 2-CD, 30-song anthology, due on March 25, encompasses every aspect of Carmen's career, and includes two previously unissued live recordings, one new-to-CD track, and one newly-recorded song.

Ohio-born Carmen made his major-label debut as a member of Cyrus Erie, signed to Epic Records for a handful of singles including "Get the Message" which makes its CD-era debut here.  When Cyrus collapsed, Carmen and guitarist Wally Bryson joined with Bryson's old bandmates Jim Bonfanti and Dave Smalley of The Choir to form The Raspberries.  And this time, Carmen had the formula to "go all the way."    The Raspberries led the power-pop pack in synthesizing the tight melodies, layered harmony vocals, indelible riffs and polished production of the likes of The Beatles, The Hollies and The Beach Boys into a sound that was perfect for its own time period.  The band broke up in 1975, but had already left a lasting legacy with the crackling likes of "Go All the Way," "Overnight Sensation (Hit Record)" and "Let's Pretend," all of which are included on The Essential Eric Carmen.

The Raspberries frontman's eponymous 1975 debut for Arista Records got his solo career off to an auspicious start.  The No. 21-charting LP yielded two hit singles, both of which spoke to Carmen's musical acumen as they were inspired by themes from classical composer Sergei Rachmaninoff (1873-1943).  Sans his Raspberries comrades, Carmen might have felt "All By Myself," but the song of the same title soared to No. 2 on the Billboard chart and No. 1 on Cash Box.  Its follow-up, "Never Gonna Fall in Love Again," peaked at No. 11 on the Billboard Hot 100 and topped the Easy Listening chart.  In what must have been an ultimate compliment, Frank Sinatra performed both songs in concert.

Carmen's sophomore effort Boats Against the Current continued his winning streak, as both the title track and "She Did It" hit the charts.  "Love is All That Matters" drew on a Tchaikovsky theme; all three songs plus the album's third single "Marathon Man" are among its tracks included on the new compilation.  Carmen remained at Arista for two more albums, Change of Heart and Tonight You're Mine, before jumping ship to Geffen for another self-titled album co-produced by The Four Seasons' Bob Gaudio.  All three albums are represented on The Essential, as are the songs which defined Carmen for a new generation: the Dirty Dancing anthem "Hungry Eyes" (1987) and the nostalgic single "Make Me Lose Control" (1988).

In addition to all of those hits and key album cuts, The Essential Eric Carmen also premieres two never-before-heard performances from New York City's late, lamented Bottom Line circa 1976, "That's Rock and Roll" and "Starting Over."  It takes in a track from the much-hailed live Raspberries reunion of 2005, "Ecstasy," and ends on an optimistic note with "Brand New Year," newly-recorded by Carmen with Jeffrey Foskett, Darian Sahanaja, Nick Walusko and Mike D'Amico of Brian Wilson's band.  (The latter three men, of course, also are founding members of The Wondermints.)  Though "Brand New Year" has been available online since Christmas Eve 2013 (and can be streamed here), The Essential Eric Carmen marks its CD debut.  The ballad is vintage Carmen - lush, gorgeous  and memorably melodic.

Carmen himself contributes new liner notes for the anthology produced by Timothy J. Smith and remastered by Mark Wilder.  Carmen is particularly proud of how the set showcases his many musical styles, writing on his website that "A certain 'iconic' record executive once told me 'Once you go 'pop', you can never go back.' I beg to differ, and this record will prove just how wrong he was, once and for all."  The Essential Eric Carmen - with its blend of pop, rock and pure heart - will be available from Arista Records and Legacy Recordings on March 25, and you can pre-order below!