Somewhere Out There: Linda Ronstadt's Greatest "Duets" Arrive On CD in April 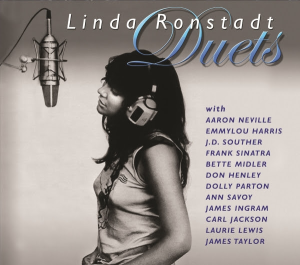 On April 10, Linda Ronstadt joins the class of the Rock and Roll Hall of Fame – an honor that was certainly not needed to acknowledge Ronstadt’s place as among the top vocalists of her generation, but a welcome and long-overdue honor nonetheless.  Two days earlier, Rhino celebrates the career of the versatile artist with the release of Linda Ronstadt – Duets.  Its fifteen tracks encompass performances alongside artists including Aaron Neville, Emmylou Harris, Don Henley, Frank Sinatra, James Taylor, Dolly Parton, James Ingram and others, including one previously unreleased recording with bluegrass musician Laurie Lewis.

Curated with the cooperation of Ronstadt and her longtime manager, John Boylan, Duets touches on the varied sides of Ronstadt the artist.  Since her earliest days as a member of The Stone Poneys, she’s refused to allow herself to be pigeonholed in one genre.  That inclination towards musical exploration has led her to treat the works of Gilbert and Sullivan, Rodgers and Hart, Warren Zevon, Lowell George, and Jackson Browne with the same kind of respect and innate understanding.  The Rock Hall induction comes on the heels of the publication of Ronstadt’s memoir Simple Dreams and her sad announcement that Parkinson’s disease has left her unable to sing.  Ronstadt has never completely fit in with the rock clique, despite having placed 38 singles on the Billboard Hot 100 (including ten that went Top Ten) and 36 entries on the album chart, including ten that reached the Top Ten there too, and three that hit the top spot!

Duets draws on a variety of sources spanning 1974 to 2006.  A number of tracks show Ronstadt’s love of country music, including duets with her Trio partners Dolly Parton (1977’s “I Never Will Marry”) and Emmylou Harris (1974’s Grammy-winning “I Can’t Help It (If I’m Still in Love with You)”).  Other tracks draw on the group of Southern California/Laurel Canyon rockers in which Ronstadt flourished commercially and artistically; Eagles’ Don Henley joins Ronstadt on the harmonies of Warren Zevon’s “Hasten Down the Wind,” and J.D. Souther sings on his own “Prisoner in Disguise.”  James Taylor, who shared a producer with Ronstadt in Peter Asher and recorded many of his best works with that SoCal flavor, duets on a revival of the Ike and Tina Turner staple “I Think It’s Gonna Work Out Fine.”  Ronstadt, whose three collaborations with Nelson Riddle remain among the finest expressions of her art, is heard on a couple of Great American Songbook standards via “Moonlight in Vermont” with Frank Sinatra from Old Blue Eyes’ Duets II project, and Irving Berlin’s “Sisters” with Bette Midler from Midler’s 2003 Rosemary Clooney tribute album produced by Barry Manilow.

Among the most successful tracks here are the Grammy-winning “Somewhere Out There” written by Barry Mann, Cynthia Weil and James Horner for Don Bluth’s 1986 animated film An American Tail, on which Ronstadt duets with James Ingram, and two tracks with New Orleans’ legendary Aaron Neville from their joint album Cry Like a Rainstorm, Howl Like the Wind.  “Don’t Know Much” reunited Ronstadt with Mann and Weil, this time writing with Tom Snow.  The song had been performed previously by Mann, Bill Medley, Bette Midler, Glenn Jones and even Dallas actress Audrey Landers, but Ronstadt and Neville took it all the way to No. 2 Pop/No. 1 AC in 1989, also picking up a Grammy for their trouble.  “All My Life,” written by Karla Bonoff, won yet another Grammy, and though it barely missed the Pop Top 10 at No. 11, it also topped the AC chart.  Ronstadt had been an early champion of Bonoff’s songs, recording three of them on 1976’s Hasten Down the Wind.  The three most recent tracks on Duets hail from what will likely remain Ronstadt’s final studio album, Adieu False Heart with Cajun music singer Ann Savoy, including a cover of the Left Banke’s 1966 hit “Walk Away Renée.”

After the jump: more on Duets, including the complete track listing and pre-order links!

This new collection is in stores on April 8 from Rhino, two days before Linda Ronstadt’s induction into the Rock and Roll Hall of Fame.  You can order it below!