Keeping Score with New Releases by Intrada and Kritzerland 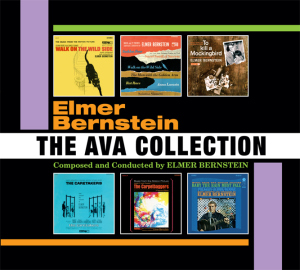 The last few weeks have seen some great catalogue soundtracks released, including a set of LPs from a beloved Golden Age composer and a pair of heavy hitters at 20th Century-Fox.

Last week saw Intrada release two score titles. The first is the world premiere of Maurice Jarre's score to Distant Thunder, from the 1988 John Lithgow-Ralph Macchio film about a Vietnam War veteran uneasily returning to his family after a decade spent in the American wilderness. Jarre's small-scale electronic ensemble balances the tentativeness of Lithgow and Macchio's burgeoning father-son relationship with sudden bursts representing the fear and violence that Lithgow's Mark Lambert so often lived with.

Elsewhere, Intrada unleashes no less than six albums on three discs from acclaimed composer Elmer Bernstein's tenure on the MGM-distributed label Ava Records. Recorded and released between 1962 and 1965, The Ava Collection features original soundtrack albums from such classics as The Carpetbaggers, To Kill a Mockingbird and Walk on the Wild Side, as well as a compilation of stray movie and television themes by Bernstein. Not only is this the first collection of all six of these releases, it's also the first time all six of them have been mastered from the original first generation stereo masters! This mix of quality and quantity make it a must-have for not only Bernstein fans, but for fans of great '60s film scoring.

Last, but certainly not least, Kritzerland uncovers two classics from the scoring sessions of 20th Century-Fox: Alfred Newman's O. Henry's Full House (1952) and Cyril Holdridge's The Luck of the Irish (1948). Full House is quite an interesting picture: five adaptations of short stories by the popular American author, including "The Last Leaf," "The Ransom of Red Chief" and the enduring "The Gift of the Magi" - all put on by five different directors and five different casts (including Charles Laughton, Marilyn Monroe, Farley Granger and others) and narrated by John Steinbeck, in a rare film appearance. Newman's five mini-scores, ably arranged by Ken Darby, are treats for any fan of his work. Full House is paired with the score to The Luck of the Irish, a fantasy about a man (Tyrone Power) torn between his wealthy fiancé in New York and a beautiful stranger he met on the Emerald Isle. His journey is guided by Cecil Kellaway as Horace, an honest-to-goodness leprechaun he also makes the acquaintance of.

The Kritzerland two-fer is limited to 1,000 copies, while the Intrada sets are available "while quantities and interest remain." Make your orders and check out the track lists after the jump!

Disc 1: Walk on the Wild Side and The Carpetbaggers

Disc 2: The Caretakers and Baby the Rain Must Fall

Disc 3: To Kill a Mockingbird and Movie and TV Themes Composed and Conducted by Elmer Bernstein