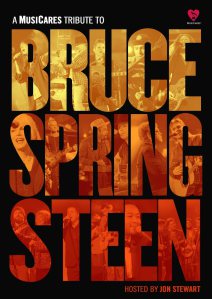 When Bruce Springsteen’s High Hopes debuted at No. 1 on the Billboard 200 this January, the iconic artist earned his eleventh chart-topping album.    That was enough to make him the No. 3 all-time champ in that department, just behind The Beatles (19) and Jay-Z (13).  The eclectic recordings used to assemble High Hopes divided many of Springsteen’s devotees, as did the contributions of Rage Against the Machine’s Tom Morello.  But par for the course with any Bruce-related release, the songs heard on High Hopes were culled from a larger group, leaving outtakes behind.  On April 19’s Record Store Day, you’ll have the chance to hear some of those tracks on a new four-song, 12-inch vinyl EP entitled American Beauty.  And that’s not all coming from the prolific singer-songwriter-bandleader.   A little less than a month earlier, on March 25, Columbia Records will release A MusiCares Tribute to Bruce Springsteen on Blu-ray, DVD and digital download, on which many of The Boss’ fans and contemporaries salute him in song for his philanthropy.

American Beauty premieres three songs from the same sessions that yielded much of the material on High Hopes.  “Mary, Mary,” “Hey Blue Eyes” and “American Beauty” all feature Morello’s blistering guitar.  Details have not been provided regarding the fourth track, “Hurry up Sundown,” though speculation has already run rampant among Springsteen fans.  The Guardian speculates that “Sundown” may be the same song recorded by the garage rockers Balloon Farm in 1967.  The Laurie Records single was co-written by the band’s Mike Appel…the same Mike Appel who famously managed Springsteen and produced his first albums.  As High Hopes featured a number of diverse covers, it’s certainly not out of the realm of possibility that another cover version would feature on the Record Store Day EP.

After the jump, we’ll take a look at A MusiCares Tribute to Bruce Springsteen!

In the spirit of past MusiCares events honoring such luminaries as Brian Wilson, James Taylor, Neil Young and Barbra Streisand, the Springsteen gala features a diverse cross-section of artists paying tribute to the singer and his songs.  In addition to five performances by Springsteen and The E Street Band, the release features sixteen more performances by veteran artists including Patti Smith (reprising, what else, “Because the Night”), Elton John (“Streets of Philadelphia”), Neil Young and Crazy Horse (“Born in the U.S.A.”), Sting (“Lonesome Day”), Emmylou Harris (“My Hometown”), and Jackson Browne, joined by Morello (“American Skin (41 Shots)).”  Younger artists from a variety of genres are also represented, such as John Legend (“Dancing in the Dark”), Mumford and Sons (“I’m on Fire”), and Alabama Shakes (“Adam Raised a Cain”).  There are the obligatory all-star team-ups, too, like Jim James and Morello (“The Ghost of Tom Joad,” on which Morello also accompanies Springsteen on High Hopes), Tim McGraw and Faith Hill (“Tougher Than the Rest”), Mavis Staples and Zac Brown (“My City of Ruins”) and Natalie Maines, Ben Harper and Charlie Musselwhite’s “Atlantic City.”  Jon Stewart hosts the evening.

A MusiCares Tribute to Bruce Springsteen arrives on DVD, BD and DD from Columbia Records on March 25, while American Beauty follows at finer independent record shops everywhere on Saturday, April 19.  You’ll find pre-order links to the MusiCares concert just below!