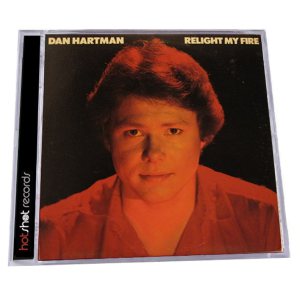 Talk about fusion!  For “Hands Down,” the opening cut of his 1979 album Relight My Fire, Dan Hartman enlisted rock and roll great Edgar Winter to weave his alto saxophone licks throughout the Latin-flavored disco track, and Stevie Wonder to provide his instantly recognizable harmonica.  Hartman wasn’t just a dilettante, but a regular musical renaissance man.   A veteran of the Johnny Winter Band and the Edgar Winter Group, he wrote the latter’s smash hit “Free Ride,” and successfully completed the transition to solo stardom with 1978’s “Instant Replay,” a No. 1 Disco hit that also reached the Pop Top 30.  In the eighties, he revitalized James Brown’s career with “Living in America” and gave blue-eyed soul a contemporary makeover with “I Can Dream About You.”  The title song of “Relight My Fire,” on which Hartman was joined by Salsoul queen Loleatta Holloway, proved that he could capture the disco magic twice, as the song remained atop the Billboard dance chart for six weeks.  In 1993, it became a hit all over again for Take That and Lulu.  Now, thanks to Hot Shot Records, Hartman’s Fire has once again been relit.

Over just six tracks – all written by Hartman, who also played keyboards, guitar, bass, drums and percussion on the album – Relight My Fire pulsates with the energy of the era as filtered through Hartman’s pop sensibility.  It was a catholic sensibility that made the musician and songwriter adaptable to pop, rock and soul settings.  For the album centerpiece “Vertigo/Relight My Fire,” Hartman traveled to Philadelphia’s Sigma Sound Studios and enlisted veteran Norman Harris (Blue Magic, The O’Jays) to arrange and conduct.  Harris brought his sublime orchestrated style to the introductory “Vertigo” as well as to the main body of the sizzling, catchy “Relight My Fire,” with a typically passionate duet vocal from Loleatta Holloway.  (Harris had also frequently produced Holloway at Salsoul.)  Whether in the original, nearly 10-minute album version of “Vertigo/Relight My Fire” or the 3+-minute single edit of “Relight” (among the six bonus tracks on Hot Shot’s reissue), Hartman and Holloway’s musical invitation can’t be denied.

“Just for Fun” (“Just do what makes you feel all right…If you’re hungry for some good times now, don’t be late, let me show you how!”) is lyrically in the good-time, hedonistic vein expected of a disco record, and the singer’s enthusiasm is infectious, as is his boogie piano solo.  (The piano has a bit of the flavor of another disco anthem, Peter Allen’s “I Go to Rio.”)  The same goes for the bubbly “I Love Makin’ Music,” which flows out of “Just for Fun” and epitomizes what could have been Hartman’s personal credo throughout his all-too-short 43 years.  “Love makin’ music, love makin’ love,” the female background vocalist coo during the track, but on Relight My Fire, the two acts seem synonymous.  Hartman’s disco remake of his own “Free Ride” is surprisingly effective.  If it doesn’t replace the original, it succeeds on the strength of the song’s abundant melody, signature riff and energetic performance here.

After the jump, we have more on Relight My Fire, plus a look at Hot Shot’s rediscovery of actress-singer Sheryl Lee Ralph’s foray into contemporary R&B!

Reissue producer Michel Bednarek has added six bonus tracks.  In addition to the previously mentioned single edit of “Relight My Fire,” you’ll hear two distinct 12-inch remixes of “Hands Down,” the 12-inch mix of “Vertigo/Relight,” a 12-inch mix of “Vertigo” alone and one of “Relight” alone.  All of these mixes, as well as those on the album, are the work of John Luongo.  Big Break’s Wayne Dickson has remastered all of the tracks here, and Stephen “SPAZ” Schnee supplies succinct, new liner notes.  Dickson has also conducted an entertaining and heartfelt interview with Luongo about his time working with the late Hartman and his own distinguished career.

After making her Broadway debut in the short-lived musical Reggae in early 1980, Sheryl Lee Ralph didn’t have to wait long for her dreams to come true.  Director-choreographer Michael Bennett (A Chorus Line, Follies) sensed that Ralph had just the right star quality to portray Deena Jones, the Diana Ross-esque lead singer of The Dreams, in his new musical Dreamgirls.  Ralph brought so much star wattage to her role that she could likely have powered the giant moving towers that defined Bennett’s groundbreaking staging.  And that she held her own with Jennifer Holliday and her thunderous rendition of Henry Krieger and Tom Eyen’s “And I Am Telling You I’m Not Going” was no small accomplishment.  So it wasn’t a shock that the record business beckoned to the lithe, glamorous Tony nominee.  Ralph’s only solo album, 1984’s In the Evening, has just been reissued by Hot Shot in another remastered and generously expanded edition.

Producer and multi-instrumentalist Trevor Lawrence was just coming off his stratospheric success as arranger, co-writer and co-produced of The Pointer Sisters’ “I’m So Excited” when he was paired with Ralph for her New York Music Company debut.  As producer of the entire LP and co-writer of four tracks (“You’re So Romantic,” “In the Evening,” “Evolution” and “Be Somebody”), he brought the same sensibility to Ralph’s music as he had The Pointers’.  The album was filled with sleek, gleaming synthesizer parts, danceable beats and taut guitar licks, all built around Ralph’s expressive, theatre-trained voice which could be powerful or intimate.

Within that framework, however, Lawrence embraced a variety of textures to bring an individual stamp to each track.  The brassy horns of the opening song “You’re So Romantic” add a note of jazz, with Ralph using her skill as an actress to believably address her “daddy” who’s “so romantic.”  In the Evening was recorded in New York, and Lawrence, Musker and Ralph illustrated the seductive vibe of the city’s nightlife on the title cut.  “In the evening, the real me comes alive/In the evening, something happens that I can’t describe,” she sang during one of New York City’s darker periods with just the right notes of urgency and escapism.

“Give Me Love,” from the pre-fame Michael Bolton and Patrick Henderson, is also performed with cool, urbane sophistication by Ralph.  Though they’re pure pop songs in an R&B setting, it’s still easy to imagine “Give Me Love” or Alvin Fields’ “Back to Being in Love” as parts of a concept album of life and love in New York City.  Her typically-smooth vocals are more stylized on Lawrence and Musker’s “Evolution,” which emulates the breakneck pulse of Michael Sembello’s hit “Maniac,” and on “Be Somebody,” in which she fiercely protests “I need to be somebody, too” to a clearly inattentive lover.  The metallic sheen of Lawrence’s dramatic production here is complemented by a light reggae-influenced beat.

Ralph is sensual and breathy on a modernized cover of Carla Thomas’ Stax hit “B.A.B.Y.,” and if the cutting-edge circa 1984 production dates it now more than Thomas’ 1966 original, it’s a clever change of pace on the album.  So is the silky “I’m So Glad We Met,” the lone ballad and closing song.  Co-written by Ralph herself, it’s in a more melodic, “traditional” vein that should please fans of Dreamgirls’ style.  (If only Henry Krieger and Tom Eyen had been tapped to pen a track for Ralph’s solo debut!)

Five bonus tracks round out this deluxe package: two remixes and an instrumental of “In the Evening” and two remixes of “You’re So Romantic.” Wayne A. Dickson and Malcolm McKenzie have produced with Hot Shot/Big Break’s customary attention to detail; Dickson and Nick Robbins have remastered.  Christian John Wikane’s comprehensive liner notes pay welcome attention to Trevor Lawrence’s role as producer, and draw upon a new interview with Lawrence.

Both Dan Hartman’s Relight My Fire and Sheryl Lee Ralph’s In the Evening are available now and can be ordered below!