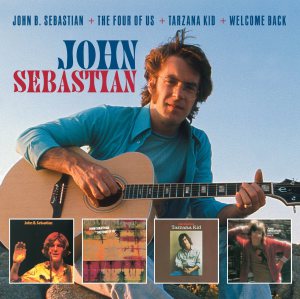 Edsel is saying “welcome back” to John Sebastian with the recent release of a quartet of albums in one deluxe package: John B. Sebastian, The Four of Us, Tarzana Kid and Welcome Back.  Edsel has bundled these releases, representing the Lovin’ Spoonful founder’s complete Reprise studio recordings, with a live concert DVD making its very first appearance anywhere.  In Concert: John Sebastian Sings John Sebastian was broadcast by the BBC in October 1970, months following the release of John B. Sebastian.

New York native Sebastian fused pop and folk when he joined with Zal Yanovsky, Steve Boone and Joe Butler as The Lovin’ Spoonful, and as their chief songwriter penned the era-defining hits still in rotation on oldies radio today: “Do You Believe in Magic,” “Daydream,” “Did You Ever Have to Make Up Your Mind,” “You Didn’t Have to Be So Nice” (with Boone), “Summer in the City” (with brother Mark Sebastian and Boone).  A solo career might have seemed inevitable, and indeed, in 1968, Sebastian left the group.  He didn’t remain idle for long, though.  He wrote songs for Murray Schisgal’s Broadway play Jimmy Shine starring Dustin Hoffman and Rue McClanahan, and in 1969, his impromptu solo set at Woodstock became a festival highlight.  But few at Woodstock knew that Sebastian’s first solo album was already completed and awaiting release.

A contractual snafu led MGM Records to claim ownership of the album, and in fact MGM released a version of the John B. Sebastian album in 1970.  Reprise, to whom Sebastian felt he was rightfully signed, was forced to sue MGM.  When the smoke cleared, the Reprise edition of John B. Sebastian prevailed, eventually becoming Sebastian’s best-selling solo record.  On the album, Sebastian revisited his first solo single “She’s a Lady” as well as The Spoonful’s “You’re a Big Boy Now,” and welcomed a variety of guests including all three members of Crosby, Stills and Nash as well as CSN drummer Dallas Taylor, Buzzy Linhart on vibes and The Ikettes on backing vocals.

Another studio recording arrived in 1971, The Four of Us.  It was a concept album chronicling Sebastian’s meeting with, courtship of, and marriage to his wife Catherine, culminating in the 16-minute epic title track.  Produced like its predecessor by Paul A. Rothchild of Doors fame, Sebastian enlisted Dallas Taylor, Mountain’s Felix Pappalardi, CSNY bassist Greg Reeves, The Turtles’ Johnny Barbata and the Esso Trinidad Steel Band to play on The Four of Us.  In addition to his new songs, the album featured a traditional tune (“Well, Well, Well”) arranged by Josh White and a cover of Clifton Chernier’s “Black Snake Blues.”

Following a hiatus to raise a family, Sebastian returned to Reprise with 1974’s Tarzana Kid.  The LP also reunited him with Lovin’ Spoonful producer Erik Jacobsen.  Jacobsen and Sebastian co-produced this set featuring contributions from Toto’s David Paich, Little Feat’s Lowell George, Ry Cooder, Buddy Emmons, Emmylou Harris, David Lindley, The Pointer Sisters and even Phil Everly.  On Tarzana Kid, Jacobsen and Sebastian revisited The Spoonful’s “Sportin’ Life” and “Wild About My Lovin’,” both of which had appeared on the Spoonful’s first long-player, as well as Little Feat’s “Dixie Chicken.”  Alas, Tarzana failed to chart, and Sebastian found himself at odds with Reprise.  That would soon change.

You know what to do…hit the jump for more!

After a television bigwig reportedly was seeking a “John Sebastian” type to pen the theme song to Kotter, a proposed television sitcom to star Gabe Kaplan and the up-and-coming John Travolta.  Sebastian met with that producer, Alan Sachs, and the two men hit it off.  Soon, he had written “Welcome Back,” and the show was retitled Welcome Back, Kotter.  Sebastian’s TV theme topped the Billboard chart in 1976, was very nearly that year’s most successful single (“but just to keep me humble, the song of the year…was ‘Disco Duck’ by Rick Dees,” Sebastian has dryly noted) and spawned an album of the same name co-produced by Sebastian and hitmaker Steve Barri (The Grass Roots).    The Welcome Back LP, with another Spoonful revival (“Didn’t Wanna Have to Do It”) and contributions from drummer Jeff Porcaro and keyboardist Michael Omartian, rounds out the audio portion of the Edsel set along with Sebastian’s non-LP single “Give Us a Break” b/w “Music for People Who Don’t Speak English.”

The highlight of this 2-CD/1-DVD package is the first-ever commercial release of Sebastian’s 1970 BBC concert in which he performs a number of Lovin’ Spoonful favorites such as “Rain on the Roof,” “Daydream,” “Jug Band Music,” “Nashville Cats” and “Darling Be Home Soon.”  The 10-song concert, originally aired as part of BBC 4’s Singer-Songwriters at the BBC series, is being released here in its entirety for the first time since its original broadcast nearly 45 years ago.

This Edsel collection, housed in a digipak, offers an alternative to Wounded Bird’s recent, bare-bones reissue of Rhino Handmade’s Faithful Virtue: The Reprise Recordings.  That original 2001 release included all four studio albums, the Reprise live album Cheapo Cheapo Productions Presents Real Live, and five live bonus tracks from Woodstock.  The Wounded Bird reissue dropped the Woodstock bonuses as well as the lavish packaging (including a 48-page booklet with notes by Sebastian).  Edsel’s new release doesn’t include Cheapo Cheapo or the Woodstock tracks, but offers prime live Sebastian on DVD in its place.  In addition, this set features new remastering by Peter Rynston and a 36-page booklet with liner notes by Paul Myers drawing on a new interview with Sebastian, and complete lyrics.