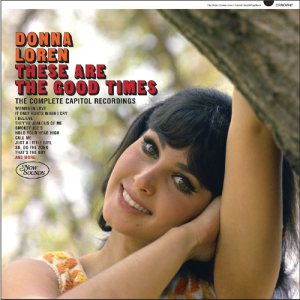 “I’m just a little girl, but I feel a woman’s love for you,” Donna Loren sings on the first track of Now Sounds’ delicious new anthology These Are The Good Times: The Complete Capitol Recordings. Those familiar with the teen starlet’s lone Capitol long-player, Beach Blanket Bingo, might be forgiven for thinking this release would be more of the same sand-and-surf fun. But as Gerry Goffin and Carole King’s “Just a Little Girl” reveals, there’s much more to the music of Donna Loren. The newly discovered tracks on Good Times lyrically hew, in large part, to the teen-pop territory of melancholy and devotion.   But in every respect – not least of all vocally and musically - they’re prime West Coast pop nuggets. Fans of the Los Angeles sound will recognize every name here, all at the top of their game: producers David Axelrod, the outré pop guru, and Steve Douglas, Wrecking Crew saxophonist; arrangers Jack Nitzsche, H.B. Barnum, Gene Page and Billy Strange; musicians Hal Blaine, Carol Kaye, Lyle Ritz, Ray Pohlman, Tommy Tedesco, Larry Knechtel, Don Randi, Plas Johnson, Julius Wechter, and future headliners Glen Campbell and Leon Russell.

Donna Loren turned eighteen in 1965, when two-thirds of this collection’s 29 songs were cut. She first entered Capitol’s Hollywood studios, one year earlier in 1964, as the winsome “Dr. Pepper girl” and a beach party film ingénue. Fresh off a brief stint at Challenge Records, she recorded a handful of singles with David Axelrod and arranger-conductor H.B. Barnum, and all of these 45s are included on the non-chronologically-sequenced Good Times. “Just a Little Girl” was among the first songs Loren recorded at Capitol, yet it stands out as one of the strongest of her tenure with the label. “Ninety Day Guarantee,” another early single, boasts surf guitar and groovy organ. But a handful of songs that were left in the can from 1964 are more exciting than the released tracks from that year. Bob Montgomery’s sassy “Leave Him to Me” shows Donna cutting loose with a convincing growl in her voice. If she’s positively commanding there, the goofy “Drop the Drip” is light, enjoyable teenage fun (“Just because he doesn’t wear tight pants, combs his hair a kooky way/’Cause he doesn’t like the latest dance, they call him Squaresville, USA!”) from one of America’s sweethearts. “Good Things” has a bit more of an R&B feel.

Loren returned to Capitol’s studios in March 1965 to lay down vocals for her Beach Blanket Bingo album on which she sang all of the songs from the American-International picture – including those performed in the film by Annette Funicello, still recording for Disney and unavailable for the soundtrack. The songs by Guy Hemric and Jerry Styner make for a pleasant if lightweight listen. The pair gave Loren one of her performance staples, “It Only Hurts When I Cry” alongside MOR fare like this volume’s title track “These Are the Good Times.” But Beach Blanket isn’t altogether indicative of Loren’s versatility. One non-LP side emerged from the same March 1965 session, a kooky novelty called “So, Do the Zonk.” Alas, the Zonk dance craze never took off!

When she next entered the Tower, Loren was paired with producer Steve Douglas and arranger Jack Nitzsche for the five songs that form the heart of this compilation. Shockingly, only one of these recordings was originally selected for release by Capitol: Tony Hatch’s oft-recorded “Call Me.” Like so many of the songwriter supreme’s other hits, it was written for Petula Clark. But the U.S. hit of the song went to A&M artist Chris Montez in Herb Alpert’s breezy clap-along arrangement. In 1966, Frank Sinatra and his longtime arranger Nelson Riddle transformed it into a slow yet sizzling swing standard for the Chairman’s Strangers in the Night album. Loren’s version predated both of those renditions, and it’s inexplicable that she didn’t chart with it. Nitzsche inventively ladles on the strings, horns and background vocals over Loren’s coquettish lead, which frequently evokes an expressive cross between Jackie DeShannon and Tammy Grimes. “Call Me” was paired on 45 with a boisterous visit to Ashford, Simpson and Armstead’s “Smokey Joe’s,” proving that Loren was as adept with big beat as with big ballads.

Nitzsche scored another Goffin/King tune for Loren, “They’re Jealous of Me,” which was also recorded by Earl-Jean (“I’m Into Something Good”) and Connie Stevens.   It makes its debut here. The full Wall of Sound treatment was naturally applied to Barry Mann, Cynthia Weil and Phil Spector’s “Woman in Love (With You).” The Ronettes’ recording of the song was released in 1975, while The Crystals’ (led by La La Brooks) didn’t receive a commercial release until 2011. This was one unlucky song; Donna’s sublime rendition sat in the vaults until Ace Records unearthed it in 2006 for Hard Workin' Man, its second Nitzsche compendium. Nitzsche also brought baroque flourishes and Spectorian pomp to Mann and Weil’s sublime “That’s the Boy.” It was first released on Ace’s Glitter and Gold anthology of the duo’s work. The anthemic “Hold Your Head High” from the team of Randy Newman and Jackie DeShannon is another stunningly mature, previously unreleased track from the Loren/Nitzsche/Douglas/Wrecking Crew cadre. Donna’s direct, emotional vocal cuts through the martial beat and big production, and delivers a surprising degree of intimacy.

The rare and never-before-heard music doesn’t stop there. The Beau Brummels backed Donna on the folk-rock of Brummel Ron Elliott’s “It’s Gotta Be,” with Glen Campbell also on guitar, from October ’65. And then there’s “You Can’t Lose Something You Never Had.”   This majestically dramatic song from the pre-fame Al Kooper with his then-regular writing partners Bob Brass and Irwin Levine has been described by Kooper as “admittedly Bacharachian” and “still one of my favorites from the old days.” It’s not hard to see why, as his emotional melody soars in unexpected directions. Kooper once stated that he was only aware of the MGM Records original 45 by Bruce Scott and the demo by Jimmy Radcliffe; one hopes he hears Donna’s recording post haste. The production by Douglas and arrangement by Billy Strange is less overtly Bacharach-esque than on the Scott single, with The Wrecking Crew expertly recalling Pet Sounds in its introduction (which it, of course, predated) and Tony Hatch in its brassy elegance. Loren’s vocal is filled with the requisite urgency; these two-and-a-half minutes alone would be reason enough to take a chance on These Are The Good Times. Strange was also the arranger of “My Way,” which isn’t Frank Sinatra’s defiant anthem but rather a pleasant beat tune. Alas, the identity of its writer(s) has been lost to time.

There's more Loren after the jump!

A couple of 1966 single sides concluded Donna’s tenure with Capitol. A three-hanky Vietnam-era ballad from Billy Page entitled “Play Little Music Box Play” offers a lush arrangement from Billy’s brother Gene Page, not to mention a spoken recitation. The contrast between Loren’s girlish speaking voice and huskier, assured singing voice is strikingly evident on “Music Box.” Its flipside was occupied by a revival of the 1953 Ervin Drake (“I’ve Gotta Be Me”) co-write “I Believe.” Jane Froman introduced the inspirational song which gave the title to a Perry Como album that same year. It’s clear why it was paired with the thematically-similar “Play Little Music Box Play” but musically it’s not cut from the same cloth as the other tracks here.

Now Sounds has lavished Loren’s recordings with customarily impressive packaging, design and notes. The anthology’s co-producer and designer Steve Stanley has created the Capitol album that never was – and should have followed Beach Blanket Bingo – with his cover artwork. The attention to period detail (as always) extends to the CD label and the booklet with its numerous, appealing photos of the young Donna. Co-producer Sheryl Farber supplies the comprehensive, detailed and entertaining liner notes featuring new recollections from the artist. The tracks are all presented in original mono, as splendidly remastered from the original tapes by Alan Brownstein.

A must for aficionados of both the girl-group and SoCal pop sound of the sixties, These Are The Good Times will leave you scratching your head as to how these catchy and immaculately-produced songs, which oozed hit potential, didn’t earn Donna Loren a spot at the top of the Billboard charts. But with their release, the good times are finally here.