Resonance Records, known for its deluxe archival packages of recently-discovered recordings from jazz greats including Bill Evans and Wes Montgomery, has a busy 2014 ahead. The label has recently announced plans for two Record Store Day releases with more unheard Montgomery music and one RSD exclusive with never-before-released material from Charles Lloyd.  Then, this fall, the label will premiere a live performance from John Coltrane for the first time on commercially released CD.

Resonance’s Echoes of Indiana Avenue preserved early 1957-1958 recordings from the influential guitarist Wes Montgomery, and as such was the first full collection of unheard Montgomery material in over 25 years. On Record Store Day – Saturday, April 19 – Resonance will issue two rare recordings from even earlier in the late artist’s career, both with the Montgomery-Johnson Quintet (Buddy, Monk and Wes Montgomery plus Alonzo Johnson on saxophone and Robert Johnson on drums).

Wes Montgomery and the Montgomery-Johnson Quintet is a limited edition 10-inch vinyl release produced in cooperation with Sony Music. Culled from a recently-discovered lost recording session for Epic Records, these recordings are amongst the earliest known recordings of Wes Montgomery and his brothers, plus the now-legendary Quincy Jones as a producer. Jones organized the session after knowing the Montgomery brothers through his tenure in the Lionel Hampton Orchestra, and it predates his 1957 debut album This is How I Feel About Jazz which was produced by Creed Taylor. Resonance has designed this release as it might have appeared in 1955 with vintage art, logos, and the classic period Epic label. Liner notes include highlights of an interview of Quincy Jones conducted by Ashley Kahn in 2013. These five songs (“Love for Sale, “Leila,” “Undecided,” “The Blues” and “Far Wes”) will also be featured on the 2-CD or 3-LP Resonance release Wes Montgomery: In The Beginning, due later this year. The RSD 10-inch vinyl collectible is limited to 2,000 copies.

It’s joined on RSD by Wes and the Montgomery-Johnson Quintet’s Live at the Turf Club. Sourced from recordings made by 22-year old Butler College student and devoted Montgomery Brothers fan Philip Kahl, Turf Club also makes its first-ever commercial appearance. Kahl had access to the brothers at this period of time, recording them at three different venues. (All three recordings will appear on In the Beginning.) The six tracks here were captured at Indianapolis’ Turf Club in 1956. On “Going Down To Big Mary’s House,” Debbie Andrews of Duke Ellington’s band drops in to supply guest vocals. Resonance first obtained these recordings in 2011 from Buddy Montgomery’s widow Ann, who also provided never-before-published photos taken at The Turf Club. Resonance tracked down the original quarter-inch tape reels, and Bernie Grundman was enlisted to remaster the music for optimal sound.  The RSD release of Live at the Turf Club is limited to 2,000 copies on “whiskey-colored” translucent 10-inch vinyl. The album features “Wes’s Tune”, “Fascinating Rhythm”, “Six Bridges to Cross”, “Down To Big Mary’s”, “Caravan” and “Django.”

Also on Record Store Day, Resonance unveils Live at Slugs from multi-instrumentalist (and to fans of The Beach Boys, “Feel Flows” flautist) Charles Lloyd.  Recorded at the long-gone Manhattan nightspot Slugs Saloon, Live at Slugs features Lloyd’s 1965 all-star quartet with guitarist Gabor Szabo, bassist Ron Carter and drummer Pete LaRoca.  Resonance describes the release:  “Slugs was a staple of the Manhattan Jazz Scene from 1965 to 1972, and was the intersection of music and counterculture. Live at Slugs was recorded by Swedish visionary Bjorn von Schlebrugge, who accompanied Lloyd to his Manhattan gigs. This release features the earliest recording of the Charles Lloyd classic composition “Dream Weaver,” (which would later be recorded with Keith Jarrett, Cecil McBee, and Jack DeJohnette for Atlantic Records on the album of the same name). The interplay between the musicians is remarkable, especially the musical dialogue between Lloyd and Szabo which goes back to their days together, playing with the late, great, Chico Hamilton. This special limited edition 10-inch record is to commemorate the upcoming Charles Lloyd release Manhattan Stories, out later this year on Resonance Records.”  The RSD-exclusive vinyl pressing at 33-1/3 RPM is limited to 2,000 copies worldwide.

After the jump: what does Resonance have planned from John Coltrane?  Plus: full track listings for all releases! 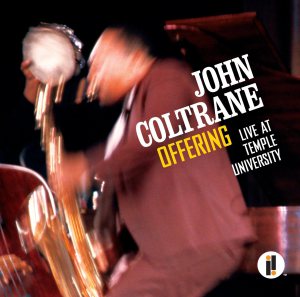 Resonance has teamed with Universal Music’s Impulse! label for the release of John Coltrane‘s Offering: Live At Temple University. Due in both 2-CD and 2-LP formats on September 23, Offering is the first commercial release of Coltrane’s concert of November 11, 1966, at Temple University’s Mitten Hall in his hometown of Philadelphia, Pennsylvania. Nine months later, the tenor saxophonist would be gone, but Offering captures him at the peak of his form.

This is the first official release of an undiscovered, complete Coltrane performance since 2005. With Coltrane on tenor and soprano saxophones as well as flute, it also features his wife Alice Coltrane on piano, Pharoah Sanders on reeds and flute, Rashied Ali on drums and Sonny Johnson on bass.  Steve Knoblauch and Arnold Joyner added additional alto saxophone, and Umar Ali, Algie DeWitt, Robert Kenyatta supplied additional percussion. The set encompasses versions of Coltrane’s 1960 hits “Naima” and “My Favorite Things” (the latter a radically reworked improvisation on the Rodgers and Hammerstein classic), the 1964 ballad “Crescent,” “Leo,” which he had recorded in 1966, and “Offering,” which he would record at a February 15, 1967 studio session.

Offering has been remastered from original master reels made by Temple’s radio station WRTI-FM and discovered by Coltrane expert Yasuhiro Fujioka. The 2-CD digipak edition features new liner notes by Ashley Kahn. The 2-LP set is limited to 4,000 units, and is pressed on 180-gram 12-inch vinyl. Stoughton Press has created a hand-numbered gatefold jacket, and the vinyl package also includes Kahn’s notes as well as postcards with Frank Kofsky’s photographs. Bernie Grundman has remastered. Co-producer/annotator Ashley Kahn writes in his liner notes, “Coltrane was pointing the way forward for generations of players to come, pushing the music to exhilarating, spiritual heights that caught most by surprise. In 1966, that wasn’t what jazz performances were about -not yet.”

Offering: Live At Temple University arrives on September 23 from Resonance Records. We’ll update with pre-order links as soon as they become available!