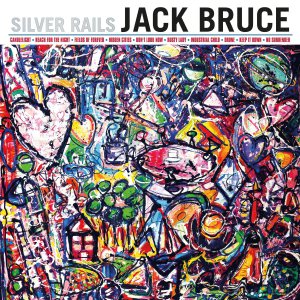 Bruce and producer Rob Cass have enlisted a top-notch crew of musicians for Silver Rails - including Cindy Blackman Santana, Robin Trower, John Medeski, and Phil Manzanera - and have left plenty of room in the arrangements for them to breathe. In this context, Bruce’s bass work isn’t flashy but is always, naturally, an integral part of the instrumentation. But even an A-list group of musicians couldn’t shine without the right material. Thankfully, Silver Rails is a mature, consistent collection of well-crafted songs that don’t wear out their welcome.

It’s difficult not to read into “Fields of Forever” as autobiography: “Wrote myself a sad song a million years ago/It took off down a road I couldn’t predict/With wild licks and crazy kicks...” The swaggering track does recall Cream on one level, but the familiar sound is boldly underlined by the prominent piano and horns. Another treat for fans of Bruce’s old band will be the tight blues-rocker “Keep It Down.” Bernie Marsden’s Clapton-esque guitar licks have a pronounced “Badge” vibe. Again, Medeski is the unsung hero on his Hammond organ; Bruce serves on Mellotron and of course, bass.  “Don’t Look Now” is one of the more beguiling ballads on the set, with Bruce stretching the limits of his vocal range to good effect as the song veers from mellow to dramatic. The multi-instrumentalist accompanies himself on piano for “Industrial Child,” a downbeat and evocative “story ‘bout coal and steel.” On this track, his increasingly fragile yet deftly expressive vibrato is joined only by Tony Remy’s acoustic guitar.

Funk and blues go hand-in-hand on “Rusty Lady.” Seemingly inspired by the death of Margaret Thatcher, it’s a bitingly acerbic song (“She went and missed my G-spot by burning all the goods we’d got” or “It was Winston in drag without the cigar...”) enlivened by the jagged, searing guitar of another classic rock icon, Robin Trower. The songs on Silver Rails might seem unrelated, but hold together well and also hold the listener’s interest. “Rusty Lady,” “Industrial Child” and “Drone,” on what would be Side Two of the vinyl release, form a chilling, dark suite. “Drone” is Bruce’s only solo composition on Silver Rails, and it’s also the most intense. Bruce’s distorted bass and Milos Pal’s drums maintain the disturbing mood, with dive bomber sirens adding to its unsettling soundscape. The album builds, however, to its one full-throttle rocker with the defiant finale of “No Surrender.” Sure, the song’s title is more than a bit cliché, but Bruce and co-writer Brown deliver the goods and don’t pull any punches, either. The song could encapsulate the artist’s worldview: “You cannot be afraid/Of mistakes that you made...Everybody’s running for shelter/You know your destiny/You have to make the parade/No surrender!”