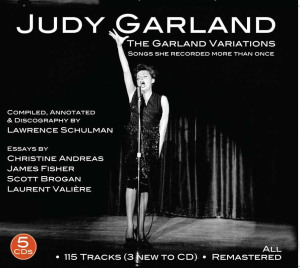 Like so many of the great vocalists of her day, Judy Garland frequently revisited repertoire over the years. An arrangement might vary, in great or small ways, and so, of course, would the interpretation. Garland’s unparalleled interpretive gifts, apt for wringing as much authentic emotion out of a song as possible, are front and center on the latest box set of the late artist’s recordings from JSP Records. The Garland Variations – Songs She Recorded More Than Once is a new 5-CD collection, set for arrival on October 27.  Produced by JSP founder John Stedman and compiled by Lawrence Schulman, the same team behind such past Garland treasure troves as Creations: Songs She Introduced and Smilin’ Through: The Singles Collection 1936-1947, the new box will gather songs Garland recorded in the studio on multiple occasions between 1937 and 1962. With 115 tracks and over 6-1/2 hours of music, it will place the spotlight on the songs Garland re-recorded over a 25-year period. These tracks include such signature songs as “The Man That Got Away,” “Have Yourself a Merry Little Christmas,” and of course, “Over the Rainbow,” which is included in five distinct renditions.  Of course, some of the most renowned composers and lyricists in American popular song are represented, such as Harold Arlen, E.Y. "Yip" Harburg, George Gershwin, Ira Gershwin, Richard Rodgers, Oscar Hammerstein II, Hugh Martin, Ralph Blane, Johnny Mercer, and Harry Warren.

Garland’s first long-lasting recording affiliation was with Decca Records. Following some abortive test records made in 1935 by the twelve-year old singer (released by JSP on the stellar Lost Tracks set), Decca released two sides by Garland in 1936 and signed MGM’s up-and-coming star the following year. Garland remained at Decca through 1947, and her tenure there yielded 90 recordings from 30 sessions between 1936 and 1947. Her departure from Decca coincided with MGM’s entering the young soundtrack LP market, and so she no longer had the need to re-record movie favorites for Decca. With MGM having first right of refusal for her work, she didn’t make any further studio recordings until after her departure from the Hollywood giant in 1950.

In 1953, Garland appeared on the Columbia label with four single sides, and the following year the label released the landmark soundtrack to her film A Star is Born. In 1955, she was back in Hollywood signing with Capitol Records. She remained at the Capitol Tower until 1966, recording a series of stellar studio albums with top-tier arrangers including Nelson Riddle and Gordon Jenkins – not to mention the Grammy Award-winning, record-breaking Judy at Carnegie Hall. JSP’s set concludes in 1962, the year of her final studio LP released in her lifetime, The Garland Touch. (The record was actually a compilation, drawing on Capitol outtakes, a recent single, and tracks from her 1960 London recording sessions which weren’t released in full until the compact disc era.)

At Judy Garland News, compiler Schulman eloquently illuminates the raison d'être behind this fascinating compilation: "The set’s target demographic is not so much Garland collectors who have all of her recordings, but rather the general public who would be interested in hearing Judy’s evolution musically speaking. To take but one example, her 1945 'You’ll Never Walk Alone' and her 1960 interpretation of the same song, heard back to back, offer a unique glimpse of how her artistry evolved. Her two versions of 'By Myself,' the first done at Capitol in 1957, the second in 1962 for I Could Go On Singing, heard back to back is a magnificent revelation in orchestrations and singing style. The difference between her MGM and Decca recordings of the same song is often minute, but often not, as is the case of her initial 1945 MGM recording of 'On the Atcheson, Topeka and the Santa Fe' and her Decca New York session that same year at which she did a lower-keyed 'chamber' version of the number. Fascinating listening. No back to back MGM/Decca/Columbia/Capitol set has ever been released, and I thought it was about time."

After the jump, we have more information on the box set as well as the complete track listing!

The Garland Variations draws on recordings from the Decca, MGM, Capitol and Columbia labels, all of which currently reside in the U.K. public domain. Peter Rynston has remastered, and Andrew Aitken has designed the box set. It features new essays by James Fisher of the University of North Carolina at Greensboro; The Judy Room founder Scott Brogan; Broadway’s Christine Andreas (who has portrayed Garland onstage); and Laurent Valière, a journalist at Radio France and producer/host of the program 42nd Street.

The Garland Variations – Songs She Recorded More Than Once is scheduled to arrive on October 27 and can be pre-ordered below!