Ain't That The Shames! Now Sounds Reissues, Expands The Cryan' Shames' Psych-Pop LP "A Scratch In The Sky" 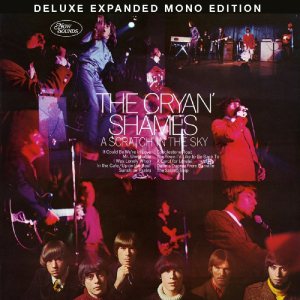 Put “California Girls” in a blender with “Cherish” and you might well wind up with something like “A Carol for Lorelei,” the bright, harmony-drenched pop nugget that opens The Cryan’ Shames’ sophomore album, 1968’s A Scratch in the Sky. Though the Chicago band recorded the LP in New York City, the good vibrations of the Summer of Love were clearly in the air back east for the Columbia Records artists. Whereas the band’s debut album Sugar and Spice was a blast of energetic rock and roll by way of Tony Hatch, George Harrison and Gene Clark, A Scratch in the Sky was an ambitious collection of mainly original songs on which The Cryan’ Shames used the studio as their playground. It’s just been reissued by Now Sounds in a stellar expanded all-mono edition with seven bonus tracks.

Between Sugar and Spice and A Scratch in the Sky, the band suffered a couple of key losses. Rhythm guitarist Gerry Stone was drafted, and replaced by Lenny Kerley. Bassist Dave Purple then departed, replaced by Isaac Guillory. Both Kerley and Guillory were talented multi-instrumentalists, however, and brought new possibilities for the group’s sound when they joined remaining members Jim Fairs (guitars/bass/vocals), Jim Pilster (vocals/tambourine), Tom Doody (lead vocals/autoharp/percussion), and Dennis Conroy (drums/percussion). Sugar producer Jim Golden was joined by Bob Monaco to helm Scratch, but if the producers (owners of the Destination label) were wary of their charges trying something different, it doesn’t show in the finished release featuring nine songs by the team of Fairs and Kerley and just two covers.

The Cryan’ Shames had made an impression with their first LP for strong harmonies and above-average instrumental talents. A Scratch in the Sky would take both of those qualities much further in embracing the nascent, often unpredictable sounds of psych-pop. With no slight to the Shames’ originality, they were able to distill disparate elements with invention and inspiration. Fairs and Kerley’s songs eschewed conventional song structure in large part, marrying intricate melodies, sophisticated arrangements and often impressionistic lyrics.

“The Sailing Ship” is redolent of The Byrds channeling The Beatles’ “Rain,” but goes its own way with Jim Fairs on bagpipes and Jim Pilster on backward cowbell (!). There’s a Brian Wilson beauty and bounce to the sweet, jaunty “It Could Be We’re in Love,” which preceded the album as a single release. Though it’s one of the most straightforward compositions on the album, with euphoric harmony vocals and an infectious melody, it’s still not without its quirks – such as an offbeat interlude punctuated by laughter. Both baroque and jazz styles inform the beguiling “what if” story “In the Café,” while the band runs amok with studio experimentation on the atmospheric, stylistically-shifting “The Town I’d Like to Go Back To.”

Still other productions on the album are leaner. “Mr. Unreliable” was a reworking of the Shames’ third single release, from 1967. With its tempo slowed down and the band more vocally confident, the new version oozed attitude, even if its lingering garage-rock feel and “Day Tripper”-style riff sound a bit out of place on A Scratch in the Sky. “Sunshine Psalm” isn’t what you might think based on the title; it’s actually one of the tougher rockers on the LP, with searing guitar. “Cobblestone Road,” though, has a freewheeling country feel. The hypnotic “I Was Lonely When” was another remake of a 1967 single, also to great effect. A spellbinding ballad worthy of The Association, it just might be the album’s most stunning track.

Whereas Sugar and Spice was dominated by familiar songs, only two covers found a place on A Scratch in the Sky – but they’re both choice. Carole King and Gerry Goffin’s oft-recorded “Up on the Roof” takes on a dreamy, lullaby-esque quality in the Shames’ treatment, with Pilster on French horn. “Dennis Dupree from Danville,” written by Geoff Bryan and Ron Holder of fellow Chicago band Saturday’s Children, is quite a bit more edgy and funky.

After the jump: what bonuses will you find on Now Sounds' new Scratch in the Sky?  Plus: the full track listing and order links!

A couple of non-LP singles were as strong as anything on the album and very much of a piece with it. “Young Birds Fly” from singer-songwriter-pop star Oliver (“Good Morning Starshine”) has Association overtones and a driving chorus that soars with powerful harmonies. The ethereal Rod McKuen-inspired “The Warm” was the work of Jim Fairs as studio auteur, overdubbing all of the vocals and instrumentation. (In Scott Schinder’s excellent, copious liner notes, Tom Doody recalls Fairs as producing the album sessions in all but title.) “Young Birds Fly” and “The Warm” are two of the seven bonus tracks. The disc is rounded out by the mono single edits of five album tracks: “The Sailing Ship,” “Up on the Roof,” “It Could Be We’re in Love,” “Sunshine Psalm” and “I Was Lonely When.” (The original 45 versions of “It Could Be We’re in Love” b/w “I Was Lonely When” predated the album release by months.) These are, for those keeping score, the same seven bonus songs on Sundazed’s previous CD release of A Scratch in the Sky. It should be noted, however, that the Sundazed release presented the original stereo mix of the LP, whereas Now Sounds’ edition is all-mono. The mono mix is a potent one, especially as superbly remastered from the original master tapes by Alan Brownstein for this reissue.

As produced and beautifully designed by Steve Stanley, Now Sounds’ reissue reveals The Shames as exquisite singers and creative instrumentalists.  Though A Scratch in the Sky bested the performance of Sugar and Spice, its No. 158 chart placement didn’t earn the Shames pop immortality. Following more personnel shifts (including that of Jim Fairs), they recorded one more album and began work on a fourth LP before disbanding for good in late 1969. That a group filled with such youthful promise and the desire to musically evolve didn’t break through is, well, a shame. Perhaps Columbia didn’t know how to market the band. Even the album artwork in hindsight seems a misstep, indicating a live album rather than a set of psych-tinged sunshine pop originals. Perhaps, too, the intricate melodies and the abstract lyrics just weren’t universal enough to immediately grab listeners on the AM dial. But A Scratch in the Sky proved that the group, to borrow a phrase from The Association, had “just the right sound.”