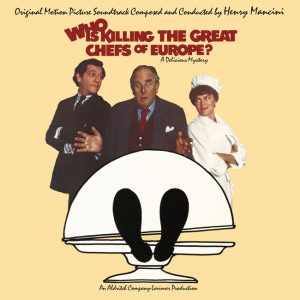 The 1978 film Who is Killing the Great Chefs of Europe? billed itself as “a delicious mystery.”  Naturally, a delicious mystery would require a delicious score.  To accompany the film’s recipe of drama, suspense, comedy and action, director Ted Kotcheff turned to “top chef” Henry Mancini.  No stranger to all of those genres and more, composer-arranger-conductor Mancini crafted a score that became one of the film’s most memorable assets.  The long out-of-print soundtrack album, originally released on Epic Records and produced for records by Joe Reisman, has just arrived in its first-ever CD issue from Varese Sarabande as part of the label’s new Vintage Soundtracks series of limited editions.

Based on Nan and Ivan Lyons’ novel Someone is Killing the Great Chefs of Europe, the movie follows renowned pastry chef Natasha O’Brien (Jacqueline Bisset) who arrives in London to aid in the preparation of a state dinner for the Queen organized by food critic Max Vandeveer (Robert Morley).  Max has recently published an issue of his food magazine highlighting his favorite chefs, and before long, they’re meeting their final fates, one by one, in grisly ways recalling their culinary specialties – i.e. the chef whose specialist is lobster gets drowned in a tank of lobsters, a baker gets offed in the oven, et cetera.  Screenwriter Peter Stone (Charade, 1776) adapted the novel with his trademark wit and ability to blend comedy with true suspense.

Mancini’s score never condescends, from the first notes of its baroque yet sprightly main title.  This cue makes it clear that the film won’t take itself too seriously.  It’s reprised in the cue “The Gathering” in humorously pompous style and again in “Fiery Finale,” which at 4 minutes, 20 seconds is the longest track here and one of the most dramatically action-packed.  Mancini’s cues reflect the European setting (“Pesce!”) and employ the composer’s typical good humor.  “The Moveable Feast,” his spoof of a television cooking show theme, is jaunty and delightfully over-the-top; in parts, it melodically recalls the supremely ironic tune crafted by John Kander for the title song to his musical Cabaret.

But despite the tongue-in-cheek moments, the score isn’t all as light as a soufflé.  “Late Night Call” is one of the cues to best showcase Mancini’s evocative writing for strings.  “Well Done Louis” underscores the death-by-oven of the Swiss chef, and reflects the maestro’s ability to create and control suspense as its eerie, subtle atmospherics build to a crescendo of terror.  The tension -packed “Italian Soup” and “They Hang Chefs, Don’t They?” further demonstrate the composer’s mastery of drama and darkness.  “The Final Feast” is a sorrowful, elegiac melody.

The urbane “Natasha’s Theme” for Bisset’s character is presented in four versions on the soundtrack album, two of which don’t appear in the final motion picture.  It’s introduced in “Bombe Richelieu,” and in “Natasha in Venice,” it takes on a haunting, music box-esque quality.  Mancini himself provides the solo piano on a lovely orchestral rendition recorded especially for the album.  “Natasha’s” isn’t one of the Mancini’s most soaring themes, however, remaining somewhat restrained and appropriately mysterious and tense.  The lush end title version wasn’t used in the film but is the most “pop” and very reminiscent of Mancini’s work on the television drama The Moneychangers from 1976.

We have more details, an order link and the track listing after the jump!

Varese’s reissue is a straight reissue of the original Epic LP, and doesn’t include any additional material languishing in the vaults of Sony and/or Warner Bros.  As per Mancini’s custom in the LP era, the album (slightly over half an hour in length) was designed as a listening experience rather than as a complete representation of the music as heard in the film.  The CD does include new liner notes by Randall D. Larson in its insert; Larson successfully concentrates on relating the music to the onscreen action.  Chas Ferry has nicely remastered the album, and a welcome touch is the replica of the original Epic label on the CD.  Who is Killing the Great Chefs of Europe? isn’t a particularly well-remembered motion picture, nor is its score among the most famous composed by Henry Mancini.  But the legendary composer’s dramatic skill and melodic gift combined to make it a rather tasty treat.  With its long-awaited arrival on CD, dinner is finally served!

Who is Killing the Great Chefs of Europe?: Original Motion Picture Soundtrack is available now and can be ordered directly from Varese Sarabande at the link below!  For more on the current plans to celebrate what would have been the late Henry Mancini’s 90th birthday this year, please visit this feature here at TSD and the new HenryMancini.com!