Give Me the Future: Hear No Evil Label Reissues Meat Loaf’s “Bad Attitude” for 30th Anniversary 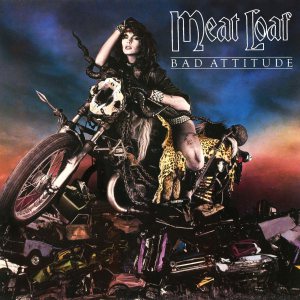 Though he burst onto the scene like a Bat Out of Hell and has enjoyed a 35+-year solo career to date, the artist known as Meat Loaf has never been terribly prolific in the studio.   Over the course of three and a half decades, he has only released 11 full studio solo albums with a 12th due next year. To the casual observer, however, that may seem a high number. After all, his career is often thought to consist of just the two smash Bat Out of Hell albums released 16 years apart in 1977 and 1993. (A controversial third Bat album released in 2006 failed to reach the heights of its predecessors.) The 1980s might be generally ignored by some when considering Meat Loaf’s career, but he was actually at his busiest, releasing four studio albums in five years starting with 1981’s Dead Ringer and ending with 1986’s Blind Before I Stop.   Unfortunately, none of these albums achieved the success of the original Bat, and Meat Loaf’s lack of huge commercial achievement in the eighties is underscored by the fact that the four albums are spread among three different labels. However, recordings from this period are ripe for rediscovery. To that end, Cherry Red imprint Hear No Evil Recordings, following up its reissue last year of the 1987 live album Meat Loaf: Live at Wembley, has just released a 30th anniversary edition of Meat Loaf’s Bad Attitude.

When approaching his third album of the decade of excess, Meat Loaf was still trying to recapture the magic of Bat Out of Hell. This was difficult to accomplish, however, as a result of vocal problems following Bat and the barrage of lawsuits he became embroiled in, including legal dust-ups with the sole Bat songwriter, Jim Steinman. These legal issues lead to 1983’s Midnight at the Lost and Found having no songs by Steinman.   Meat Loaf turned to other songwriters, and even co-wrote four songs himself, for the album. Perhaps unsurprisingly, the resulting effort is generally considered to be one of the weaker entries in the artist’s catalogue. There wasn’t much of a consistent voice due to the 12 (!) writers and even the cover eschewed the typical fantasy paintings of the previous albums for a stark black and white close-up photo of Meat Loaf. It remains one of the poorest selling studio albums in Meat Loaf’s career, not even cracking the top 100 of the Billboard Top Pop Albums chart in the U.S. (although it did notch a number 7 placement on the British charts). Thus, a return to form was sought for 1984’s Bad Attitude on two new labels: Arista in the United Kingdom and RCA in the United States.

With legal issues still looming and reconciliation with Steinman out of the cards, Bad Attitude could not be a complete Steinman album. However, two songs were able to be included: “Surf’s Up” and “Nowhere Fast.” Both of these songs had been previously recorded by other artists. “Surf’s Up” was from Steinman’s own 1981 album Bad For Good, where he recorded the songs he had intended to be Meat Loaf’s follow-up to Bat Out of Hell. “Nowhere Fast” was from the recent soundtrack to the movie Streets of Fire, where it was performed by Fire, Inc. To pen most of the remaining tracks on Bad Attitude, Meat Loaf turned to two songwriters from Midnight: Paul Jacobs and Sarah Durkee. Paul Jacobs was the keyboard player in Meat Loaf’s touring band. Three other tracks on the album feature writing from John Parr, who would have a smash the next year with “St. Elmo’s Fire.” The German producer/engineer Reinhold Mack (credited as just “Mack” on the record), who had been nominated as Producer of the Year at the 1981 Grammys for the Queen album The Game, was brought on to co-produce with Meat Loaf and Jacobs. As an engineer, Mack had also worked with the Electric Light Orchestra, the Rolling Stones and Deep Purple, and brought this considerable experience to Bad Attitude.

We have much more on Meat’s Bad Attitude after the jump including the full track listing and order links!

Bad Attitude received a warmer welcome upon its November, 1984 release from the critics than had its predecessor. The songs were more “rock” than on the previous album. One bona fide rock legend, The Who’s Roger Daltrey, even stopped by to provide a duet on the title track. “Nowhere Fast” and “Surf’s Up” were welcome reminders of the earlier collaborations with Steinman and hold up fairly well in comparison despite being the most electronic-sounding of any of Meat Loaf’s Steinman songs.   “Nowhere Fast” was released as a single and got to No. 67 on the British charts. The most successful single off the album was “Modern Girl” which had a No. 41 placement on the U.S. Rock chart and climbed to No. 17 on the U.K. charts. Ironically, despite the better reviews, the album itself placed one spot lower on the U.K. charts, going to No. 8.   When it was released in the U.S. in April 1985 by RCA, the album was partially remixed and the songs “Cheatin in Your Dreams” and “Sailor to a Siren” were swapped in the track order. It reached a peak of No. 74 on the U.S. chart.

Hear No Evil Recordings’ new reissue preserves the original U.K. mix and track order of the album. It’s housed in a digipak featuring pictures of two of the singles released and a photo from the tour.   The fourteen-page booklet contains many more photographs and new informative essay by the reissue’s producer Hugh Gilmour. Also included in the booklet are small reprints of contemporary reviews and articles from the British press which make for fascinating reading.   Ironically, the inclusion of photos of the album’s singles on the digipak and in the booklet highlights the wealth of additional material not present on the reissue. Three songs released as B-sides from Bad Attitude have never been on CD: covers of “Clap Your Hands” and “Stand by Me” and an original song “Take a Number” (also released at the time in an extended mix). In addition, 12” mixes of “Nowhere Fast,” “Modern Girl” and “Piece of the Action” as well as a single edit of “Nowhere Fast” all exist and await CD release. There’s been much speculation on the Meat Loaf UK Fanclub’s website this material might not have been available for Hear No Evil to license.  A VHS tape of a concert form the U.K. was also released at the time. Bad Attitude – Live! remains in limbo in the DVD era. The album has been newly remastered for this reissue by Andy Pearce.

The 1980s are not usually considered a bright spot in Meat Loaf’s career. Yet, as a result, there’s a wealth of material to explore. If you would like to dig a little deeper into the Meat ouevre, Cherry Red’s reissue of Bad Attitude is worth the time.