UPDATE 6/2: It now appears that Capitol Records will be releasing this box set in the U.S. on July 15!  See below for updated Amazon links and more!

ORIGINAL POST (5/5/14): Attn: Beatle collectors – you know who you are! On June 25, Universal Music Japan is extending an invitation to Meet the Beatles as you would have fifty years ago in that country. The new Meet the Beatles box set presents mini-LP CD replicas of five albums released by the Fab Four in Japan in 1964 and 1965. As with the recent release of The U.S. Albums, it is indicated that this box set will be sourced from The Beatles’ approved 2009 remasters:

Each mini-LP replica “faithfully replicates the original Japanese album artwork, including OBI and inner sleeve.” These are available on legitimate CD for the first time anywhere in the world, and longtime Beatlefans will notice a number of variations from the U.S. and U.K. editions of these albums. Not included in this set is 1965’s Beatles for Sale, which would have functioned as Beatles No. 4 and mirrors the track listing as the original British album of that name. Also a number of Japanese compilations have naturally been excluded, like 1964’s The Fresh Sounds from Liverpool (which joined Beatle tracks with those by Peter and Gordon, The Hollies, Billy J. Kramer and the Dakotas, and others) and 95 Million People’s Popular Request (with the Fabs plus Matt Monro, The Dave Clark Five, Cliff Richard and more).

The Beatles’ Japanese releases arrived via the Toshiba-owned Odeon label. Titles were initially released on both black and red vinyl, with the highly desirable red vinyl indicating the first pressing of a title. Meet the Beatles was the first Fab album to hit Japan, with a release date of April 1964. The group’s first two U.K. long players, Please Please Me and With the Beatles, weren’t released in Japan until 1966 – after the country had already received Rubber Soul - when the group toured there. As is still the custom today, the LPs were issued with OBI strips wrapped around the covers. 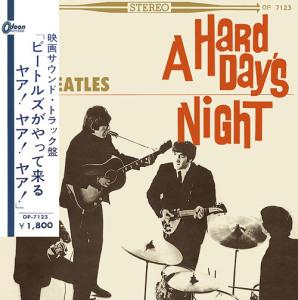 Meet the Beatles! resembles the American album but has a different track listing with 14 tracks instead of 12, orange and red lettering on the front cover (instead of blue and brown) , and a unique back cover. Second Album (or Beatles No. 2! per its back cover) follows suit, with 14 songs vs. the U.S. version’s 11, and red lettering rather than brown on the cover, and different rear artwork. The Japanese A Hard Day’s Night replicates the original U.K. album’s track listing, but varies in its art. Beatles No. 5 shares “She’s a Woman” and “I Feel Fine” with its U.S. counterpart Beatles ’65, but little else. Help! , like A Hard Day’s Night, maintains the original U.K. album track listing. It also retains the familiar U.K. front cover artwork, adding a gatefold and a color back cover image.  Even the OBI strips are being replicated, with the first three albums having shorter strips that didn't cover the entire length of the album cover.

Those first three albums will be presented in mono, with the final two in stereo.  Help! is surprisingly listed as being in its "original stereo mix."  The U.S. Albums, in contrast, utilized producer George Martin's 1987 stereo remix in assembling the U.S. version of the album.

Hit the jump for more on this Japan-exclusive box set, including the complete track listings and current pre-order links!

Though “subject to change,” the Meet the Beatles! box is currently slated to include a 100-page booklet with Japanese contents. Its CDs will be pressed in Japan, and the cardboard sleeves are also being manufactured in Japan in accordance with that country’s lavish packaging practices. Amazon links are now available for Capitol's U.S. pressing due on July 15.  Thanks to our friends at Musictap for the heads-up!   You can peruse the track listing and pre-order links below! 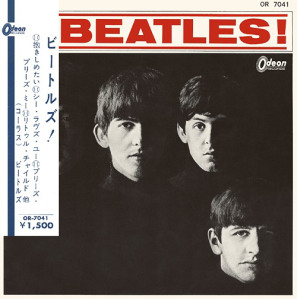