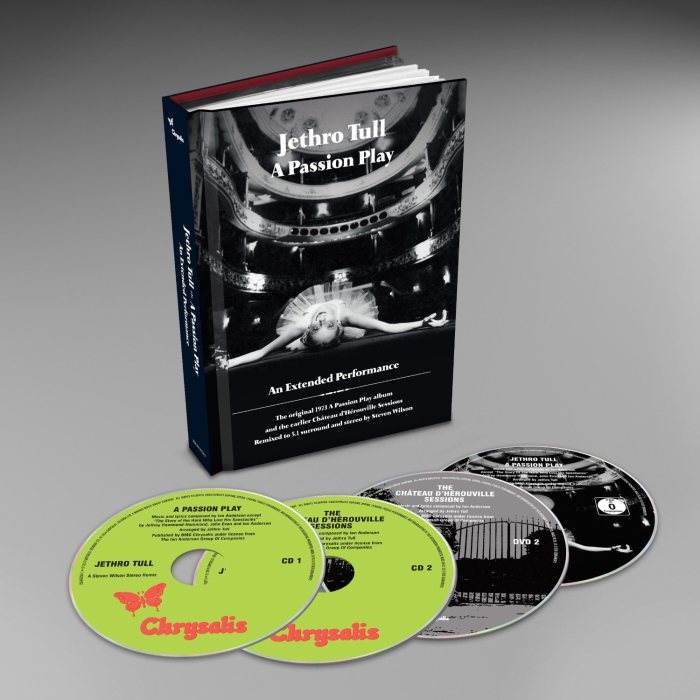 Jethro Tull continues its series of deluxe reissues with producer/engineer Steven Wilson on July 1 with the release of the (slightly belated) 40th anniversary edition of 1973’s A Passion Play.  Following the reissues of Aqualung, Thick as a Brick and Benefit, the deluxe A Passion Play: An Extended Performance will include 2 CDs and 2 DVDs – containing new stereo and 5.1 surround mixes of the original album and previously unreleased material - along with an 80-page book.  As with Thick as a Brick, the set is priced affordably; as of this date, it’s available for pre-order at a cost of less than 30 dollars.

A Passion Play was the band’s sixth album, and arrived on the heels of the U.S. chart-topping Thick as a Brick.  Whereas that album featured one lengthy, continuous composition (split on two sides of vinyl, of course), A Passion Play featured separate songs, though the original LP did not identify them.  Part I occupied Side One of the LP, with Part II on Side Two.  The same line-up as Thick as a Brick played on its follow-up: Ian Anderson on flute, acoustic guitar and saxophone, Martin Barre on guitar, Jeffrey Hammond-Hammond on bass, Barriemore Barlow on drums and John Evans on keyboards.

The quintet began work at Château d'Hérouville.  The studio, located near Paris, was the Honky Château of Elton John fame, and was also utilized by artists from Cat Stevens to Pink Floyd.   Yet the band found that it was not the ideal setting to bring their new album to life.  Despite recording roughly an hour of music, the band was dissatisfied with both the studio’s technology and its living accommodations.  The group returned home to the U.K. where work began on an all-new set of songs and recordings.

Recorded in a whirlwind of activity before the band was set to begin a new tour, A Passion Play was composed (primarily by Ian Anderson) to explore the notion that choices might still be faced in the afterlife.   Taking the form of a four-act play, it began with the character of Ronnie Pilgrim’s death and funeral (which he attended in spectral form) and followed him through the afterlife, to Heaven, Hell and beyond.  Par for the Tull course, it combined poetry and rock, and melded rock, jazz, and folk sensibilities into an intricate whole.  Though it didn’t meet with critical acclaim at the time, the prog-rock opus followed Thick as a Brick to the top of the U.S. charts upon its release in July 1973.

After the jump: more details on what to expect from the new box set, plus the full track listing and pre-order links!

The upcoming 2CD/2DVD set is packaged in a casebound book format featuring both the original album and earlier Château d'Hérouville sessions in brand-new stereo and surround mixes from acclaimed producer-engineer Steven Wilson.  An 80-page booklet accompanies the set, and includes an extensive article by Martin Webb on the preparation and recording of the album and the abortive sessions that preceded it.  Wilson contributes his reflections on mixing the recordings, and other recollections are shared by The Rev. Godfrey Pilchard and Chris Amson.  A 1973 tour chronicle rounds out the offerings in the extensive booklet.

A Passion Play will also be available in a gatefold heavyweight vinyl edition containing Wilson’s new stereo mix of the original album and a 24-page book with Wilson and Pilchard’s notes.  A Passion Play: An Extended Performance is due in stores on July 1 from Chrysalis/Rhino.  You can peruse the track listing and pre-order below!