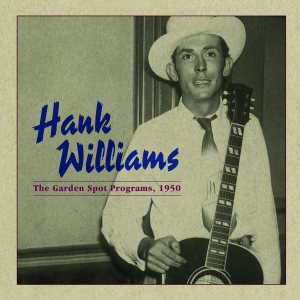 Hello everybody, Garden Spot is on the air/So just relax and listen in your easy rocking chair/Music for the family in the good old-fashioned way/I hope that we can please you, bring you sunshine every day!

That bucolic, peppy introduction opened Naughton Farms' Garden Spot radio program, "the show that brings you all your favorite folk music singers."  One such "folk music singer" in 1950 was Hank Williams.  Omnivore Recordings' new The Garden Spot Programs, 1950 (OVCD-87, 2014) preserves 24 tracks from four of these programs which haven't been heard since their initial broadcasts.  In fact, nobody even knew these recordings existed until a deejay and author, George Gimarc, found them on transcription disks from Creston, Iowa's KSIB radio station in 2013.  With the cooperation of the Williams estate, Omnivore has issued these lost treasures on a splendid single-disc presentation.

Radio has always played a key role in the country music story, largely due to the popularity of WSM's Grand Ole Opry.  Williams was no stranger to sponsored radio programs; he had been pitching items on radio since 1937.  Many of these performances made their way to records, including for Johnnie Fair Syrup and patent medicine Hadacol.  His 1951 shows for Mother's Best, a flour and farm feed company, also famously survived.  The Garden Spot Programs of 1950 were sponsored by Naughton Farms, a mail-order plant nursery in Waxahachie, Texas.  Despite the company's Texan origins, the programs were recorded in Nashville, Tennessee.  The format was simple - Williams would perform, and during breaks, a local announcer would appear on-air.  He would inform the audience of the plants for sale and provide instructions to write the station to buy them.  Radio station personnel would process the C.O.D. orders and pass them onto Naughton Farms for fulfillment.

Williams made the recordings featured here at Castle Recording Laboratories in Nashville's Tulane Hotel, not far from Opry flagship WSM.  Once the recordings were made, they were transferred to the 16-inch transcription disks and sent to radio stations across the country for broadcast; only the KSIB disks discovered by Gimarc are known to survive.  The station apparently preserved the disks well, too.  The clarity of these recordings, as restored and mastered by Michael Graves, is shockingly good.  For the Garden Spot sessions, Williams wasn't joined by his usual Drifting Cowboy Band, and indeed, there's no evidence as to who was performing alongside Williams.  Longtime Williams historian Colin Escott, in his typically erudite liner notes, surmises that the steel guitarist could be Don Davis (rather than Don Helms) or more likely, Clell Sumney, and takes a reasoned guess that the fiddler might be Dale Potter.  In any event, though, these musicians bring a different sound to Williams' songs than the Drifting Cowboys.

This disc, produced by Escott and Omnivore's Cheryl Pawelski, recreates what it must have been like to listen to the original programs with jingles and between-song banter.  Of the disc's 24 cuts, 12 are proper songs - other tracks are jingles, brief, hoedown-ready instrumental fiddle tunes, and finale performances of Stephen Foster's 1848 American standard "Oh! Susanna."  Stick around after the final listed track, too, to hear a three-minute commercial for Naughton Farms' rose bushes "that will make your yard the beauty spot this spring!"

We have plenty more after the jump, so stick around, won't you?

There's a twang in Williams' voice and his guitar, and of course, a yodel on "Lovesick Blues," which is heard in two different performances.  Singing his breakthrough song written by Irving Mills and Cliff Friend, there's rawness and piercing honesty in Williams' vocal, the downbeat lyrics set ironically against the accessible, catchy melody.   These recordings of "Lovesick" are unique in the Williams canon for the tropical-leaning steel guitar licks.

The various strains of Williams' music are addressed on these four programs: pure country heartbreak ("Lovesick Blues"), classics of the repertoire ("Oh! Susanna!"), balladry (the "At the First Fall of Snow"), gospel ("Farther Along," "Jesus Remembered Me"), and even proto-rock and roll ("Mind Your Own Business").  The latter is a rollicking bit of pre-rockabilly swagger that showcases Williams' lighter side.  The same goes for "I'll Be a Bachelor 'Til I Die" ("Get that marryin' out of your head...").  "Wedding Bells (Will Never Ring for Me)" - written by Arthur Q. Smith but credited to Claude Boone - is a companion piece of a sort.  Of course, in reality wedding bells rang for Williams twice - even if the second marriage was declared invalid after his death!

There's a surprising amount of darkness for a commercial endeavor.  Williams is painfully mournful on the elegiac "I've Just Told Mama Goodbye" ("Mother's Day has turned to night/Like the flowers in May, she wilted away/And my red rose is turning white..."), a then-recent B-side.  (Escott wryly notes, "Hank sings with such gut-wrenching sincerity you'd never know that his mother outlived him by two and a half years, or that she wasn't the sainted presence we find in this and most other 'dying mother' songs.  Hank once told a band member that all he needed in a fight was his mother standing behind him with a broken bottle."  Ouch!)  As its lyrics go, Lorene Rose's "At the First Fall of Snow" is another "story of sorrow and woe"   Sadly, the death of a child, as addressed in the song, was a situation sadly familiar to Williams, whose older brother had died shortly after birth.

The singer inimitably delivers his paean to a two-timing woman "I Just Can't Get You Off Of My Mind" as well as "I Don't Care If Tomorrow Don't Never Get Here," as he calls it.  "I Don't Care (If Tomorrow Never Comes)" is darkly despairing yet ironically arranged in jaunty fashion.  The gospel moments are likewise striking.    Early 20th century southern gospel staple "Farther Along" became a favorite of numerous country-rockers to come as well as more traditional folk and country artists.  Williams' own, rousing "Jesus Remembered Me" has taken on even more meaning in light of Williams' tragic death in 1953 at just 29 years of age.

The enduring appeal of Williams' music can be attributed to a number of factors, not least of all the universality that allowed his songs to be recorded by jazz singers and pop idols alike.  That universality, and his enduring ability to touch an audience even sixty-odd years after his passing, is in ample evidence on The Garden Spot Programs 1950.  It's a worthy companion to previous projects that have kept the Williams flame burning, like 2011's The Complete Mother's Best Recordings and The Lost Notebooks, the latter of which set previously unheard Williams lyrics to new melodies composed by contemporary artists.  The Garden Spot Programs 1950 is one of the most important archival releases of the year, and also one of the most entertaining.

Hank Williams' The Garden Spot Programs 1950 can be ordered at Amazon U.S. and Amazon U.K.!