A new round of reissues dedicated to progressive titans Emerson, Lake and Palmer are on the way from the BMG label beginning this July and continuing through 2016 and 2017.  This new campaign promises to encompass not only ELP’s nine studio albums but also the band’s live recordings and compilations.  The reissues will arrive in a variety of formats including CD (with new liner notes by Chris Welch drawing on 2016 interviews with Greg Lake and the late Keith Emerson); standard, mastered for iTunes and high-resolution digital downloads; and 140-gram vinyl.  (Note that, in contrast to other recent reissues of this catalogue, there are no physical high-resolution format or surround-sound components here.)  The first three ELP albums are scheduled for reissue on July 29: Emerson, Lake & Palmer (1970), Tarkus (1971) and Pictures at an Exhibition (1971).

Emerson, Lake & Palmer, first released after Emerson, Lake and Carl Palmer debuted in concert at the 1970 Isle of Wight Festival, kicks off the proceedings as a 2-CD set, with CD 1 comprising the original album in its 2012 remastered edition. CD 2 offers the Alternate Album in its 2012 Steven Wilson stereo mix, with bonus tracks. The LP version will be the original album, newly cut for the first time from 24 Bit/HD 2012 remasters. The standard Digital Download will comprise the remastered 1970 album and an Alternate Album (2012 Stereo remix) with bonus tracks. The same contents will be available in Mastered for iTunes and HD digital formats, all taken from the 2012 remasters. 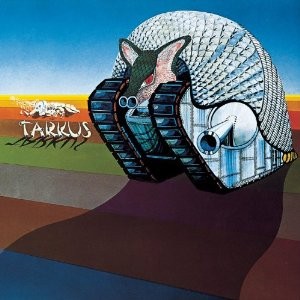 Tarkus built on the success and sound of its predecessor, introducing even more intricate textures to the group dynamic.  The title track took up one full side of the original vinyl which reached No. 1 in the United Kingdom and No. 9 in the United States.  The first disc of the new CD edition features Andy Pearce’s 2012 remaster, while the second disc has the Steven Wilson stereo mix with bonus tracks from the original sessions.  The LP version is newly cut from the 2012 remaster, with its original gatefold sleeve and artwork reproduced. The three digital download versions are also taken from the 2012 remasters.

Pictures at an Exhibition, also from 1971, brought ELP’s classical influences to the fore.  It met the group’s loftiest ambitions, reaching No. 3 in the U.K. and No. 10 on the U.S. chart.   The new vinyl edition and Disc One of the CD feature a new remaster of Pictures from the original master tapes and a bonus medley recorded live at the Mar y Sol Festival in Puerto Rico on December 4, 1972.  The second disc of the CD edition has a live performance of the extended work captured at the Lyceum Ballroom, London, on December 9th, 1970, along with live performances of “The Barbarian,” “Knife Edge,” “Rondo” and “Nut Rocker.”

The new 3-CD/DD release of Emerson, Lake & Palmer – The Anthology rounds out this first wave of titles.  Produced by Greg Lake, this career-spanning set has 39 tracks from the years 1970 to 1998, the choice of material approved by all three band members. It’s housed in a casebound book format with Chris Welch’s liner notes and rare photographs.

Reissues of Trilogy (1972), Brain Salad Surgery (1973) and the live Welcome Back My Friends to the Show That Never Ends (1974) are all on BMG’s docket for the rest of 2016.  While you’re waiting for those, you can check out the first four releases on July 29!  They’re available for pre-order at the links below!