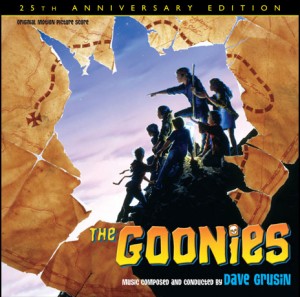 Varese Sarabande made headlines last month when it was revealed that the venerable label had been acquired by Concord Music.  Today, Varese has announced the opening of a new online vinyl store on March 30.  The Varese Vinyl shop will inaugurate its sales with three limited, numbered, exclusive soundtrack LPs: John Carpenter and Alan Howarth's Christine on "Fury Red" vinyl; Bob Crewe and Charles Fox's Barbarella on 180-gram vinyl; and Dave Grusin's The Goonies on a 2-LP "Willy's Gold" colored vinyl edition.

Back in 2010, Varese premiered Dave Grusin's score to the eighties classic The Goonies on CD.  The Steven Spielberg-produced comedy about a group of misfits who find a pirate treasure map attained cult classic status almost immediately upon its release in 1985. Veteran composer Grusin's diverse score was an undisputed highlight of the film, but the original soundtrack release on Epic Records offered just one cue, the score's main theme, plus songs from Cyndi Lauper ("The Goonies 'R' Good Enough"), Luther Vandross, Philip Bailey, The Bangles, and others.  This 2-LP edition premieres Grusin's complete instrumental score on gold-colored vinyl.

1983's Christine, an adaptation of Stephen King's supernatural thriller about a murderous car, was both directed and composed by John Carpenter.  Its original soundtrack album, too, emphasized songs over score cues, featuring just one ("Christine Attacks") surrounded by George Thorogood's "Bad to the Bone" and vintage oldies from Buddy Holly, Little Richard, Danny and the Juniors, and more.  Varese released the Carpenter/Alan Howarth score on CD in 1989, and now it's arriving on red vinyl.

Lastly, Varese is going groovy with a 50th anniversary, 180-gram black vinyl presentation of the Barbarella soundtrack.  The long out-of-print score to director Roger Vadim's sci-fi camp classic starring Jane Fonda was pressed on a picture disc by Varese in 2016 for its first authorized reissue, and remastered from the original analog source tapes!  Music doesn't get much more swingin' than this on this groovy classic from two of our favorite songwriters, Bob Crewe and Charles Fox.  It's music to watch (space) girls by!

All three exclusive releases will be available from Varese Sarabande in limited quantities beginning March 30 directly from the label's website!