Iggy Goes Back to “Kill City” 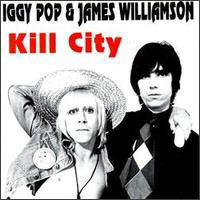 A bit of news that had slipped through the cracks: a reissue of a lesser-known record in the Iggy Pop catalogue. This one is a remixed and remastered version of Kill City, his 1977 collaboration with James Williamson.

Recorded in 1975 after The Stooges imploded (while Pop was in treatment for a heroin addiction), Kill City is another protopunk effort with some great efforts by Williamson (ex-guitarist for The Stooges). While it may not have the impact that those Stooges LPs still have, it was an important stepping stone for Iggy between his old band and his solo creative resurgence with David Bowie in the latter half of the ’70s.

This reissue is due out on October 19 from Alive Naturalsound/Bomp! Check out the original track list after the jump (no bonus material has been confirmed).