With Halloween almost approaching, there's never been a better time to revisit notable horror film scores than with our ongoing series of Friday Features.

This week, we cover the first two, multiply-reissued scores in the infamous Alien franchise. Happily, both of the reissues discussed herein are readily available, so if you're inspired to hear the music of these classic films, you don't have to dig particularly deep.

Have a read after the jump - and remember, in space no one can hear you scream.

Star Beast. That was the original name on the script conceived by Dan O'Bannon and Ronald Shusett. It had taken a few years and a score of rewrites, but the core plot was there: in the future, a freighter full of space workers is interrupted on their return trip home to investigate a mysterious distress signal. A planetary investigation yields the discovery of a mysterious group of eggs, one of which hatches; the being inside attaches itself to a crew member, and before long the crew has an unknown, extremely dangerous stowaway to contend with.

That's simplifying it, of course; the whole film was itself a simplification of some of the best sci-fi tropes ever written. (Of course, the title itself was simplified after it was noted how many times "alien" appeared in the script.) But did it ever work, because Alien took the simple and turned it upside down. There was Hitchcockian suspense combined with a slasher film ethos. The Star Wars-ian sensibility toward space - in which space wasn't a promising playground but a drab, worn down work place - was present. The violence was sudden but not tasteless, outside of the iconic sequence where a crew member serves as the unwitting host of the alien. And, perhaps most notably, the hero wasn't a muscle-bound male lead but a woman; the tall, slender Sigourney Weaver was iconic as Lt. Ellen Ripley, a role that not only redefined her career but the notion of women in science fiction.

All in all, the film was a massive hit for 20th Century-Fox in 1979. And that creature - a snarling, seven-foot-tall xenomorph with an elongated head and a deadly second set of jaws - became a sci-fi horror icon. For the film's score, Jerry Goldsmith was called in to compose the music for Alien. It wasn't that unusual a choice; contemporary John Williams won an Oscar for Star Wars (Fox's other sci-fi franchise of the late '70s), and Goldsmith was already a notable name in the film world (more so than director Ridley Scott's first choice, the Japanese electronic music composer Isao Tomita).

That's not to say the scoring process was painless. Goldsmith would end up being at odds (though not bitterly so) with Scott's ideas of how the soundtrack should progress, and the finished score sounds greatly unlike what the composer had tried to provide. A romantic main title cue was shelved in favor of a dissonant, suspenseful one. Cues from previous Goldsmith films (notably the score to the 1962 film Freud), as well as the composer's temporary cues, found their way into the final film instead of some of the intended pieces, alongside several classical source cues.

Against all odds, though, the Alien score worked, and Scott has had nothing but praise over the years for Goldsmith's work. The LP, naturally comprised of remixed and re-recorded cues, was critically acclaimed. 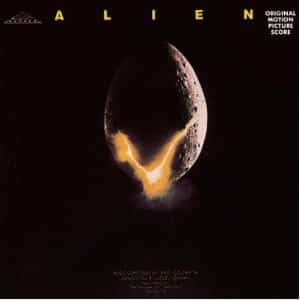 There's a deleted scene in the climax of Alien, in which Ripley discovers several of her crew mates, having been seemingly devoured by the alien, instead slowly morphing into more eggs, continuing the perpetuation of the beastly species. Director James Cameron probably didn't know about that scene while penning the sequel to Alien, but it ironically influenced the tone and theme of the sequel. Ripley, the sole survivor of the first film, was never properly rescued until some 67 years in the future. She's promptly taken out of hypersleep and asked to lead an expedition of Colonial Marines to a colony foolishly built upon the Alien homeworld. Here, we learn that the aliens aren't lone serial killers, but powerful drones determined to proliferate their species at the primal behest of a massive Queen Alien.

There's a lot to love about Aliens, which Cameron wrote while filming The Terminator in 1984. He took influence more from action films than sci-fi and suspense; ironically, they were some of the standbys that The Terminator helped proliferate. The Colonial Marines eerily parallel the stance of U.S. forces in Vietnam, while Ripley is reinvented as a sort of super-heroine, capable of beating the odds to put the xenomorphs in their place. (Ripley is still a tender character, though, particularly as the caretaker to the little girl who managed to survive the decimation of the colony. For her efforts, Weaver was nominated for an Oscar.) Aliens can almost be taken as a separate experience from Alien, but both of them work - and we all know how rare a stellar sequel is in Hollywood.

For the soundtrack to Aliens, a young composer named James Horner was commissioned to pen the score, having impressed with unique scores for action and sci-fi films like Star Trek II: The Wrath of Khan (1982) and Star Trek III: The Search for Spock (1984). When Horner came to join the post-production team in England, he expected an intense but wide-open window of six weeks to finish the music. However, post-production was running far behind schedule - the film was half-edited and undubbed - and Horner was tasked with writing the score in only four days. Tensions between the composer and the director (who was not used to working with composers like Horner) ran high, with Horner bemoaning the lack of preparation he was given and the resultant product which he felt wasn't fully up to snuff.

Interestingly, the public disagreed. The Aliens score was very popular, earning Horner an Oscar nomination. The filmmaking community also latched onto the soundtrack in an unusual way: the cue "Bishop's Countdown" has been utilized in a host of action film trailers. That track and eight others were featured on the original soundtrack, released on the Varese Sarabande label. (And Horner? He and Cameron have since made amends, working together on Titanic and Avatar.)

Even after two additional, lukewarm sequels - 1992's Alien3, which featured music by Elliot Goldenthal (the album was well-received but original score masters are presumed lost, preventing an expanded release) and Alien Resurrection (1997) (whose score by John Frizell was recently expanded by La La Land Records) - the Alien franchise was still a heavy hitter on home video. Ultimately, for the 15th anniversary of Aliens, Varese expanded the score, including a host of unreleased music plus several alternate cues. 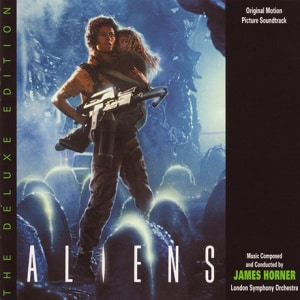 The massive DVD release of the Alien series in 2003 - still a high watermark for lavish DVD box sets - increased the interest in the music of the series; each film had a score-only track included. This particularly got people interested in the unusual intricacies of the Alien score, and soon enough the demand for an expanded Alien got louder. Then, at the end of 2007, Intrada Records - the little indie that could - worked with both Fox and music rights holder Universal to release a complete presentation of the film and secured a deal to issue it without any limits. While most score reissues get limited releases to a few thousand copies, this one will (hopefully) be in print for years to come. It certainly put Intrada on the map for many collectors, allowing them to release scores that nobody ever expected to see released. 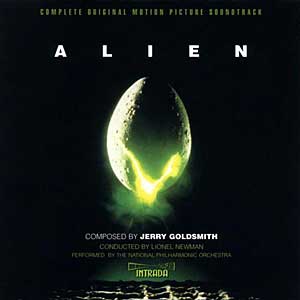