Here’s another new feature for your consideration at The Second Disc: reissues of classic albums are the core of our coverage, but we’d be remiss if we didn’t mention the other, odder batches of reissues. You know, the ones that come out after a record does alright on its own, to squeeze some more juice from the rinds. It’s easier to be more cynical about these sets, but everything deserves its own place. 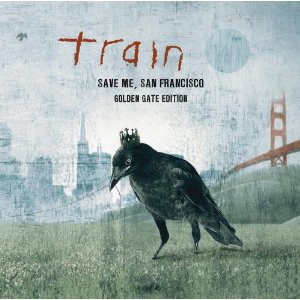 Train, much like Ken Jeong’s character on the show Community, is a band that can never die. Thought “Meet Virginia” would consign them to one-hit wonder status in 1999? “Drops of Jupiter” was there to push them back into your consciousness in 2001. Then “Calling All Angels” in 2003. Then…more or less nothing, until “Hey, Soul Sister” grabbed your radio by the neck and refused to let go all through the past year.

Now, Columbia plans to release a new version of the album which spawned “Hey, Soul Sister” in time for the holiday rush. Save Me, San Francisco: Golden Gate Edition includes six extra tracks, including a remix of new single “Marry Me” and “Shake Up Christmas,” obviously intended for seasonal playlists.

Head-shaking aside, Train have been consistent in their production of semi-catchy pop-rock over the past decade or so; thus, you won’t be judged if you end up picking this set up for yourself or the people you love.

The track list for this new reissue is after the jump.