Reissue Theory: Quincy Jones, “Back on the Block” 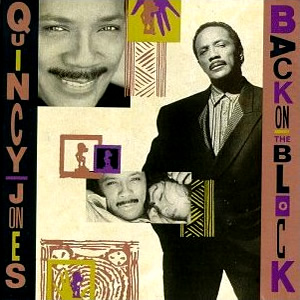 Welcome to another installment of Reissue Theory, where we reflect on well-known albums of the past and the reissues they could someday see. This week, Quincy Jones’ latest mingling with a new generation of artists leads to a recollection of the first (and best) time he did it.

Last week saw the release of Q: Soul Bossa Nostra, the first full-fledged studio album by Quincy Jones since Basie and Beyond back in 2000. Now, Q is one of the greatest figures in pop and soul music alive today. He’s been nominated for more Grammys than anyone (79 nods, 27 wins), produced the highest-selling album of all time (Thriller, naturally) and maintains a healthy role as musical elder statesman and social activist, even at 77 years old.

Naturally, the album is exactly what you’d expect it to be: part victory lap, part reach across the aisle to a new generation of artists and almost entirely unnecessary on a Santana post-millenial level. “Ironside,” “The Streetbeater (Sanford & Son),” “Strawberry Letter 23” and “Pretty Young Thing” aren’t screaming out for guest appearances by Akon, Ludacris, John Legend, T-Pain, but they’re all bizarrely recast here. And that list doesn’t even mention the truly insane cover of “The Secret Garden (Sweet Seduction Suite),” a 1989 quiet-storm jam that originally featured Al B. Sure!, James Ingram, El DeBarge and Barry White but now features Usher, Tyrese, Robin Thicke, LL Cool J, Tevin Campbell and the vocal track of Maestro White echoing from beyond the grave.

It’s not that the all-star/new-generation formula is alien to Jones; hell, he practically pioneered it two decades ago with Back on the Block, the album from which “Secret Garden” came from. That disc also featured appearances by Ray Charles, Chaka Khan, Siedah Garrett, Tevin Campbell (one of his first appearances on record), Ice-T and, in their last recorded appearances, blues/soul legends Ella Fitzgerald and Sarah Vaughan.

Call it ridiculous if you want, but Back on the Block easily predicted the success of Santana’s Supernatural and the like by peaking within Billboard‘s Top 10 and winning seven Grammys including Album of the Year. Unlike Santana, though, this isn’t your contemporary cash grab; there’s a lot of stuff here for everyone, from traditional soul and blues to rap and even some jazz fusion. The formula may be played out (and the artists of today nowhere near as laudable as prior generations had been), but Back on the Block proves, in a roundabout way, Jones’ ability and desire to unite audiences of all walks of life with his music.

After the jump, take a look at our idea of what a slightly expanded Back on the Block could look like, featuring five of the many remixes commissioned in support of the album, including a head-turning cameo by British electronic act 808 State!