There were many scores that soundtrack fans were hoping for on CD in 2010. But few are sought after more than the score to Gremlins (1984), a wacky, synthesizer-based romp from composer Jerry Goldsmith. It would have been a fantastic grab from one of the major labels for the Christmas season, but it looks like it may be another long wait before the score is released.

But with Christmas around the corner, why not bring up one of the most wickedly fun film scores Goldsmith wrote in the '80s? Your trip to Kingston Falls begins after the jump.

It's ironic that Gremlins spawned a host of imitators as the decades wore on (Critters and Ghoulies among the worst offenders), because the initial screenplay greatly resembled those films. Inspired by some strange animal noises coming from above writer Chris Columbus' loft, the main plot was the same: a man buys a strange creature (called a Mogwai), is given rules for taking care of said creature, son receives creature as a Christmas gift and inadvertently breaks the rules, all hell breaks loose. But the characters weren't as well-fleshed out, and the violent acts of the gremlins were borderline pathological. (Not to say that the final film wasn't criticized for violent content, but more on that in a bit.)

Columbus was an untested writer with his spooky spec script, but he soon found a major supporter in his endeavor: director Steven Spielberg, whose Amblin' Entertainment had begun producing fantasy films to major box-office returns. He encouraged Columbus to change the tone from pure horror to a script where laughs came as often as screams, and hired a crack director - Joe Dante, the Roger Corman protegee who'd directed the cult classic/JAWS rip-off Piranha in 1978 - to make the film happen. Between the solid cast of leads (likable young talents Zach Galligan and Phoebe Cates played the young duo forced to fight back against the gremlins) and veteran supporters (Corman regular Dick Miller as xenophobic neighbor Mr. Futterman, Hoyt Axton as Galligan's father, Keye Luke as the mysterious owner of the Mogwai), a nicely-designed suburban set on the Universal backlot (film buffs note: the main street of Kingston Falls would be used one year later as the main street of Hill Valley in Back to the Future!) and advanced creature design from effects master Chris Walas, the stage was set for what Roger Ebert would praise as a cross between It's a Wonderful Life and The Blob.

Goldsmith took it upon himself to emphasize the lighter side of the film, punctuating the orchestra with synths and odd sound effects (notably a wailing cat, pitch-bent through a synthesizer) while still creating wildly distinctive themes for characters and events. Gizmo was given a sweet melody that was often played on high strings or, in the film, sung by a child actress whenever the Mogwai himself hummed it. The standout, though, was the hummable, wacky "Gremlin Rag," the main theme for the film that became one of Goldsmith's signature tunes. The composer himself reused it several times, including one of his final scores, Looney Tunes Back in Action (2003).

Gremlins was one of the biggest blockbusters of 1984, in spite of the growing controversy over its violent content. (Audiences expected a film advertised with Spielberg's name on it to be more like E.T. the Extra-Terrestrial; instead, audiences got evil creatures exploding in microwaves.) All was settled later in the year, when the PG-13 rating was invented. Warner Bros. begged Dante for a sequel; he finally agreed in 1990, but demanded full control of Gremlins 2: The New Batch. The result was a hysterical meta-sequel that plays out like a MAD magazine article. Sadly, outside of a cute British advertisement, there's been little Gremlins action in the 21st century. (Dante has sworn off a third film, realizing that the digital technology that would create the gremlins today would never surpass either Walas' work for the original or Rick Baker's for the sequel.)

The film was enough of  a success to merit a soundtrack, albeit one very much of its time. Four suites of Goldsmith's score sat on one side, while three pop songs were on the other. Those songs are actually particularly collectible for fans of the artists involved, particularly "Out Out," the lengthy dance track performed by Peter Gabriel and produced by CHIC's Nile Rodgers. While the original soundtrack - presented as a budget title on LP - was pressed on CD by Geffen in the 1990s, it quickly fell out of print and fetches high prices on the secondary market. (A cursory check of Amazon, as of this writing, puts CD copies around $75.)

Someday, we hope, Gremlins will get its own expanded release on CD, ideally keeping the pop tunes while expanding the score. In the meantime, though, take a look at what is out there below. 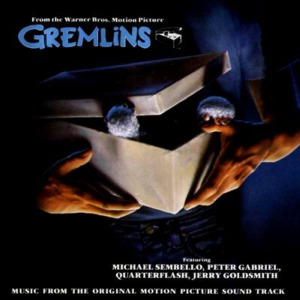 "Mega Madness" was released as a 7" single (Geffen 7-29255) with "Late for Work" (an edit of "Gizmo" featuring the jaunty music accompanying Billy's snowbound trudge through Kingston Falls) as its B-side. (German copies had "The Gremlin Rag" on the other side. Thanks to reader Greg for pointing this out!) "Out Out" was pressed as a 12" single with "Gizmo" on the B-side (Geffen 12A-4953).