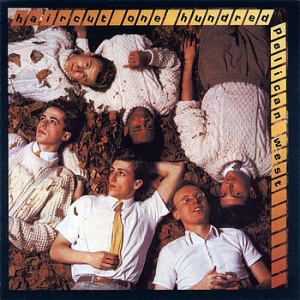 Welcome to another installment of Reissue Theory, where we reflect on well-known albums of the past and the reissues they could someday see. Today, a semi-obscure '80s band is dusted off - particularly their harder-to-find extended remixes.

Really, this is all Jeff Giles' fault.

The Popdose editor-in-chief tweeted a link that '80s one-hit wonder (at least in the U.S.) Haircut One Hundred are reuniting later this month to play their 1982 debut LP Pelican West in its entirety at London's IndigO2. Now of course that's kind of funny, because it's a performance/reunion that nobody was particularly looking for. But you market it well enough and keep it affordable, and fans are likely going to show up.

That's theoretically true of reissues, too. Sure, independent labels have their obstacles as far as getting into stores or getting eyeballs toward their order pages - that's why sites like this exist - but anything is possible in this crazy industry. Of course, that means a deluxe edition of Pelican West is just as feasible; the record had four U.K. Top 10s, including biggest hit "Love Plus One" (a U.S. Top 40 and constant staple of '80s compilation albums), and there were a host of B-sides and remixes to choose from.

But has it been done before? Hit the jump to learn more.

A reissue of Pelican West would in fact be the second expansion of the album. For its 10th anniversary, Arista released in Europe an expanded version called Pelican West Plus (Arista 74321 10078-2, 1992), which featured three B-sides and two remixes. It wasn't complete, but for Haircut One Hundred fans, it was woefully so: all of the band's B-sides, whether exclusive to a single or not, were expanded on each 12" vinyl. The reissue only uses the shorter 7" versions, and omits the extended version of "Love Plus One," which is kind of crazy considering that plenty of people at the time had probably picked up the CD for that song above all.

For this Reissue Theory post, we arranged it as a two-disc set not unlike something Cherry Pop would release. (That label has good relations with Haircut frontman Nick Heyward, making them an ideal choice.) The primary disc would focus on the original album (plus non-LP single "Nobody's Fool" and a rare live version of "Fantastic Day"), while the bonus disc would focus on the 12" mixes. And there are a few, including at least one U.S.-only surprise from the vaults.

Would you purchase this set if it existed? I would, if only to buy a copy for the talented Mr. Giles.