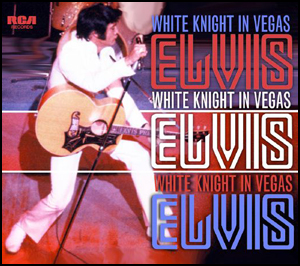 The King has returned: Follow That Dream, Sony’s “official bootleg” label for Elvis Presley catalogue projects, has announced its two newest titles for February, a live set and a vinyl reissue.

First up is White Knight in Vegas, a 1969 performance at Las Vegas’ International Hotel, the biggest showroom on the strip at the time. Fresh off the iconic NBC comeback special some nine months prior, Presley began his stint at the venue in late July, and this show captures Elvis at his showiest. Mastered from the original eight-track multitrack recording by Vic Anesini, the set is presented in a 5″ digipak (production problems prevented this set from appearing in the typical 7″ digipak) and features a 12-page booklet with rare photos.

Also up for pre0rder is a vinyl version of FTD’s limited edition of How Great Thou Art, Elvis’ second gospel LP from 1967. The original album featured the Top 5 hit “Crying in the Chapel” and was Elvis’ first with producer Felton Jarvis, who would produce all Elvis LPs for the remainder of the singer’s life. The vinyl version (released on a more densely-packed double-disc set last year) features the album and original master takes (including a soundtrack song, “Beyond the Reef”) across two records.

Each set will soon be available to pre-order at Elvis’ official Web store, with a release date of February 15. View the track lists after the jump.

All tracks recorded live at The International Hotel, Las Vegas – 8/26/1969 and previously unreleased.