How Killer Are the Queen Reissue Track Lists? 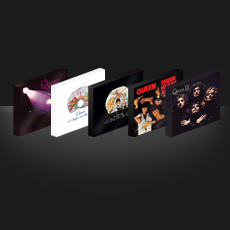 I see a little silhouetto of the track lists of the forthcoming U.K. Queen remasters, as released on the band's official site today. There was a track list posted on the Steve Hoffman forums that was taken from a Japanese Web site and perhaps too heavily devoted to the remixes from The eYe (that odd 1998 computer game with five discs' worth of remixes and instrumental tracks built into the CD-ROMs and suitable for ripping to one's iPod). Those track lists were mostly wrong, thankfully. So what are fans going to get? Let's talk after the jump.

Each disc is going to be expanded by five or six tracks, rather than a full bonus disc's worth of material. Queen gets off to a great start, including the outtake "Mad the Swine" from the U.S. reissue of the album and five of the band's long-desired demos from De Lane Lea Studios in 1971. (The other bonus track from the 1991 reissue of Queen, a "long-lost retake" of "Keep Yourself Alive," is featured on the reissue of A Night at the Opera.) Queen II collects two unreleased BBC session takes, a live cut, an instrumental of "Seven Seas of Rhye" and the non-LP B-side "See What a Fool I've Been."

Sheer Heart Attack focuses on live tracks, BBC sessions and an a cappella track, but here's where things get odd: one of those live cuts is wildly superfluous, coming from the band's already-released Wembley Stadium concert in 1986. Likewise, A Night at the Opera includes a live cut from Live Killers amid the mostly instrumental and a cappella mixes. A Day at the Races concludes the initial batch of reissues, featuring mostly live cuts (including the Top of the Pops version of "Good Old-Fashioned Lover Boy") and a remix of "Teo Torriate" from a Japanese compilation.

Altogether, there are only about six tracks that have already been previously released, and some of those tracks had never been released in the band's native U.K. in the first place. Overall, this writer would have to say that these expanded editions are certainly preferable to their U.S. counterparts released some two decades ago. Sure, it would have been nicer to have gotten truly deluxe editions, but this batch might not have fans dreading what "bonus material" is yet to come. Have a look for yourself below.