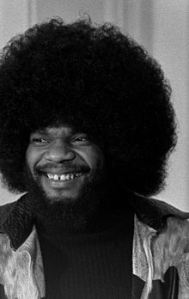 Interest in Billy Preston has piqued in recent years thanks to reissues of his work with The Beatles ("Get Back," of course one of the last great hits on The Fab Four's recent, Grammy-winning remasters) and beyond (two albums for The Beatles' Apple Records, reissued last year). Now, ABKCO goes a bit deeper into the vaults to release, for the first time in years, Preston's first album.

16 Year Old Soul, released in 1963 on Sam Cooke's SAR/Derby label, captured Preston at the very beginning. He had impressed Cooke with his session work on Nightbeat earlier that year, and so was rushed into the studio to cut his own LP months later. It was the first stepping stone to a career that included rubbing elbows with Leon Russell and Delaney Bramlett on the television show Shindig!, becoming the only artist to be credited next to The Beatles on a single and many more great R&B moments that live on even as Preston is no longer with us (having passed away in 2006 at the too-young age of 59).

The release, which will be available to all digital retailers on February 22, includes all of the original tracks from 16 Year Old Soul plus two bonus rarities. Read the press release and track listing after the jump!

Billy Preston's historic debut album from the archives of Sam Cooke's legendary label set to resurface after more than 45 years in the vaults.

ABKCO Records will release 16 Year Old Soul, the album that launched the recording career of the remarkable Billy Preston on February 22.

The release marks the album's availability for the first time in more than 45 years.

16 Year Old Soul reflects the legacy of Sam Cooke's SAR label, one of the first African American-owned and operated record companies, and was recorded as a result of the enthusiasm that Cooke and J.W. Alexander, his SAR partner, evinced for the young Preston. To their brilliant ears, the teenage Billy Preston was the embodiment of the term "musical prodigy."

Cooke and Alexander had, in fact, tapped Preston to play on the sessions for Cooke's legendary Nightbeat album, recorded in February of 1963. They were so taken with his manifest talent that they immediately signed him to a recording deal with Derby Records, SAR's sister label. Just one month later, the sessions for Preston's very first album, 16 Year Old Soul, took place and the record was rush released that June. Thus, this historic album highlights the brilliance of a pop/rock/soul/gospel legend at the start of his ascent to stardom.

In 1958, before his career as a key collaborator with such major artists as the Beatles, the Rolling Stones, Sam Cooke, Ray Charles, Little Richard, Aretha Franklin, Bob Dylan, the Jackson 5, Barbara Streisand and many others, the stage was set when an 11-year-old Billy Preston portrayed W.C. Handy, "The Father of the Blues," as a child in the film St. Louis Blues. Nat "King" Cole starred as the adult Handy. Soon thereafter, and prior to the recording of 16 Year Old Soul, Preston began gaining wider recognition in both gospel and R&B circles.

16 Year Old Soul is an album of percolating organ-fueled instrumentals that offers insight into the roots of one of the music world's most innovative and genre-busting stars who died at the age of 59, in 2006. With songs covering a broad spectrum of styles from country ("Born to Loose") to R&B ("Good News") to jazz ("God Bless the Child") with pop and blues undertones aplenty, 16 Year Old Soul is a preserved-in-amber glimpse of an artist whose musical maturity belied his years.

Preston's strong relationship with the Beatles -- he is the only artist to ever share billing with the Beatles at their direction on a record label ("Get Back" is credited to 'The Beatles with Billy Preston') -- led to an Apple Records contract and the hit "That's the Way God Planned It." His backing band on the record was Keith Richards (bass), Eric Clapton (lead guitar), George Harrison (rhythm guitar) and Ginger Baker (drums). He performed the song at Madison Square Garden at The Concert For Bangladesh. He later toured with the Rolling Stones in the 1970s and backed the group on numerous albums including Sticky Fingers, Exile on Main St., Goats Head Soup and Black and Blue, which made Preston the only outside musician to have played with both the Beatles and Rolling Stones.

Similarly, 16 Year Old Soul showcases an all-star backing group featuring legendary drummer Earl Palmer with Clifford Hils on bass and Eugene Edwards on piano. Later in his career, when he was signed to A&M, Preston's instrumental side shone through once more with his #1 Billboard R&B hit "Outta Space."

16 Year Old Soul, a kind of musical time machine, offers Billy Preston fans a unique opportunity to gain insight into the roots of a great artist who can only be defined as the "musician's musician."