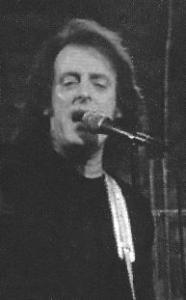 Shondells frontman Tommy James has been fairly well-represented on CD, with reissues from both Collectors' Choice and Collectables compiling most of his classic oeuvre. Now, the U.K.'s Angel Air label takes its turn filling in more gaps in James' catalogue with a trio of reissues. First up are a pair of two-fers, In Touch (1976) with Midnight Rider (1977), and Three Times in Love (1980) with Hi-Fi (1990), followed by an expanded edition of A Night in...Big City: An Audio Movie (1995).

In Touch and Midnight Rider were recorded for San Francisco-based Fantasy Records upon James' departure from his longtime home, Roulette Records. James collaborated with ex-Shondell Peter Lucia to write "Calico" for In Touch, and the album also featured James' own version of his "Tighter, Tighter." A hit by Alive 'n Kickin' at Roulette, it remains an oldies radio staple today. Also notable is the Kenny Laguna/Ritchie Cordell production of Gary Glitter's "(Do You Wanna) Touch Me," which they would later record on Joan Jett.  Cordell, of course, was a longtime James collaborator and one of the co-writers of "Mony Mony." James took a different approach for its immediate follow-up, Midnight Rider, turning to veteran Jeff Barry to produce. Barry, of course, gave Tommy James his first hit with "Hanky Panky," written with Barry's then-wife Ellie Greenwich. James, always a strong songwriter in his own right, contributed "Keep it in the Groove" and another highlight of the album, "Love is Gonna Find  a Way."  The album has some Eagles influences, and Timothy B. Schmit even makes an appearance, as does Michael McDonald.

The second two-fer spotlights James' work at the very beginning and tail end of the 1980s, although the latter (released in 1990) has more of the production hallmarks of the '80s than the former. Three Times in Love, on the Millennium label, yielded James' last chart hit to date when its title track, written by James and Rick Serota, hit No. 19. "Three Times in Love" was James' first chart placement in eight years, and fared even more impressively on the Adult Contemporary chart, where it landed at No. 1 for one week. Michael Brecker and Luther Vandross are among the album's guests. Hi-Fi was James' first effort in nearly a decade, and was released on the indie Aegis label. It's heavy on synthesizers, but showed that James' vocals and pop instincts hadn't diminished over the years.

Five years later on his own Aura imprint, James released A Night in Big City...An Audio Movie, an offbeat concept album combining songs with spoken dialogue in the style of a radio play. While the album's plot is oblique, there are a number of songs that shine, including remakes of "Tighter, Tighter" and a New Wave-style take on "I Think We're Alone Now." "Madd Blue" and "Blue Bird" are eccentric tracks far-removed from James' familiar pop sound. In addition, the album reunited Tommy James with Jimmy "Wiz" Wisner, the original arranger of "I Think We're Alone Now." The new edition is expanded by eight bonus tracks, but Angel Air's catalogue entry indicates that the dialogue tracks have been dropped, perhaps for a more cohesive listening experience. Some would find this a preferable way to enjoy the music.

Three Times in Love/Hi-Fi is already available, In Touch/Midnight Rider arrives in stores on March 8, and A Night in...Big City is due April 12 from Angel Air.  Hit the jump for track listings as well as ordering and discographical information!