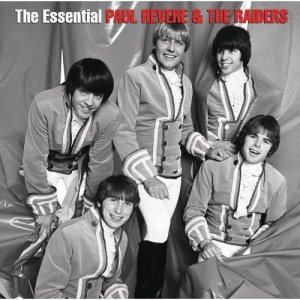 If you've been around Amazon lately, you might have known that the previously mentioned entry for Paul Revere & The Raiders in Legacy's Essential series has a track list.

The two-disc set is due out in two weeks, but fans have certainly been wondering what this set will have that others before it (namely Collector's Choice Music's three-disc Complete Columbia Singles) did not. The first blurb Legacy released about the product promised promo-only tracks and some mono single mixes, all curated by Bob Irwin of Sundazed Music. Of course, Amazon's track listing isn't going to point out the intricacies of each tune.

So we're going to do something a little different: the track list is after the jump, albeit without discographical comment. We can't differentiate which mixes are different, so for now we'll just give you the songs on each disc. Have at it in the comments!