Back to the Grid: “TRON: Legacy” Remixes Coming in April 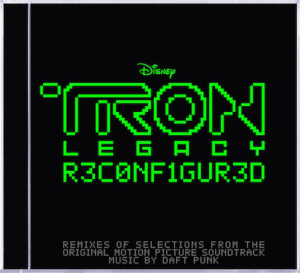 It’s not often here at The Second Disc that we get to report on a reissue project devoted to a release that’s only three months old.  But that’s just the case of Daft Punk’s acclaimed score to Tron: Legacy. The novice film composers deftly paid homage to Wendy Carlos’ score to the original TRON, judiciously incorporating it into their work while carving out their own territory with a mix of ambient sounds, techno-style synthpop and traditional orchestral motifs. While the Academy Awards overlooked the duo’s hybrid electronic/orchestral score, it became the first soundtrack in five years to crack Billboard‘s pop Top 10, and sold over 70,000 copies in its first week of release, which is none too shabby a number these days. Fans of Guy-Manuel de Homem-Christo and Thomas Bangalter, a.k.a. Daft Punk, might have hoped that any catalogue news relating to the TRON: Legacy soundtrack would involve a wide release of the two-CD limited edition briefly available in the U.K. which contained five bonus cues. (Frustratingly, to compile all of the existing TRON: Legacy content involves getting not only the U.K. set, but one track from Amazon.com, two from iTunes and one from Nokia.) Instead, Walt Disney Records will on April 5 release TRON: Legacy R3c0nf1gur3d, a 15-track remix project. Unlike so many remix albums, though, this one sounds like a no-brainer given Daft Punk’s roots as DJs and great innovations in that field.

Paul Oakenfold, The Crystal Method and Moby are among the top-tier artists enlisted to remix Daft Punk’s tracks on R3c0nf1gur3d. The album will be released to traditional retail, but will also be available in an array of packages with bonus material. Intrigued? Hit the jump for full details plus pre-order information and the track listing!

The official TRON: Legacy soundtrack site is offering R3c0nf1gur3d in a variety of exclusive formats. The CD can be purchased in a bundle with the five-disc, two-movie (BD, DVD and Digital Copy) collection and the TRON: Betrayal graphic novel. Those who take this option will also receive the album as 320 kbps MP3s and can add on an exclusive 27″ x 39″ Daft Punk glow-in-the-dark poster (how apropos for TRON, no?). More tantalizing, though, is the “Collector’s Digital EP” with “unreleased tracks” and “alternate takes” as 320 kbps MP3s which is part of the bundle. Will the EP repeat the tracks previously available as retailer exclusives or on the U.K. limited edition? It’s as yet unclear, but the EP will only be available through the website, and will not be released physically. This package retails for $89.98 without poster, and $99.98 with poster. The digital EP is available in other bundles, as well, all with the poster optional. One features everything above with the 3-D Blu-Ray combo pack replacing the 5-disc box ($69.98/79.98). A third physical option is built around the 2-disc combo pack (Blu-Ray plus DVD) for $59.98/69.98. For the single disc DVD option, the fourth bundle costs $49.98/59.98.

Without the bonus digital EP, TRON: Legacy R3c0nf1gur3d will be available from all of usual suspects, physically and digitally, on April 5, the same date that the film itself streets on DVD and Blu-Ray. The original 1982 classic also returns to DVD and makes its Blu-Ray debut on the same date! Amazon.com’s pre-order link to R3c0nf1gur3d can be found below!

All remixes are previously unreleased.